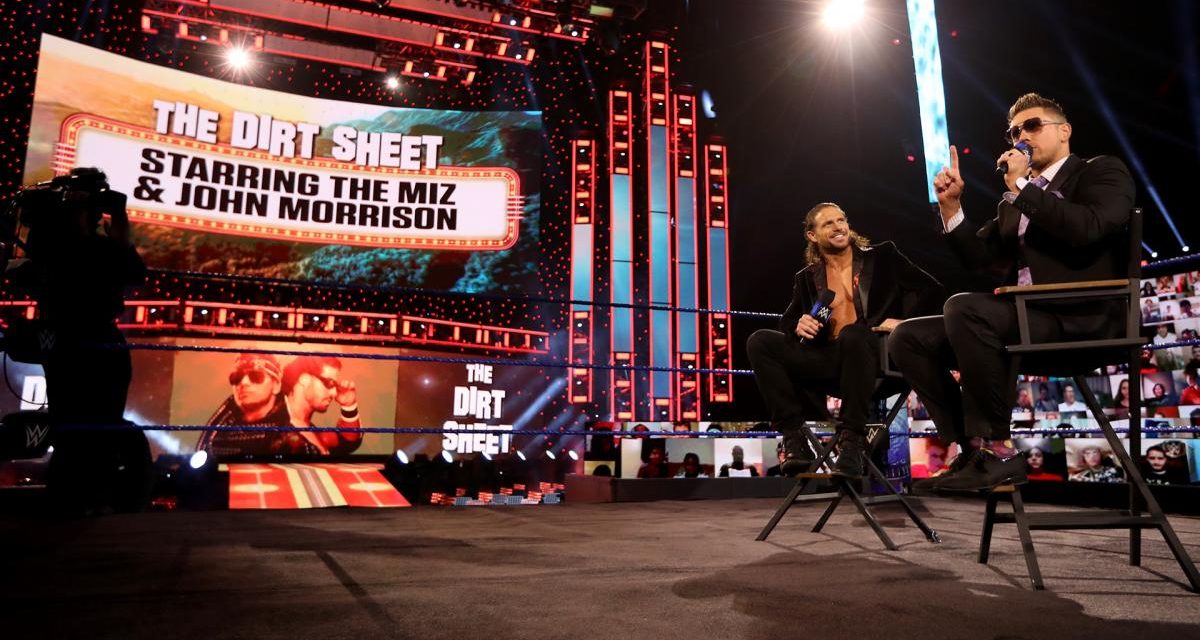 Featuring a Samoan Street Fight and an interview with Sasha Banks, this September 18th edition of SmackDown features pretty much the same thing as last week.

We kick off the show in the best way possible, with an episode of The Dirt Sheet. The Miz and John Morrison promise to reveal the reason behind Bayley’s attack, to talk about Sami Zayn and Jey Uso, but first, they address Mandy Rose’s move to Raw, caused apparently by The Miz. The word around town is that The Miz did that as a petty attack to Otis, but he says this is completely wrong. The Awesome One claims that he had Mandy moved to Raw to help Otis focus on using the MITB Contract correctly.

Otis finally comes out to shut up The Miz and Morrison, taking them both out and trashing the Dirt Sheet set. Tucker comes in to help, and Otis delivers a Caterpillar and a Vader Bomb to The Miz. Otis strips the poor Miz down to his tighty whities, after which he runs out of the ring area embarrassed.

Backstage, Kayla Braxton asks The Miz if he regrets antagonizing Otis, but before he can answer, he gets a phone call. He says something about some plan coming together, and then splits with Morrison.

How many times will these guys go at it? Nakamura enters with a pretty sick mask, and I question again why those two don’t have a tag theme yet.

Cesaro starts off strong but Metalik is too fast, delivering a spinning headscissors to the Swiss Cyborg. Lince Dorado and Kalisto argue on the outside about what Metalik should do next, allowing Cesaro to take advantage with a big slam. He beats Metalik down with his signature uppercuts, and delivers a massive lariat for 2. 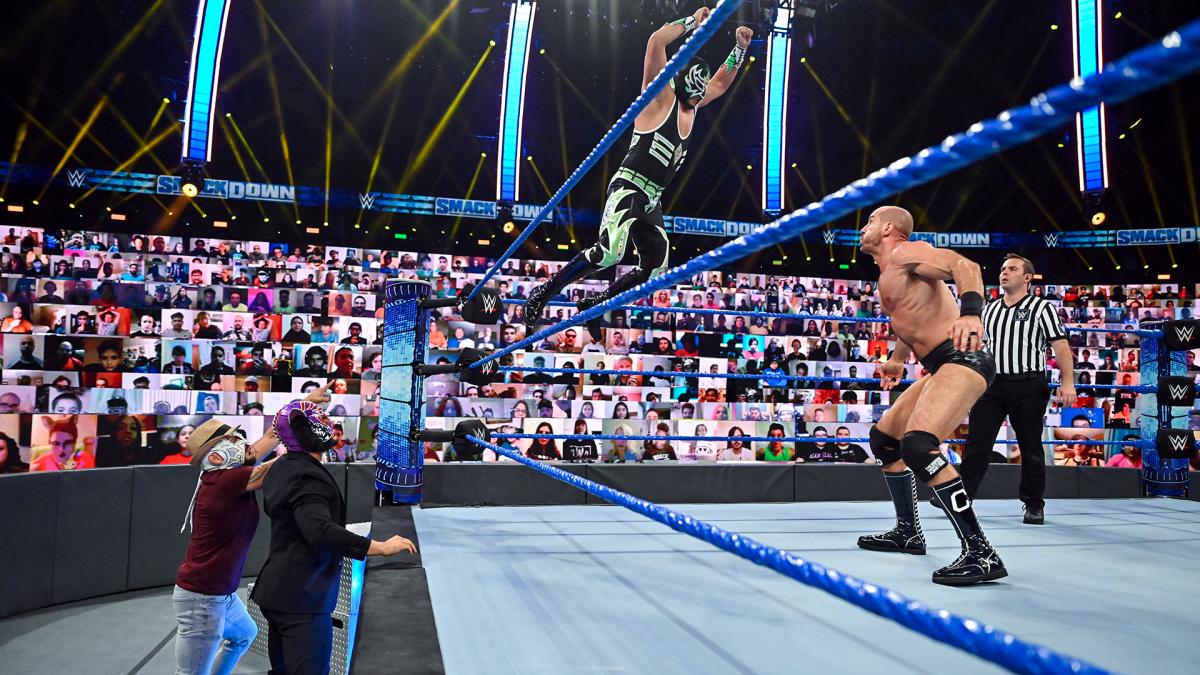 Cesaro locks in a submission, but Metalik fights out and delivers an enziguri. His partners argue again about what he should do, and the ref throws them both out, giving Cesaro another opportunity to strike. The tag champs shoo the Lucha House Party out of the ring, and Metalik flies with a Swanton from the top rope to Cesaro on the floor as we go to commercial.

When we come back, Gran Metalik is fighting out of a submission with a kick, but Cesaro answers with his own boot for 2. Cesaro sets Metalik up on the top turnbuckle and looks for a superplex, but Metalik pushes him off and hits a huge hurricanrana. He looks for a moonsault but gets caught with Cesaro’s boots right under his chin. The Swiss Cyborg smashes Metalik with an uppercut and then hits him with the Neutralizer for the win.

Backstage, Kayla Braxton interviews Jey Uso about how Roman Reigns acted last week in their tag match. According to Jey, Paul Heyman called it a miscommunication. Apparently the two will be perfectly fine in their tag match tonight. You can hear people talking in the background for some reason.

And now, it’s time for a Moment of Bliss with Nikki Cross. Alexa Bliss is very proud of Cross, but is a little skeptical. She wants to know what Cross’ game plan is, seeing as how she’s never beat Bayley. Cross says this’ll be different this time, since Sasha won’t be at ringside. Cross says she has a question for Bliss: what’s going on with you? She wants to know why Bliss used the Sister Abigail on her. Before she can answer, Lacey Evans interrupts them. She comes out and blames Bliss for “throwing her off her game” with her creepiness during the Fatal Four Way. She also says that Cross will never beat Bayley because she’s “too nice.” Cross responds by attacking her, and they head to the ring to commence their match.

With Alexa Bliss on commentary, Evans runs out of the ring instantly to apply some hand sanitizer. Cross runs out after her, but Evans sweeps her leg. She looks for an elbow, but Cross applies a sleeper hold. Evans runs her into the corner, and Cross fights back with a flying crossbody and a rollup for 2.

Evans targets the left arm of Cross, driving her knees into it and tying it up in the ropes. As the Sassy Southern Belle stomps Cross in the corner, Alexa Bliss uncorks a deadly and oddly specific insult on her, saying that “she’s one of those people who sends her food back at the restaurant multiple times, and then as she leaves, fills up her purse with mints.”

Evans hits Cross with a Bronco Buster for 2 and begins to get frustrated. She continues to target the arm of Cross with a submission. Cross fights out but gets hit with a crazy lariat. Nikki tries to get fired up, but Evans goes back to the arm, and then hits a standing moonsault for 2.

Evans grabs her sanitizer and sprays it in the eye of Cross, which may be the most extreme move ever seen on WWE TV. Cross finally gets a second wind, delivering an avalanche and a series of forearms. She stomps the hand of Evans and delivers a thunderous tornado DDT, and then delivers her rope-hung neckbreaker for the win.

After the match, Lacey yells at the commentary team, asking Bliss if she’s gonna go get The Fiend. Bliss goes into that trance-like state again, and delivers the Sister Abigail to Evans and walks away. 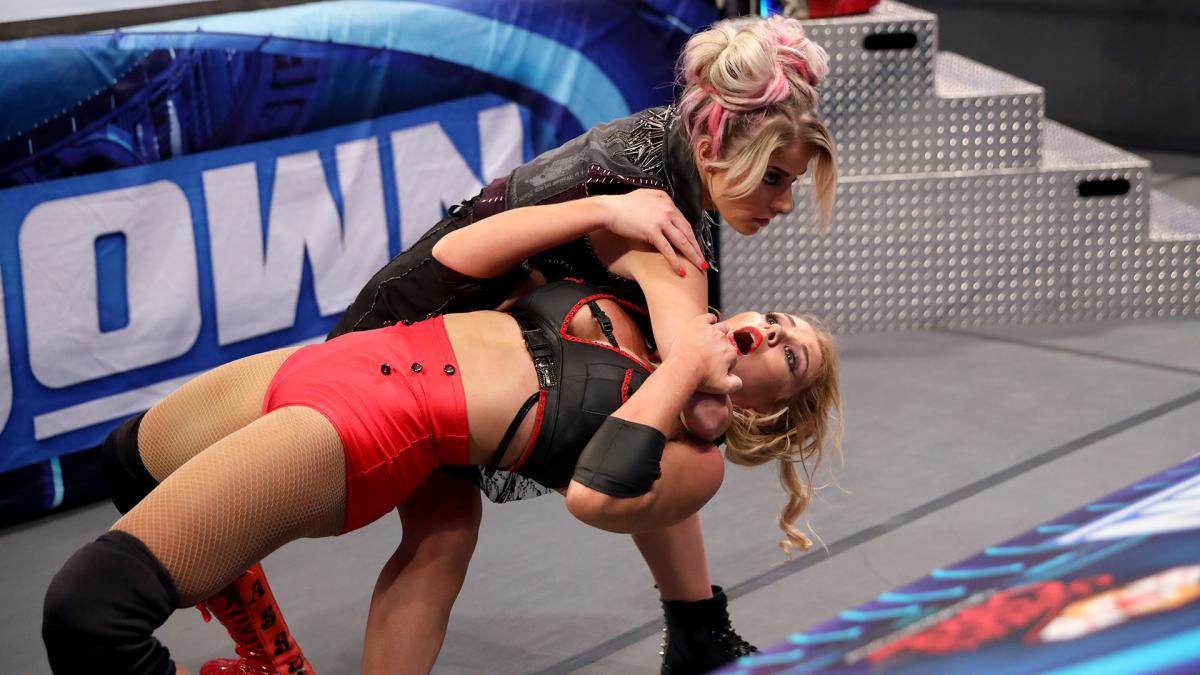 At the Performance Centre, Sasha Banks, who recently appeared in the trailer for Season 2 of Disney’s The Mandalorian, breaks her silence. She’s very hurt by Bayley’s words last week, and can’t help but be emotional as she sits in the Performance Centre, a place that she and Bayley trained together. She has some hurtful words of her own, saying Bayley is nothing without her, and that she’s going to take her SmackDown Women’s Championship. Bayley, somewhat predictably, attacks her from behind with a chair, but is taken away by security before she can really do anything bad.

Sami Zayn is, once again, not introduced as the Intercontinental Champion, but as he’s arguing with the announcer, Styles jumps him from behind. Styles gets him back to the ring and delivers an ushigoroshi and a backbreaker for 2. Zayn rolls outside, and does the ole’ “go back in the ring and hit the guy when he follows you” spot. He plants Styles with a DDT for 2, and then locks in a headlock.

Styles back Zayn into the corner as the commentators go on about how Sami never even gave an explanation as to where he disappeared to, which makes me livid. You wanna know where he went? Sami Zayn left due to concerns surrounding the COVID-19 pandemic, and in his spare time, worked with SAMS and re-started the “Sami for Syria” fundraiser, to give humanitarian and medical aid to Syrian refugees fleeing Dara’a. He has raised over $66,000 so far to fund mobile clinics that have given medical treatment to over 11 000 refugees. They’ve talked about his work in the past, but now they’re pretending like he did nothing while he was gone because he’s a heel. Absolutely ridiculous.

He sends Styles to the outside, and looks for a Helluva Kick, but he crashes into the post. Styles smashes Zayn with the Phenomenal Forearm on the outside as we go to commercial. When we come back, Zayn is looking for a superplex, but Styles slips underneath him and pulls him into the turnbuckle. Zayn ducks a Phenomenal Forearm and hits a Stun Gun. Zayn looks for a suplex, but Styles counters with a neckbreaker for 2. Zayn fights back with a jawbreaker, but Styles delivers the Phenomenal Blitz and a Pelé kick. Styles goes for a suplex but Zayn counters with a Blue Thunder Bomb for a very close 2. 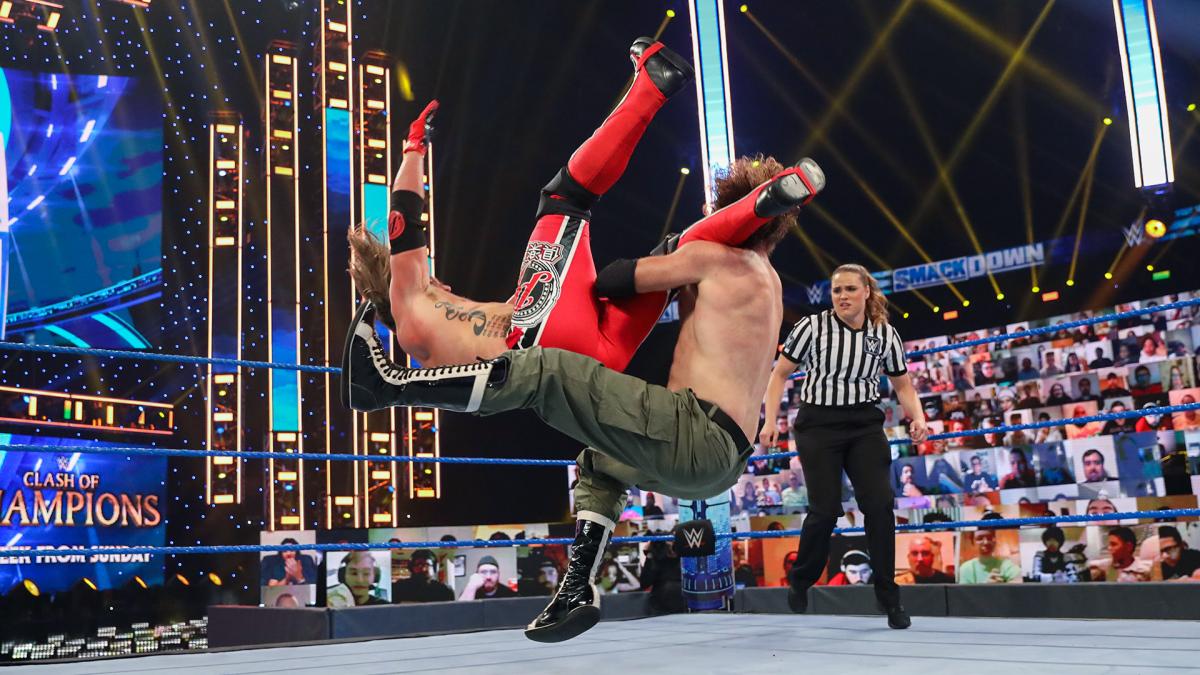 Styles tries to roll into the Calf Crusher, but Zayn rolls out and delivers an exploder suplex into the corner. Zayn looks for the Helluva Kick, but Styles rolls around it. Zayn rolls Styles up using his tights, and the ref catches him, but when Styles does the same thing, the ref doesn’t catch it, allowing Styles to get the 1-2-3.

Zayn gets mad, telling the announcer to say he’s still the champ, but Jeff Hardy comes out and attacks both Zayn and Styles. He sets up a ladder and looks to crash onto Zayn, but Sami rolls out of the ring. Jeff gets a mic and says he’s tired of all the controversy about the Intercontinental Championship, and challenges both Zayn and Styles to a Triple Threat Ladder Match at Clash of Champions.

Backstage, Otis rages about The Miz and John Morrison to his friend Tucker. A backstage worker comes in with a package and the unfortunate news that Otis is being served a lawsuit, which is from The Miz and Morrison. I knew The Miz has backstage connections, but the amount of strings that must have been pulled to sue someone for attacking you in an industry based on attacking people must have been crazy. The suit says that Otis must forfeit the MITB contract or face Miz and Morrison in court, and he has one week to decide.

Backstage, King Corbin and Sheamus are preparing for their tag match when the security guard who helped Sheamus attack Big E two weeks ago informs Sheamus that his car is being towed. He runs out to the parking lot only to find Big E, from whom he barely escapes. The security guard isn’t too lucky, as Big E puts him through the windshield of a car and locks him in its trunk.

Roman Reigns makes his entrance. Paul Heyman tries to begin his spiel, but Roman Reign takes the mic. He simply says that this is his WWE, and if you want it, you’ll have to come and take it from him.

Jey looks to take out Corbin, but he’s instead met with a Deep Six. Corbin goes back in the ring after Roman with a chair, but Roman uses it against him. Roman grabs a table from under the ring, but Sheamus nails him with a bicycle knee. Sheamus and the King double team the Tribal Chief, tossing him over the announce table. They set up the table in the ring, and they powerbomb Jey through it for a close 2.

Roman takes Corbin out with an office chair, but Sheamus takes him out with an ax handle. He looks to drive him through the table with White Noise, but Roman escapes it and delivers a Samoan drop onto the table. The Universal Champion throws Corbin into the ringpost, and then spears Sheamus through the barricade. Corbin fights back however, slamming Roman into the steel steps. Jey attempts a suicide dive on the King, but he gets caught and tossed into the timekeeper’s area.

Corbin rolls Roman back into the ring and looks to use his scepter against him, but Jey smashes the Universal Championship off of the back of Corbin. Roman and Jey then deliver a Spear-Uso Splash combo on Corbin for the victory. Jey is hyped up after their match, but Roman simply stares him down with a deadly gaze to end the show. 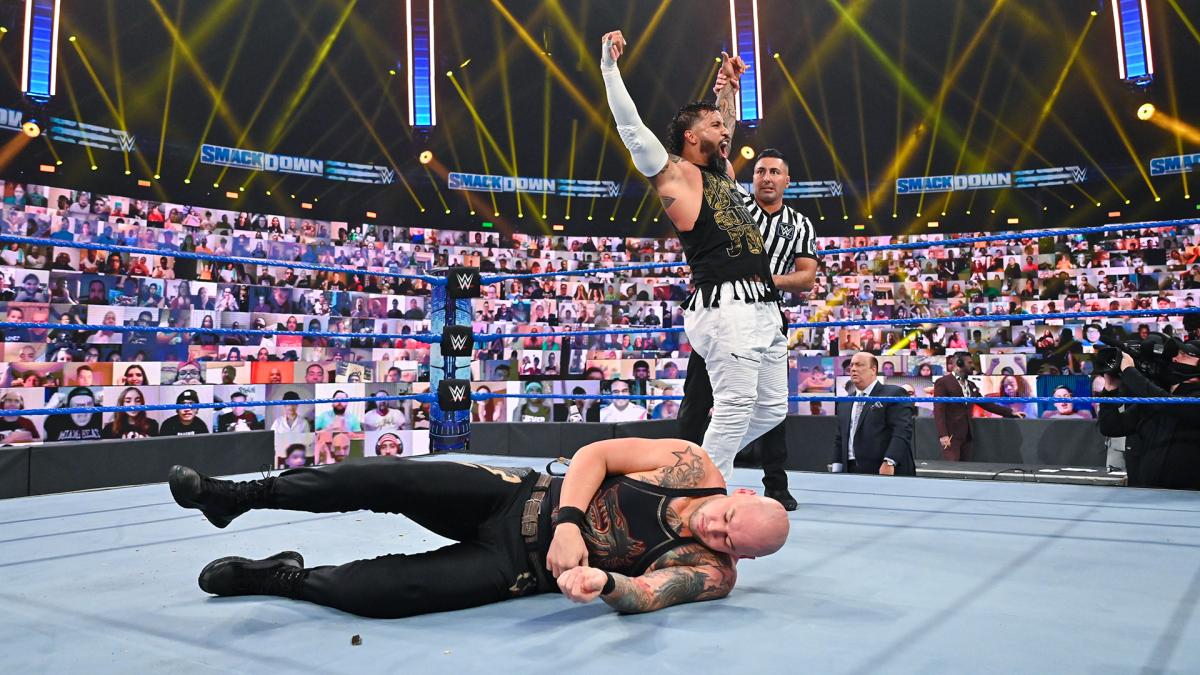 The matches were good enough, but it was pretty much the exact same thing as last week. I get that there are long term storylines in place, but seriously? The same teams in the main event? The only difference between this main event and last week’s was a stipulation.