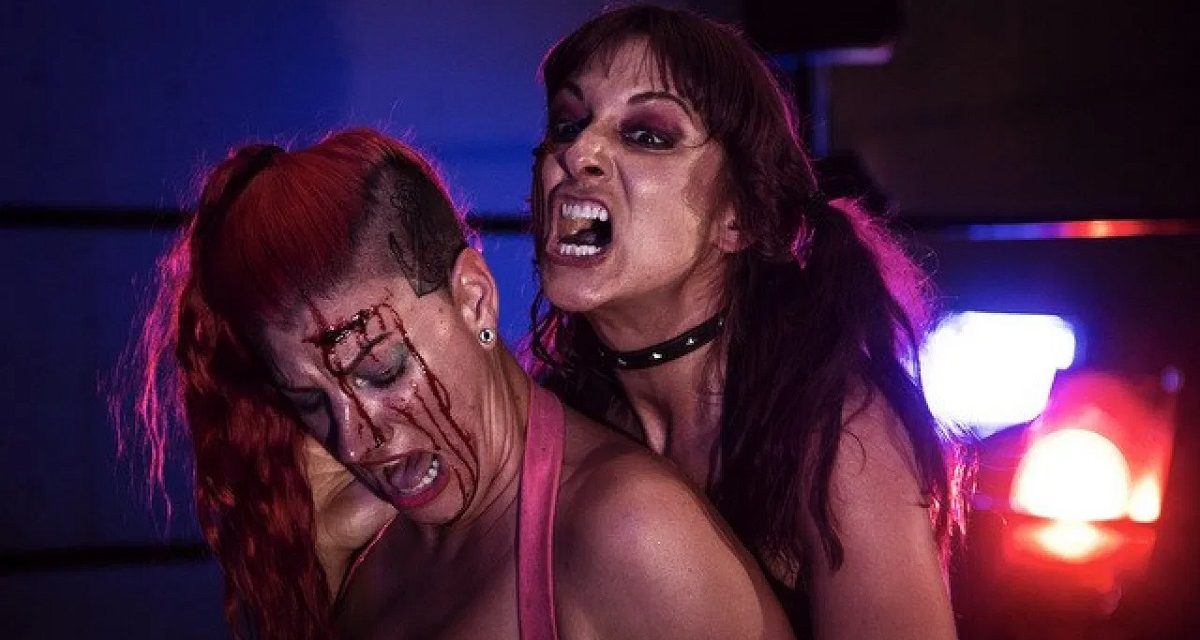 Have you ever watched a movie trailer and thought to yourself, ‘That seems interesting! I’d watch that movie!’?

So those were my exact thoughts when I watched the trailer for the horror movie Parts Unknown. My initial impression was that the movie would be about a family of pro wrestlers, who after years of putting their bodies on the line, decide to exact bloody revenge on ungrateful pro wrestling fans. Combining my two favorite things: horror and pro wrestling with an intriguing premise sounded like a good time to me. So, I excitedly grabbed some snacks and anticipated a fun afternoon.

Unfortunately, that’s not quite the movie I got to see. 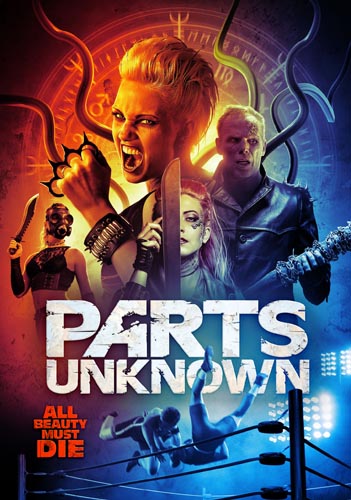 Parts Unknown does feature a wrestling family, the Von Strassers, but the story doesn’t quite unravel how I thought it would, which is a shame. The movie opens with Herman, the oldest Von Strasser brother (played by William DeCoff), in a match at an indy wrestling show. We later find out he has a sister, Kitty (Sarah Michelle) and two brothers Karl (Stephen Cwiok) and Harvey (Alexander Hauck) also involved in the family business. Their father and chief wrestling trainer apparently killed himself and mom is never mentioned.

Anyway, Herman is in the match and he gets angry that most of the fans are looking at their phones instead of the action in the ring, so naturally he angrily responds by cutting his opponent’s throat with barbed wire. This is a horror film after all!

Herman has to serve some time for his actions, although he gets away with a manslaughter charge and is soon released from prison. When he returns to the family home, a lot of things happen in a very short period of time. Officer Mary Price (Alexandra Cipolla) is waiting for him. Harvey, who has taken a lot of chair shots and thus is not the sharpest knife in the drawer as my father would say, ends up killing Mary. Not a good way to start your first day out of the pen! So, Herman and Harvey decide to get rid of Mary’s body at a nearby swamp, which also seems to be a site attracting evil activities.

It turns out Mary isn’t actually dead. Not sure why exactly. But to prove how alive she is, she spits a lot of blood from her mouth, via an obvious hose, on Harvey and then runs away, as one does. And then this weird, alien entity known as The Holiness appears clad in the worst possible costume. I get this movie is on a budget, we all are, but this ensemble looks like it was either taken from the clearance section or more likely the damaged returns pile from a Spirit Halloween store. The Holiness, apparently created out of all of the evil taking place at the swamp is voiced by Jake “the Snake” Roberts, but don’t get too excited that’s the only remotely positive thing about this movie. The Holiness requests human sacrifices from Herman and in return Herman gets the “power that you seek.” Herman agrees. 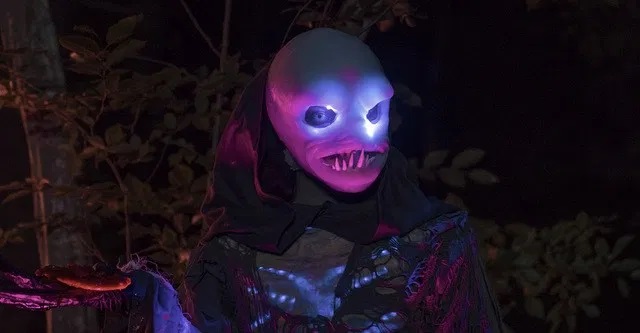 The Holiness – voiced by Jake Roberts – showing off his discount duds

In the meantime, Carl, having just been released from a big wrestling promotion for drug use, decides to kill himself with Mary’s gun. Despite witnessing her brother’s suicide, Kitty just leaves his body in the living room and goes to have a First Blood match against her bestie, Lacey Tormada (Lizzie Havoc). Not sure why Kitty refers to Lacey as her bestie since she ends up cutting off Lacey’s nipple in the match. Yep you read that right! This movie is beyond trash! And that’s not the worst thing Kitty does to Lacey in this movie. Just keep reading if you can stomach it!

Mary, having run away from the swamp, discovers she is now immortal. She finds a box labelled “Mother of Mercy” at her house, which contains this strange wrestling garb that seems to also be a slutty virgin Mary costume. I hope Spirit Halloween gets a credit in this movie! She then visits a new age book store to see a hippie guru in order to figure out her purpose in life. The guru tells her that the swamp entity thingy is gaining power and Mary, whom she says is the entity’s polar opposite, is the world’s best chance at stopping it! The guru then abruptly dies, although it’s an odd death. We don’t see a killer and yet somehow her intestines are all sticking out.

So back to the sacrifice subplot. Lacey, having just had her nipple cut off by her best friend, agrees to help Herman and Harvey find sacrifices by luring men to come over to the house for sex via the Tinder app. For some reason, Lacey now relies on an oxygen tank. I guess that’s what happens when someone cuts off your nipple, good to know. So, Herman and Harvey have three guys (which doesn’t seem like an impressive number to me but I’m not the evil entity making this request so carry on) that they take to the swamp to sacrifice. And by sacrifice, I mean Herman pummels them with a barbed wire bat in a very fake and gentle fashion, but it results in their deaths so this atrocity continues. The Holiness reappears and tells Herman he needs a final sacrifice and this time it has to be an unborn child. So naturally Herman finds and kidnaps a pregnant woman and The Holiness removes the fetus with its gross branch-like hands. I’m so going to have to wash my eyes out with lye when this is over.

Just a quick side note, I promised earlier that Kitty does something much worse to Lacey. Well, while the brothers are at the swamp sacrificing away, Kitty returns home and attacks Lacey. Kitty’s motives seem to stem from jealousy but honestly, she is just plain crackers and loves her some cocaine, so it’s hard to say for certain. Kitty ends up raping and killing Lacey with a strap-on covered in razor blades. Zoinks! This is definitely the worst friendship ever!

Okay so, where was I? Oh yes, we have our final soul, the movie is over, right? Wrong! The Holiness is greedy and demands one more sacrifice! Mary arrives to try and stop The Holiness, but alas Herman kills himself and fulfills the demands. Not sure why he does this as he doesn’t gain his reward of ultimate power this way, but the movie is almost over so I don’t really care.  The Holiness glows brightly and then disappears, this is how it apparently achieves world domination. The residents of the world suddenly get violent urges and the power goes out everywhere. Mary is sad she couldn’t stop The Holiness. The credits roll and this movie watcher can’t believe what she’s just witnessed. 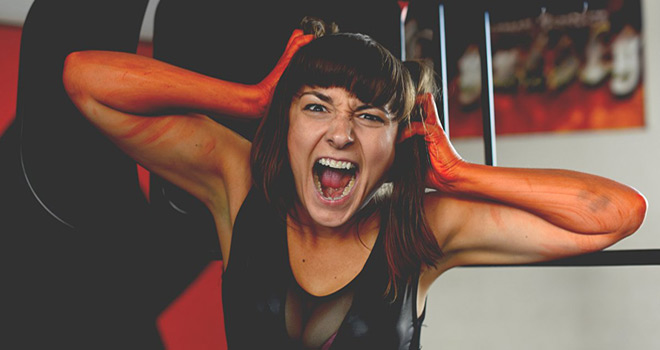 Is this the “make it stop” face of an actor or someone watching the movie?

There’s an acronym I learned in journalism school that can be applied to more than just writing. It’s KISS:  aka Keep It Simple Stupid. Parts Unknown could have been a better and more effective movie if things had been kept simple and they just stuck to the premise promised in the trailer. I expected and wanted to see a horror movie about a pro wrestling family seeking revenge on ungrateful pro wrestling fans. And just to clarify, I’m not a movie snob. There are plenty of horror movies that are so bad, they’re good and I relish them. I’ve enjoyed plenty of cheesy, independent horror flicks and the odd exploitation ones, but this flick was just plain bad!

And there was no need for the supernatural components at all! Yes, that means no Jake Roberts, but he was just the voice of The Holiness and if I hadn’t seen his name in the credits, I wouldn’t have known that voice was his as the people involved in this movie decided to modify/garble his voice so it’s not immediately recognizable and thus defeats the entire purpose of involving him in this movie in the first place! Whew, that was a big rant! In closing, I was anticipating a cheap, gory, but fun revenge flick. There was no fun to be had here. Instead I got a trashy, low brow and sleazy flick that was a chore to watch.  Sigh, at least my movie snacks were good.