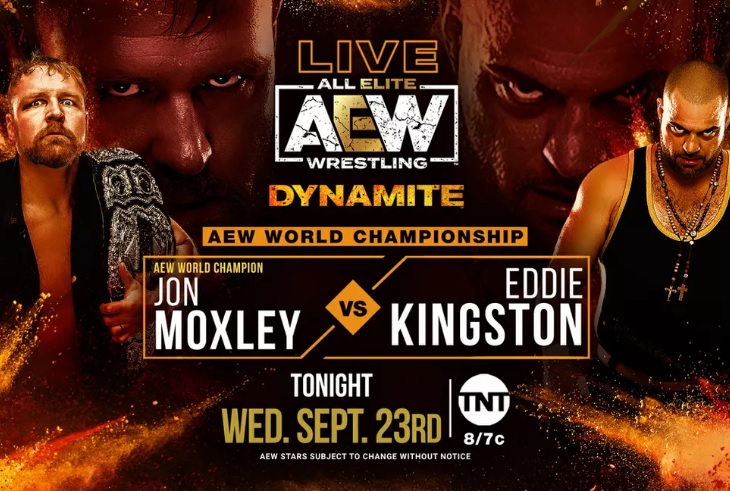 Sometimes even the threat of COVID-19 can mess up the best laid plans. Case in point: Lance Archer was supposed to face Jon Moxley for the AEW World Championship tonight. But because he reported being in close contact with someone who tested positive for the virus, Archer had to go home and former indie darling Eddie Kingston gets the opportunity instead. While it stinks for Archer, it’s a fun twist for tonight’s episode of AEW Dynamite, which comes to us as it has been for months from Daily’s Place in Jacksonville.

Thankfully, AEW doesn’t beat us over the head with the idea that Janela and Penelope Ford, Sabian’s soon-to-be-wife, used to have a thing, but it’s relevant here. Even more pressing, though, is that this is the in-ring AEW debut for Miro. He certainly has not missed leg day or any other weightlifting day since leaving WWE, because he looks jacked. He also get the victory for his team, making Sonny tap out to what Jim Ross calls the Accolade but is apparently now called Game Over.

Passing the winners on his way out, Eddie Kingston wants to inform everyone who may not have already heard that he’s getting the title shot against Jon Moxley. His insistence that he was never eliminated from the Casino Battle Royal appears to have paid off. Drawing a line between himself and someone who “sold his soul to the devil” of sports entertainment, Kingston asks for Mox to join him for a staredown. That’s not exactly what he requested of course, but that’s all that happens before referees and officials come out to pull them apart.

In what is turning into an ongoing bit, Kenny Omega joins the announcers to help call Page’s match and insists he is done with tag team wrestling for now. Cool. We get it. Props to the wrestlers who make up the ringside crowd for chanting “Cowboy Stuff,” a sanitized version of Page’s actual catchphrase. When Page is thrown to the stage side of the ring, Omega teases having to make a decision about getting involved to neutralize the other members of the Dark Order licking their chops to get in a shot, but Evil Uno sends them all to the back. Omega’s sly jabs at both wrestlers make one wonder if he is still teasing a full heel turn, but we’re probably not going to find out if that’s the case tonight. Page wins with a Buckshot lariat, and Omega professes his pride in his ex-partner. Can’t see if he’s winking or not.

Earlier today, Tony Schiavone went to interview the Young Bucks, flinching when Matt Jackson comes out to talk. He admits the Bucks have been out of line and promises they will do better, but he objects to questions about FTR and smashes Tony’s phone. At least he throws a pile of hundreds at him to get a replacement before shutting the door.

Unlike Evil Uno, Lee has no problem with his minions hanging out at ringside, but as he is wont to do, Cassidy is able to overcome their shenanigans — at least for a while. The narrative of this bout is that Cassidy makes a huge rally after being dominated early, but in the end, John Silver’s interference costs him this title shot. Sorry about your damn luck, Orange. I heard a wrestler say that once.

After Lee’s win, the lights go out and some familiar music hits. Cody is back, and he is no longer blonde. Maybe he’s too busy kicking butt to color his hair. He takes out some frustration on two members of the Dark Order, which will likely be something we see repeatedly over the weeks to come.

Following a commercial break, Lee is clearly furious at Cody for … actually I’m not sure. I guess because he wasn’t here the past few weeks? Brodie, you already beat him! You took his belt! This is just kind of a weird way to continue a feud.

Birthday boy Matt Hardy comes to the ring next, flanked by Private Party. Thinking out loud, he tries to determine who could have attacked him from behind last week, and there’s no lack of suspects. Could it be … Satan?!? (If you’re old enough to remember Church Lady, respect.) Hardy zeroes in on Chris Jericho, who clearly won’t stand for getting run down when he can bring out the entire Inner Circle — including the returning Sammy Guevara — and get in some insults. Hardy wants to fight despite being hurt, but Isiah Kassidy has a better idea, challenging the Demo God to a singles match next week on Dynamite. If you had Kassidy in your “which young AEW talent will get the rub from a program with Jericho next” pool, congrats, you just became a little bit richer.

Tully Blanchard has some new ideas as consultant to FTR. For starters, he says the champs are only doing 20-minute matches from here on out, and any team that can’t win in 20 minutes gets a loss on their record. Also, they get to pick their opponents. SCU will wrestle them next week, but after that, there’s a question. FTR dismisses the idea of the No. 1 ranked team, Best Friends, getting their own “brush with greatness,” but Trent and Chuck come out and are ready to throw down right now. Just when it looks like the champs will accept, the top guys decide it wouldn’t be fair to take on Best Friends when they are still banged up from their Parking Lot Fight last week. Very considerate, those FTR gentlemen.

Match 4 – Ivelisse and Diamante vs. Thunder Rosa and Hikaru Shida

Shida bailed out Rosa a week ago when she was being assaulted by the ladies they are taking on tonight, so the bond between the two champions looks like one of mutual respect. Of course, this being professional wrestling, that could go right out the window to quickly put them back at odds. Which will it be? Looks like it’s on the up and up, with Rosa and Shida working together to pick up a victory.

Jericho has some backstage interview time, addressing the challenge from Kassidy. MJF comes by to pay some insincere lip service to Jericho, and it turns into full-on mock respect just like before. Except this time, both men question why the other called them a loser at the end of that previous segment, saying they found out by watching clips on social media. Thinking quickly, MJF claims he actually meant that insult for the limo driver, while Jericho says his was intended for Schiavone. For now, at least, they part ways on good terms.

Call it a hunch, but I don’t think the big moment Kingston has been working toward for nearly two decades is going to happen in a 15-minute bout on free TV. It sure would be interesting to be wrong, though. Kingston is in black and yellow as a tribute to Toshiaki Kawada, which is also cool. It’s as hard-hitting an encounter as you might suspect, but despite some hope on Twitter that they would fight to a time limit draw, Moxley ends up putting Kingston to sleep. He never taps out, so maybe these men will meet again.

Kingston’s family members, the Lucha Bros., immediately rush out to pick the carcass of the champ, but both Will Hobbs and Darby Allin come to fight on Moxley’s side. Ricky Starks also makes an appearance, spearing Allin, and all of a sudden we’ve got several subplots overlapping, just the way you like it. Wonder Woman is up next on TNT, so we’ve got to run. See you in seven!

It would have been really nice if Eddie Kingston got a bit more time for his big title shot, but the match was fine for what it was. The rest of the show offered its share of entertainment but felt a little too heavy on setup. We’ll see if the next few episodes deliver on their promise because they look pretty loaded.