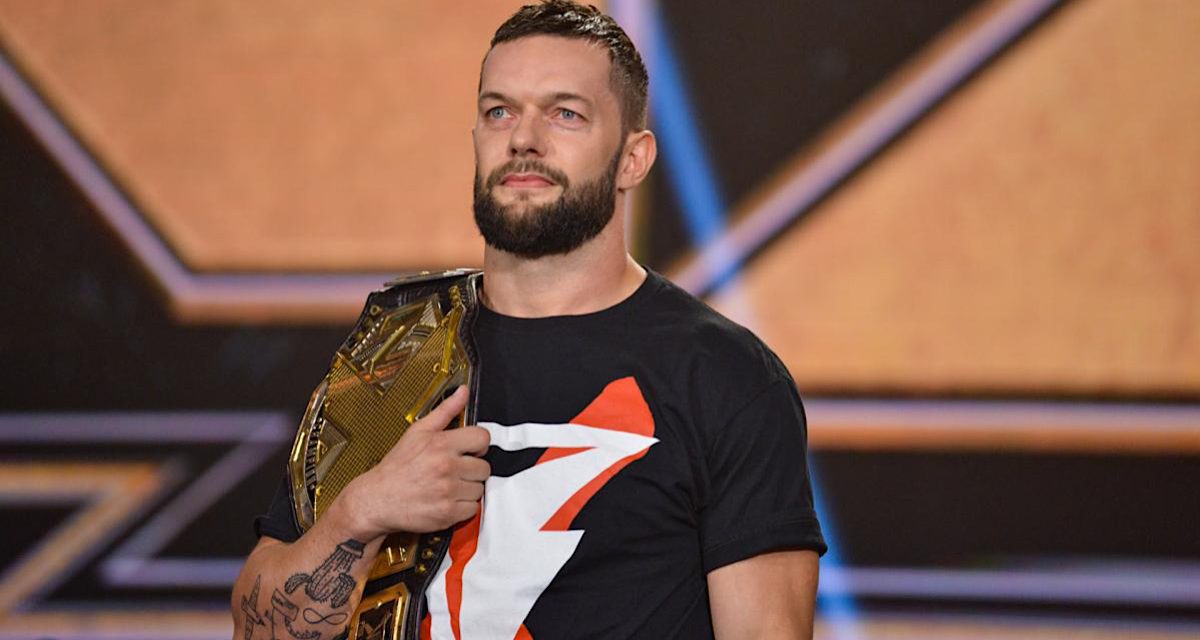 Following the impromptu announcement of NXT Takeover on Sunday, October 4, the yellow brand acted quickly to assemble its special card. Consequently, tonight’s episode featured three different number-one contenders matches , each with an added wacky stipulation. That notion worked for the better regarding the night’s main event, which decided the next opponent for Finn Balor’s NXT Championship. Five of NXT’s best battled in the first ever NXT Gauntlet Eliminator Match, proving that the promotion’s strong point is multi-man matches apparently.

Candice LeRae and Rhea Ripley get their own respective entrances before the bell; footage shows LeRae attacking and injuring Tegan Nox backstage. The remainder of the competition fill the mid-to-undercard role, including some new faces like Brandi Lauren. The no-namers are quickly thrown out by Ripley and Raquel Gonzalez who are battling for dominance throughout. Before the commercial, Kacey Catanzaro saves herself from elimination by hand-standing back to safety. She again avoids failure by clinging to the barricade, reaching for partner Kayden Carter who shortly gets eliminated by Gonzalez. Carter helps Catanzaro by carrying her back into the ring. Creative elimination-saves aren’t creative when they’ve been done before, by the way. 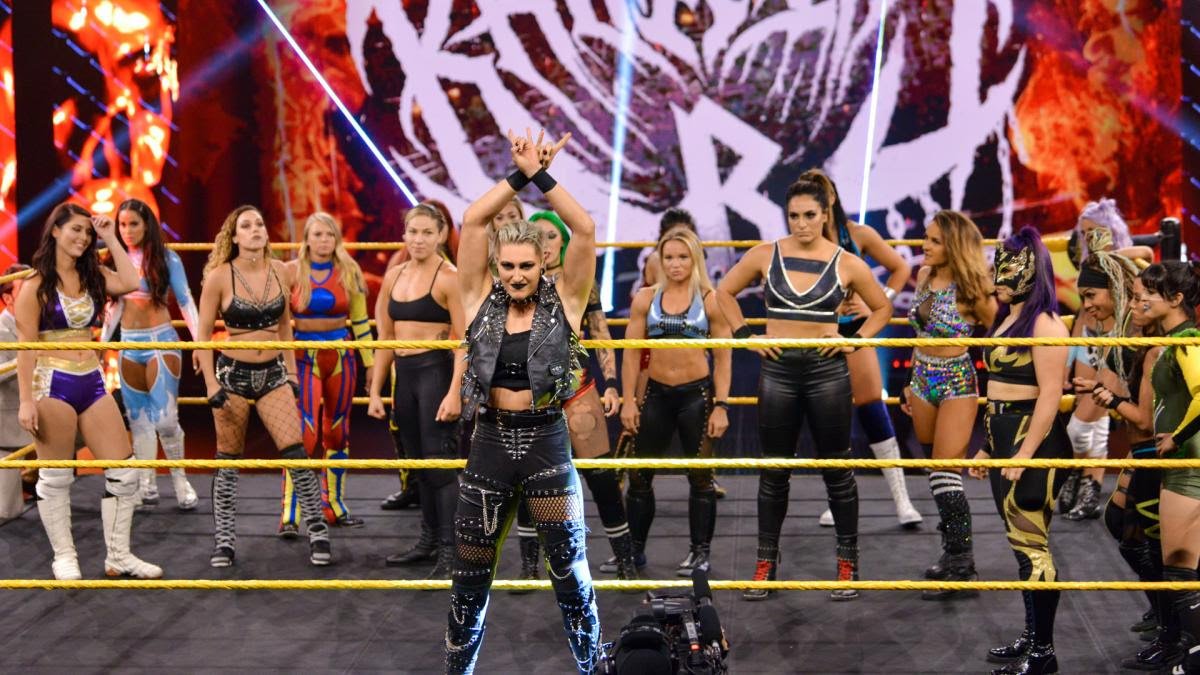 Ripley and Gonzalez finally throw hands until they’re simultaneously and flatly eliminated. They continue brawling on the outside, meaning Ripley’s stuck in another mid-card feud. Eventually it simmers down to Catanzaro, LeRae, Shotzi Blackheart, and Dakota Kai. The heels work together to eliminate the former, but Kai gets thrown out by Blackheart. LeRae’s then thrown into the post and slides down the steps; Blackheart tries to boot her off, but LeRae reverses the momentum, throwing her opponent to the floor. Lerae wins this lifeless showcase and becomes the new number-one contender for Io Shirai’s championship.

Fandango, current NXT Tag Team Champion, dons a Sherlock Holmes outfit with a pipe in his mouth. He’s going over his masterful plan to determine the new number-one contendership to Breezango’s titles. General Manager WIlliam Regal agrees, albeit he just wants out.

The fight spills outside and Atlas stomps away at Ciampa. The aggressor attempts to slingshot Ciampa into the exposed ring structure, reminiscent of what injured Atlas weeks ago. “Psycho Killer” escapes and delivers a closeline, but Atlas returns with quick offense — too much offense actually, hitting Moonsaults and Blockbusters on a mainstay like Ciampa. The latter eventually reverses the opponent’s finisher, hits the Willow’s Bell, but doesn’t cover. He talks some smack and delivers the Fairy Tail Ending for the pinfall victory. This didn’t really help anyone.

A video package showcases the five competitors wrestling in tonight’s main event to determine the new number-one contender for the NXT Championship.

Who booked this? The answer is Fandango. The madlad ballroom dancer thought that mix-matching the tag division would properly settle a new number-one contendership. Some fast-paced one-upmanship cycles through the participants before break. Aicher and Mendoza work down Burch until Strong makes the blind, hot tag. Eventually after some scuffling, Burch gets the pinfall victory on Mendoza. This was more a fatal four-way with illicit alliances than a tag-team match. Nevertheless, Burch along with Oney Lorcan will challenge The Undisputed ERA to truly determine the new number-one contender.

Austin Theory is interviewed backstage before Johnny Gargano interrupts. The latter hopes that Theory softens Damian Priest up before their championship match. 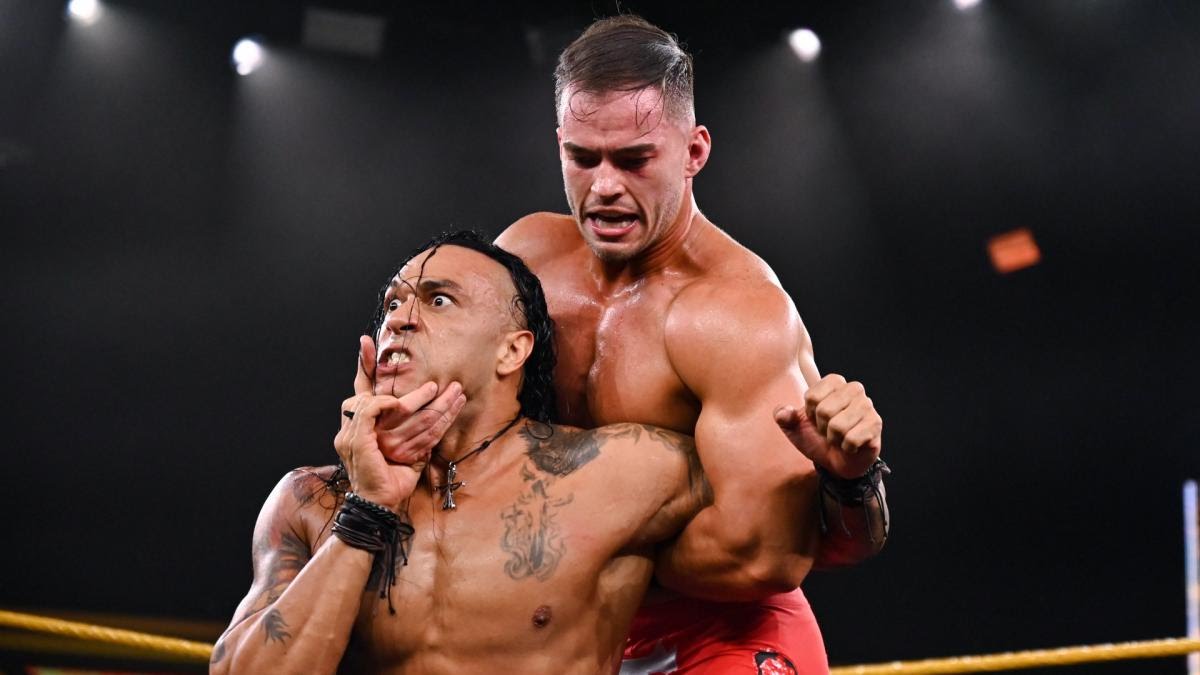 These two look like absolute superstars! Even trading flashy reversals, their moves appear stiff and efficient. Theory takes control but shortly runs into a Flatliner. Priest attempts a springboard maneuver, however Theory pushes him to the floor before commercial. The 23-year-old Theory pulls off his always-impressive rolling dropkick for a two-count, and Priest fires back with the Falcon Arrow. On the outside, the latter connects with a Cyclone Kick and throws Theory into the apron. Priest wins with The Reckoning, but this was definitely Theory’s best showing amidst his short NXT career.

During his post-match celebration, Priest is attacked by Johnny Gargano. They’ll battle over the North American Championship at the next Takeover — for reasons unknown.

A seriously-ominous, seriously-cool video package hints at a possible debut or return. A mysterious figure throws an object at a title case, extracting the NXT Championship. Then, the date 10.04.20 flashes on-screen. The October 4th Warning is coming to NXT!

The brick patterning on Holland’s gear is very apropos considering this man’s built like a brick–house. He tosses around his opponent like it’s nothing until continuously headbutting his opponent. Holland delivers his Northern Grit finisher for the pinfall victory. Finally, a squash match plays out like an actual squash match.

Throwing back to their awesome New Japan Pro Wrestling matches, Kyle O’Reilly and Kushida start the gauntlet. They legit have an actual jiu-jitsu sparring contest, rolling through fundamental positions and submissions. More of this, please! They smoothly transition into more traditional grappling sequences and strong-style striking before Bronson Reed enters the match. He, of course, runs through his opponents. O’Reilly shows off his amazing technical prowess, countering Reed’s stomp into a kneebar, but the bigger man regains control. Kushida foils his plans atop the turnbuckle, simultaneously taking out O’Reilly which allows The Velveteen Dream to attack the former from behind — Dream being Kushida’s current rival. Reed hits the top-rope splash onto Kushida to eliminate the helpless Japanese. 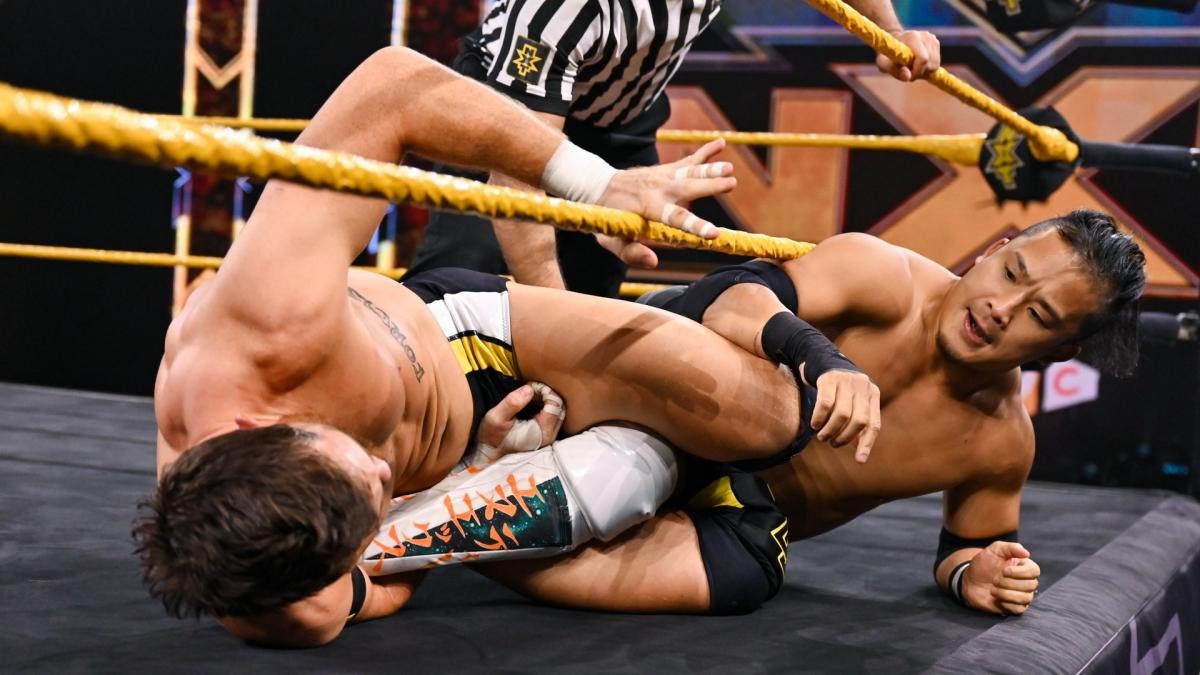 Next, Timothy Thatcher attempts to enter the ring before Reed takes him out. The cameras  focus on Thatcher’s befuddled face before commercial. Way to make an impact? The three competitors comically rotate through take-the-backs before Reed finally delivers a suplex. Cameron Grimes makes the last entrance and takes control. The action breaks out, but every consecutive move appears calculated and effective. Also, NXT has a glaring problem with their piped-in crowd noises; it’s unnatural and there have been constant ‘boos’ throughout this match, for whatever reason. Eventually, Reed dives onto his three opponents before commercial. 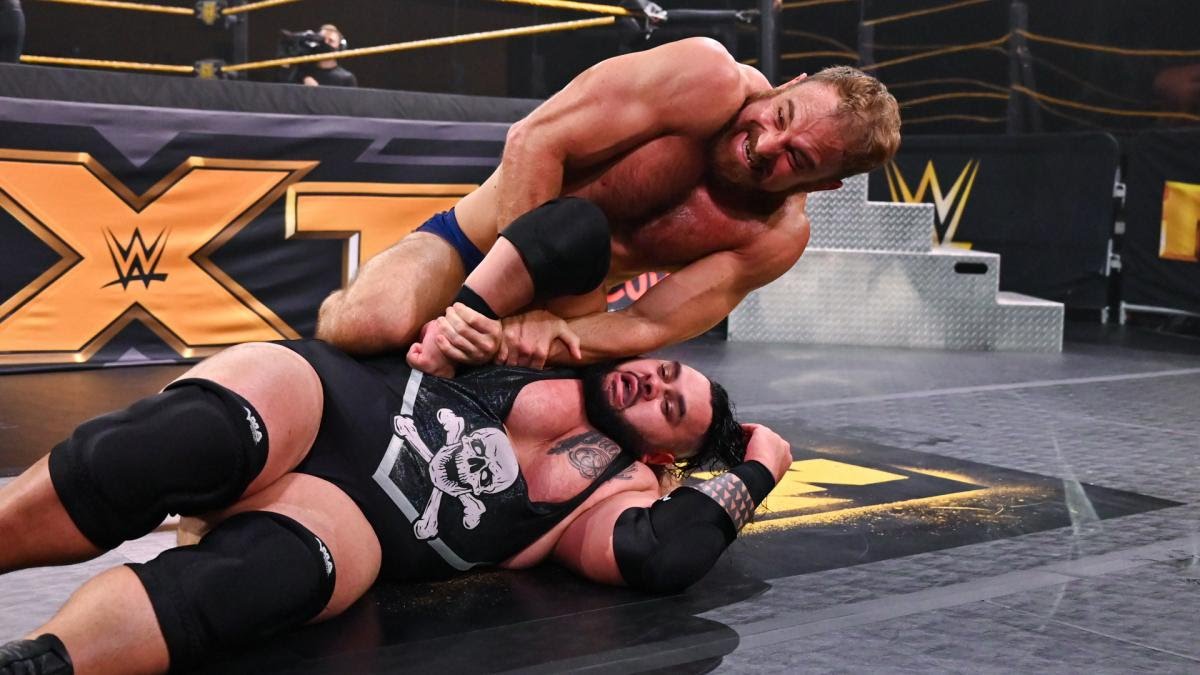 Reed misses a splash, and O’Reilly dives onto him with a flying knee for the pinfall. Reed is eliminated as Thatcher and O’Reilly trade strikes. The lanky Thatcher applies a sleeper on O’Reilly, O’Reilly catches an ankle lock on Grimes. Undisputed ERA’s O’Reilly rolls through pinfall attempts until he eliminates Thatcher before getting caught with Grimes’ stomp; O’Reilly gets his foot onto the bottom rope. In an ear-opening moment, Grimes tells his opponent, “You’re nothing like Adam (Cole)! He was the man of the group!” O’Reilly cinches a knee-bar and immediately gets the submission victory.

Kyle O’Reilly vs Finn Balor for the NXT Championship takes place at the next Takeover! Again, The Undisputed ERA civil war’s going to be awesome! And finally, O’Reilly is getting the main-event, singles spotlight he’s deserved for so long. 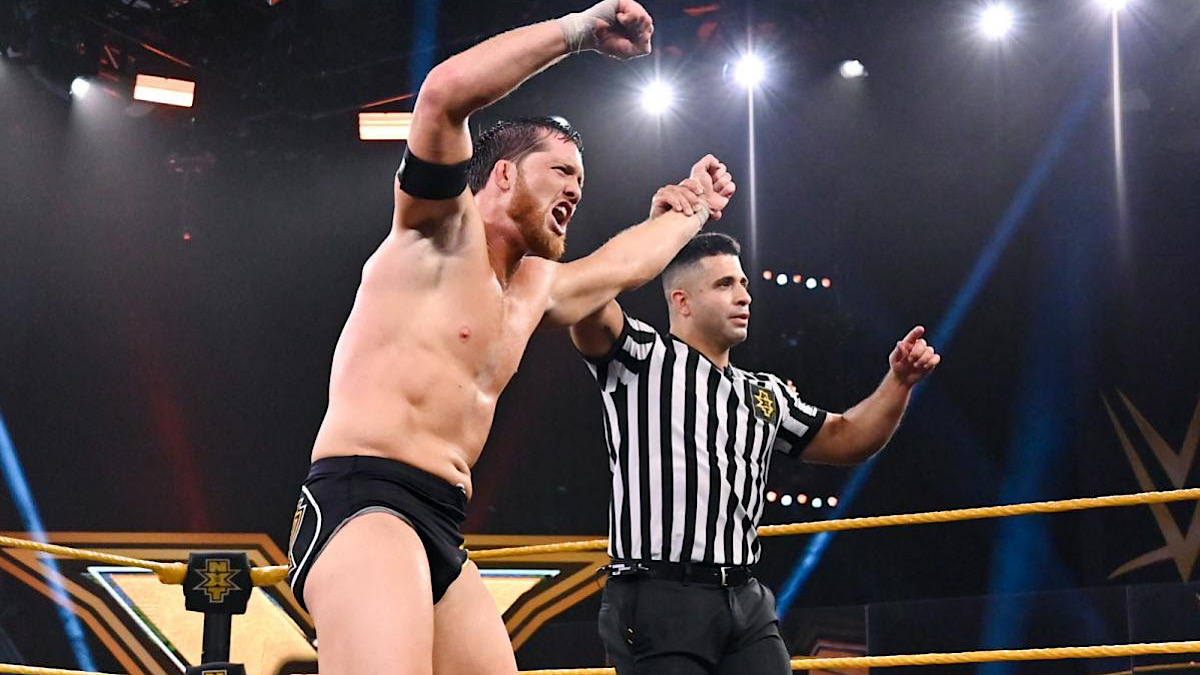 The main-event scene is looking spicy again; The Undisputed ERA boys have really carried this brand. Also, I thought that the main event was great, along with Priest vs Theory. Big upgrade for NXT tonight!