NXT: The Prince reclaims his throne at Super Tuesday II 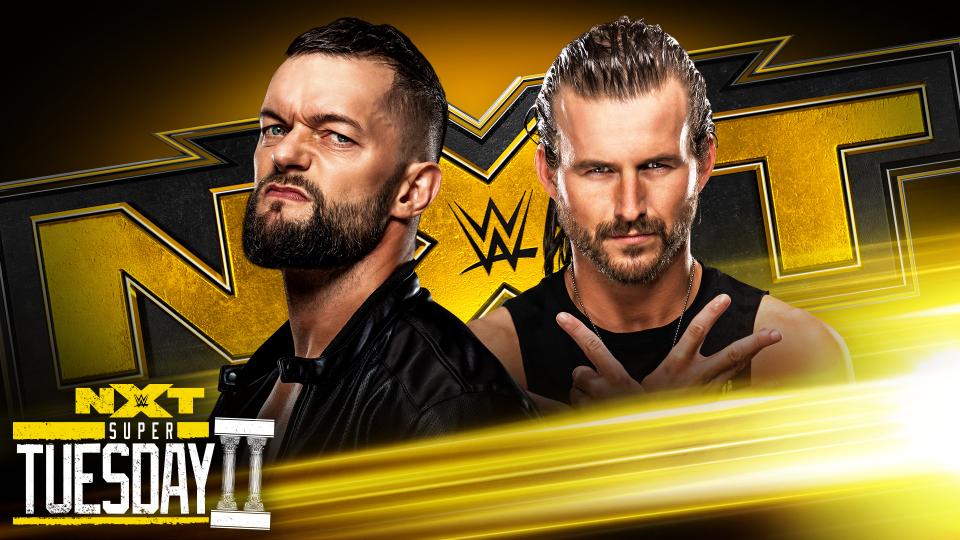 After a four-way 60-minute Iron Match, NXT’s inaugural Super Tuesday failed to crown a new NXT Champion when Finn Balor and Adam Cole tied at two falls a piece. One week later at Super Tuesday II, a solid one-on-one bout opened the show and got the job done. Hopefully the royal victor can spike some excitement into the yellow brand.

The night’s main-event put rivals Rhea Ripley and Mercedes Martinez inside a steel cage to settle their disputes. The anticipated women’s match was built as ‘The Battle of the Badasses’, and after their ferocious showing, the tagline can’t be refuted. The remainder of Super Tuesday II was somewhat underwhelming, but the two highlighted bouts were definitely super.

Following an extensive period of smooth chain-wrestling, the Undisputed ERA’s Adam Cole takes control with an Ushigoroshi. Balor fights back during picture-in-picture and keeps heavy pressure on Cole with some hard-hitting strikes. Cole eventually makes a babyface comeback with the Full Sail audience completely behind him. He takes a Slingblade from Balor but counters the next attack with a Shining Wizard. Cole attempts the Last Shot and misses, allowing Balor to take control and throw his opponent ringside. Balor attempts a running dropkick into the barricade but instead runs into a Superkick before commercial. 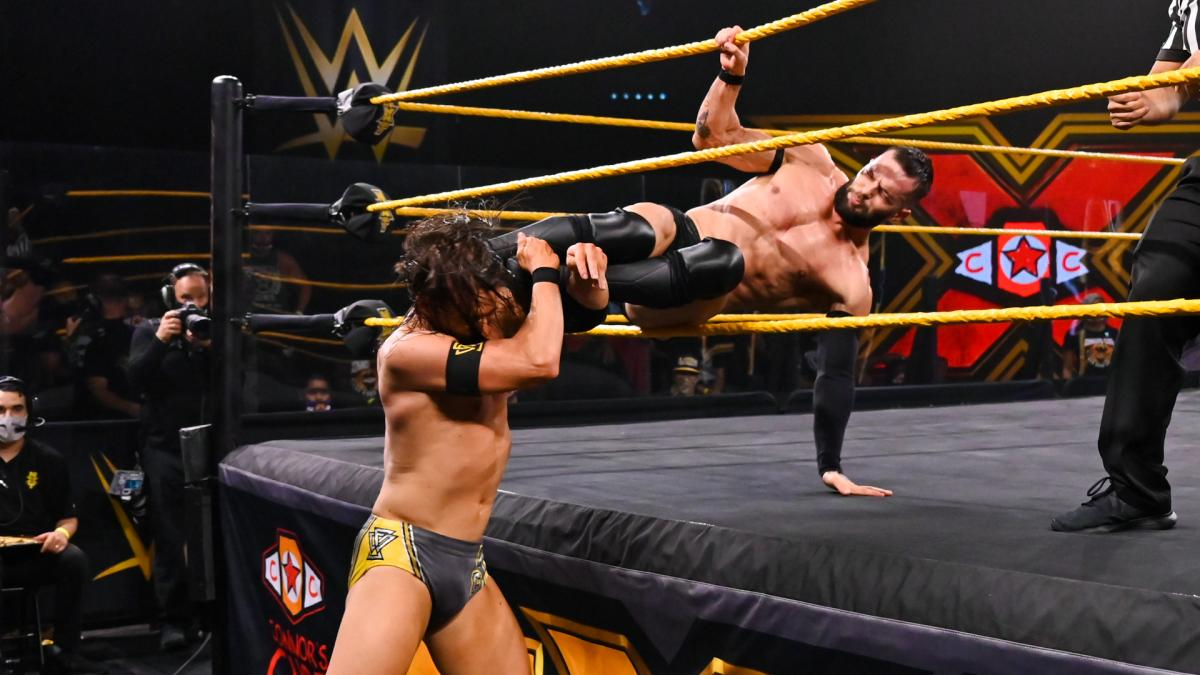 Back from the break, Balor misses the Coup De Grace injuring his knee, allowing Cole to cinch the Figure Four. Balor grabs the ropes, delivers another Slingblade, and hits the Coup De Grace. Cole kicks out a two, and it’s apparently the first time anyone’s kicked out of that maneuver; commentary runs wild. Balor escapes a second Figure Four and immediately runs into a Superkick which is followed by the Last Shot; Balor kicks out. The Irishman delivers an inverse 1916 and heads to the top, stopped by Cole. They battle atop the turnbuckle until Balor hits an Avalanche DDT for the pinfall victory.

“The Prince” has reclaimed his throne, and the NXT Championship has never looked better around the waist of Balor. The new champion poses with the giant “X” structure, signalling a new era for the yellow brand. Balor proved his recent statement, “I’m not a cornerstone, I’m the centerpiece.”

Rhea Ripley hypes tonight’s steel-cage main-event between herself and Mercedes Martinez dubbed ‘The Battle of the Badasses’. 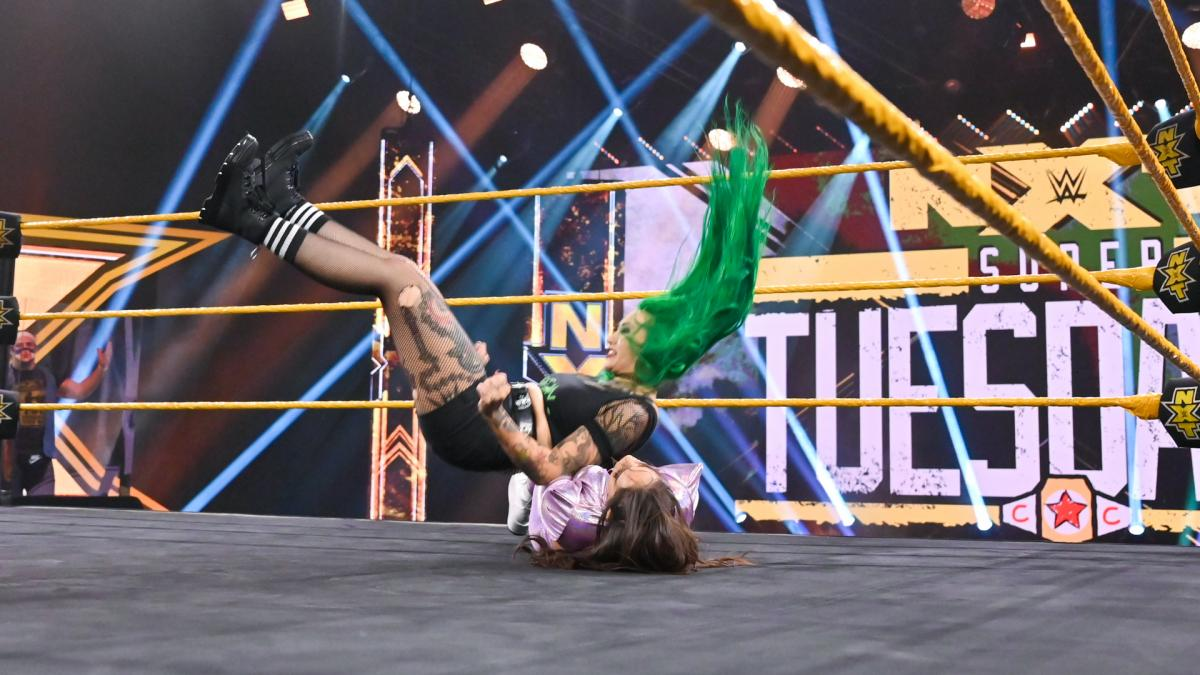 Robert Stone looks to destroy Shotzi Blackheart’s tank, except she’s there to stop him. The Robert Stone Brand’s Aliyah attacks Blackheart which inadvertently interrupts Io Shirai’s photoshoot. Shirai and Blackheart take out both Aliyah and Stone inside the ring, and the latter makes a challenge to the champion Shirai. For a brand that prides itself on a deep women’s roster, Shirai can’t summon believable challengers.

Inside the Gargano House, Johnny Gargano and Candice LeRae invite Tegan Nox to discuss the girls’ broken friendship. It cuts before commercial — not like the conversation would be compelling anyhow.

A vignette shows Timothy Thatcher teaching another edition of Thatch-as-Thatch-Can. He conducts a film study on rival Damian Priest.

Finally another wrestling match breaks out. The Dream mocks his opponent before Adonis offers a rebuttal, angering the former. Adonis makes a comeback on Dream, almost scoring an upset victory. He attempts a Superkick which inadvertently targets the ref, allowing Dream to hit an eye-poke. Dream delivers the Dream Valley Driver for the victory. Adonis had never performed on NXT television, at least in recent memory, so him having the majority control on someone like Dream was very odd.

Dream grabs the mic for a promo before Kushida attacks him from behind. Kushida pulls Dream’s shoulder into the post and cinches an armbar as refs attempt to separate them. This is actually Kushida’s first actual rivalry from over a year competing in NXT. Look how far the Junior Ace has come…

The new NXT Tag Team Champions Breezango have a sit-down interview covering their recent accomplishment. They take shots at Imperium who will challenge for the titles next week.

Back inside the Gargano House, Johnny Gargano admits that this segment is weird and awkward and heads upstairs to finish his dinner. The two women argue over pro wrestling morales.

The returning Austin Theory makes his entrance with superhero-like graphics behind him; he really does have a superhero physique. Commentary reiterates that Theory competed at Wrestlemania XXXVI at just 22 years old. Reed overpowers his opponent in the opening minutes and dives onto him ringside before commercial. Reed strikes down Theory, and the latter takes an overly comical flip-bump for a Bionic Elbow. Theory attempts to suplex Reed, but he gives under the weight. He follows with a Rolling Blockbuster, attempts his finisher, but crumbles under the weight again. Reed gains the pinfall victory with a top-rope splash. Theory loses his return match because he couldn’t handle Reed’s weight — Theory the former bodybuilding champion. 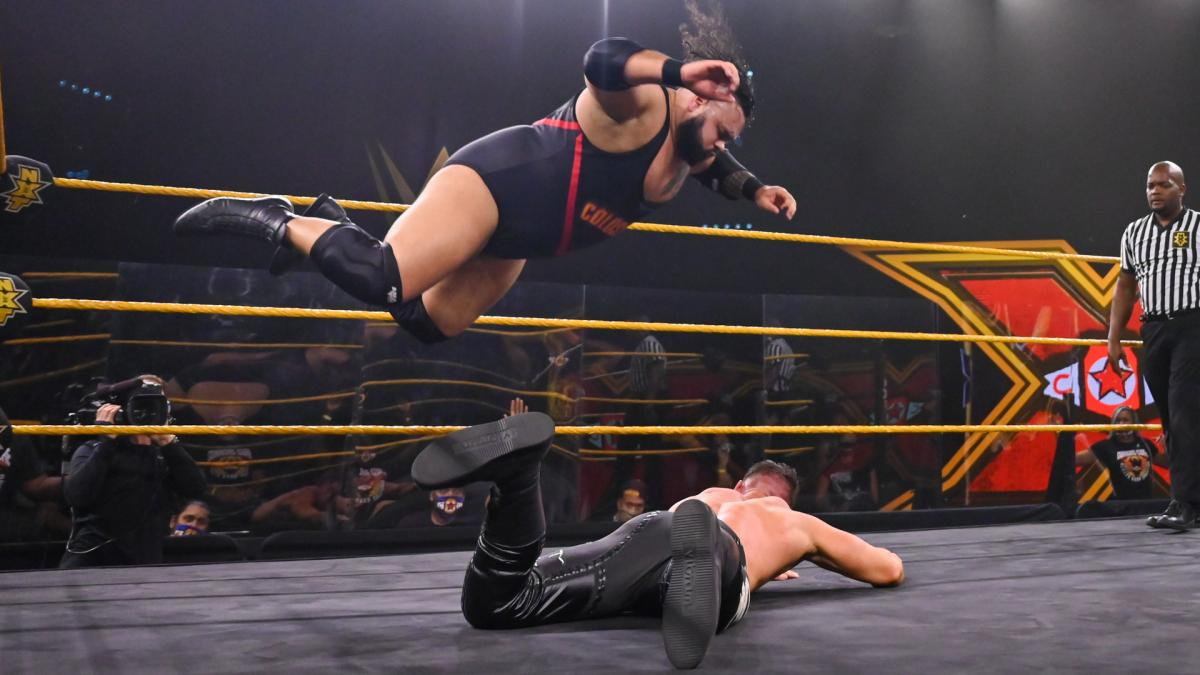 Dain gets the early control, but Fish discretely interferes before commercial. The combination of Strong’s solid framework and Dain’s explosiveness makes for a great clash. Fish pulls his partner out of the danger zone, distracting the big man before Strong hits a jumping knee for the victory.

The two Undisputed Era members continue to beat down Dain until Drake Maverick runs in with a steel pipe. Strong and Fish gain the advantage, but Dain threatens to attack with the pipe. Maverick extends a hand, but once again Dain takes out Maverick.

For the third time, the cameras roll into the Gargano House. Candice LeRae throws a tossed salad at Tegan Nox, and the latter throws back her drink. Johnny Gargano lectures Nox for being a bad friend, but the latter pours a bowl of spaghetti onto him. LeRae tries to throw her shoe at Nox but inadvertently hits her TV screen. Gargano sulks over his broken TV with spaghetti over his head. Come on now, NXT, come on.

During her entrance, Martinez throws a kendo stick and multiple chairs into the ring before Ripley attacks from behind. Ripley brings a table into the ring and shuts the cage door, but Martinez takes advantage. The Aussie comes back with a boot and maintains the pressure. She attempts the Riptide but gets countered by a Fisherman Suplex by Martinez, who then slams her opponent onto a chair before commercial. Ripley throws a chair at Martinez, perched on the top rope, and follows with a dropkick. The former delivers a Superplex for a two-count, Martinez hits a Spinebuster, and both women are down.

Ripley cinches her signature Cloverleaf, but her opponent escapes with a kendo stick shot. On the outside, Robert Stone starts climbing the cage, and Ripley attempts a huge Superplex before Martinez halts it. The latter hits an Avalanche Neckbreaker for a two-count. As Stone stays lifeless atop the cage, Martinez sets up the table. Ripley is able to deliver a top-rope Riptide through the table for the victory. After a truly awful summer for Ripley, this win reinstated some momentum. Also, Stone stayed atop that cage throughout the end of the show. Some say he’s still up there. 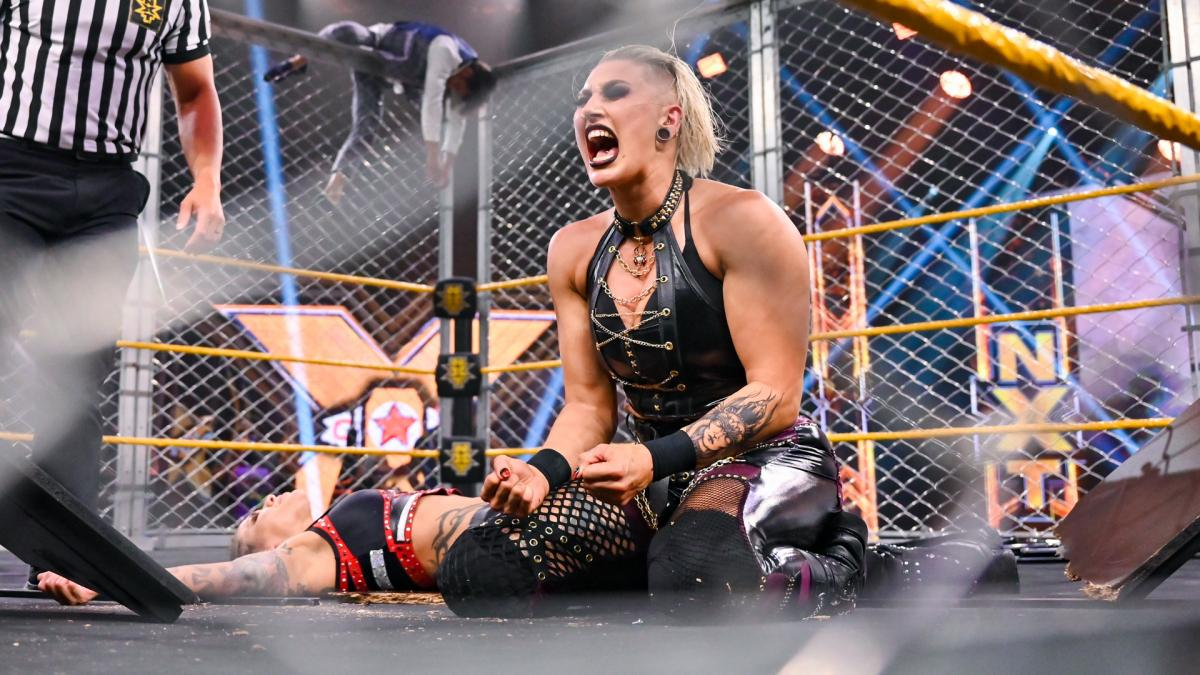 The two headlining bouts were worth checking out, but the remainder of this show was just not. NXT shows now run on this structure of high, low, high. And the lows in the middle just drag on.