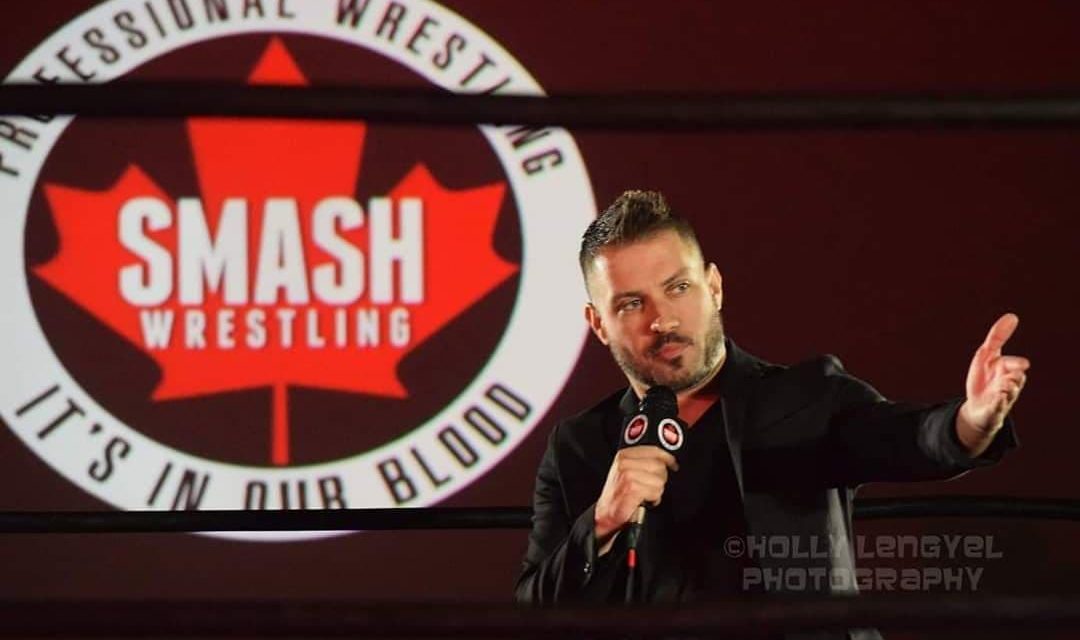 Scott Hunter has called nearly 1,000 matches in his career. But when he first stepped into the commentary booth, he just wanted to call one.

“One match turned into eight,” Hunter said of his tryout for Toronto’s Smash Wrestling.

Since that night – when a tryout turned into a full night of commentary and, ultimately, a job – he has kept a ledger, chronicling every match he has called over his nearly eight year career.

But six months prior to joining the company, Hunter didn’t even know independent wrestling existed.

“It never occurred to me – where do these guys get started?” said Hunter, a wrestling fan since he was 4 years old. 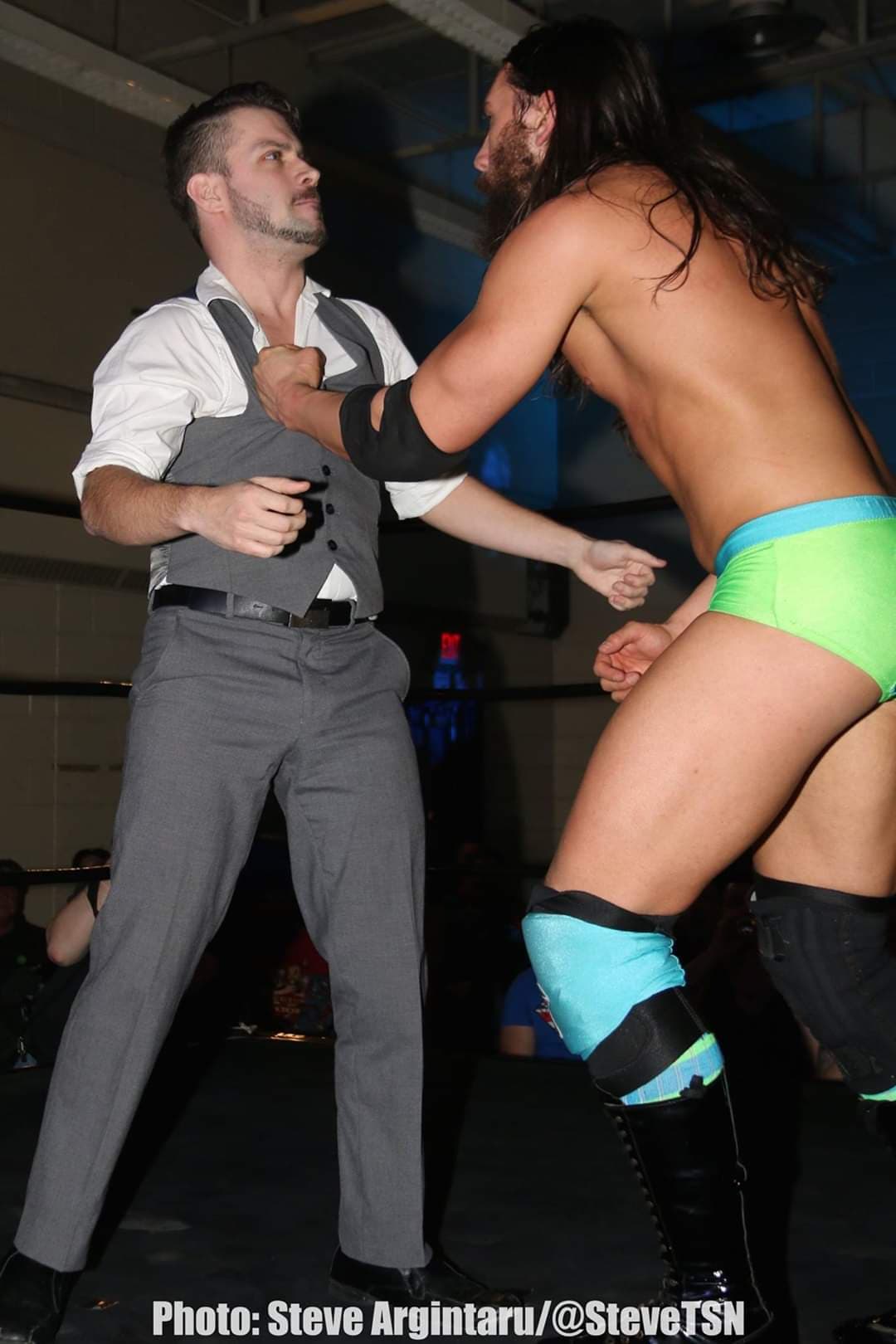 Smash Wrestling Commentator Scott Hunter has taken on additional duties since he joined the company. He conducts interviews and ring announces as needed, among other responsibilities. | Photo by Steve Argintaru

His first wrestling memory is an episode of WWF Superstars in which Jake “The Snake” Roberts’ snake bit into “Macho Man” Randy Savage’s bicep. From that moment, Hunter sunk his teeth into the industry.

He studied journalism for four years at Wilfrid Laurier University’s Branford, Ontario, campus followed by one year at Conestoga College in nearby Kitchener. That background, he said, helped him find a “level of comfortably being on camera.”

Like many others, Hunter looked to Jim Ross an influence, as well as Toronto Blue Jays announcer Jerry Howarth. Those two showed him that commentary was about more than describing the action – it told a story.

Since becoming a commentator himself, Hunter has reached out to Jim Ross twice, asking for advice. The first time, Hunter was about two years into his Smash Wrestling tenure and Ross was in Toronto for a live show. Ross’ response? “Don’t do it.”

“He talked about all the time you’d be on the road, away from family,” Hunter said, “and I think part of it was it takes a special breed of person to be in this industry. It weeds a lot of people out pretty quickly.”

A couple years later, Hunter connected with Ross again at the Cauliflower Alley Club reunion in Las Vegas. Hunter brought up their first meeting, and again asked for advice. Ross’ response? “Don’t do it, but I’ll see you again in four years.”

“I didn’t know the people, but I knew wrestling,” Hunter said.

During his first couple Smash shows, his broadcast partner Dustin Perie took the lead, while Hunter added analysis. He slowly transitioned to a “play-by-play” role. 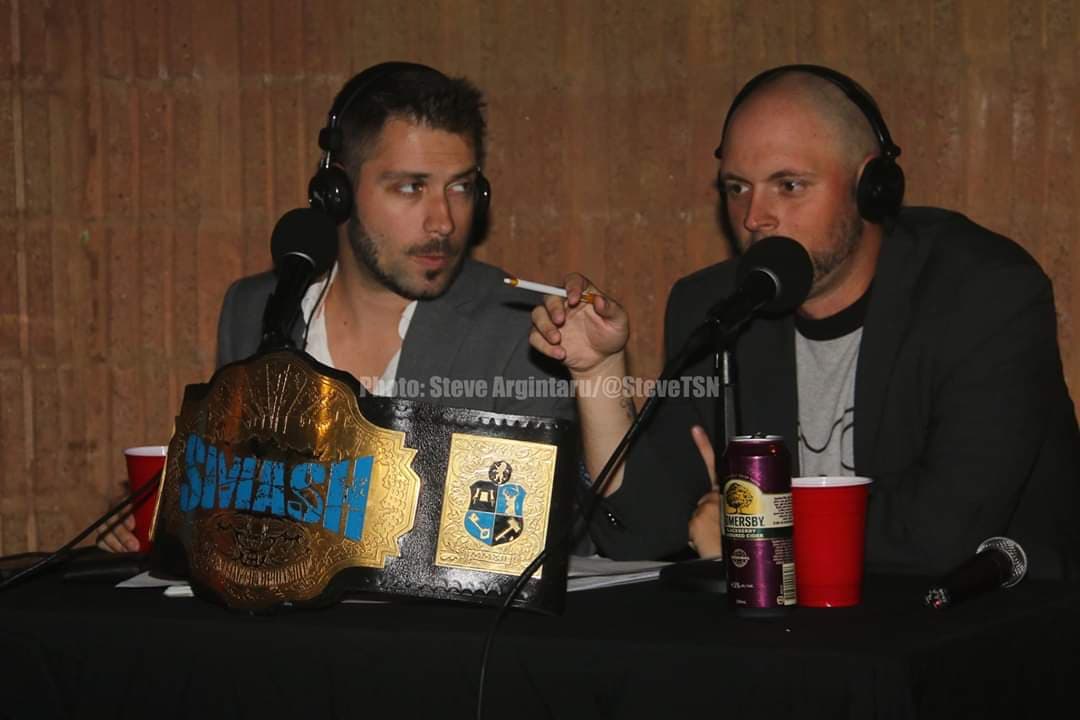 Perie said at the time of Hunter’s tryout, he had been a one-man commentary team, along with conducting backstage interviews and ring announcing. He also was working with other companies and had different broadcast partners at every show.

“Scott was the first colour guy I worked with that showed up with notes,” Perie said. “He did research. He knew who everyone was. He was aware of what was going on at Smash Wrestling. That sounds obvious, and every announcer should do that, but unfortunately, in my experience, it’s rare.”

“Fast forward to today, Scott has become the lead and occasionally I’m his colour guy,” Perie said. “And while the roles are reversed compared to how it began, with many twists and turns along the way, he’s stepped into that role well and we still work very well together.”

Hunter said his preparation for commentary involves sitting down with the wrestlers about an hour before the show to hear their version of the story that will be told in a match.

“That’s a pivotal point,” he said. “They’re the ones in the ring telling the story. My job is essentially to narrate the story they’re telling.”

One of his favorite matches to call was the Last Man Standing bout between Tarik and Sebastian Suave at Super Showdown 7.

“It wasn’t so much the match, but the story they told,” Hunter said, “the emotions that came out.”

Tarik, according to Hunter, was “destined to be a main even player” in Smash, and that match was one of the last before Tarik won the Smash championship in 2018.

About six to eight months into his time with Smash, Hunter wanted to take on a larger role. So he took it upon himself to conduct backstage interviews and ring announce as needed. Now, he  covers “anything that doesn’t involve being in the ring.”

Smash will ‘always’ be home

While Hunter said there isn’t one piece of advice that he has received that has stuck with him, he has taken “little tidbits” from people he has called matches with, noting the time he spent alongside Impact Wrestling’s Josh Mathews.

“I was in awe of how well he was able to promote as he commentated and he’s promoting the rest of the show, what’s coming up next,” Hunter said.

That’s something Hunter said he never considered from an independent wrestling perspective.

Hunter also was on commentary for multiple shows that Smash co-branded and promoted over SummerSlam weekend in Toronto in 2019. It wasn’t until after the weekend ended that he reflected on that success.

“My biggest takeaway is wrestling in fucking awesome… Doing so much in such a tight span, I was so in the moment, I wasn’t able to appreciate all that I was doing,” he said.

But after breaking in to the business with the goal of calling only a single match, a switch flipped and changed the game.

“I think my name’s gotten out there lot more than I ever expected it would be,” he said, “My voice has traveled to countries I will never go to, and I think that’s pretty cool.”

And while he said he would love to be on commentary for any promotion, Smash, he said, “is always going to be home.”