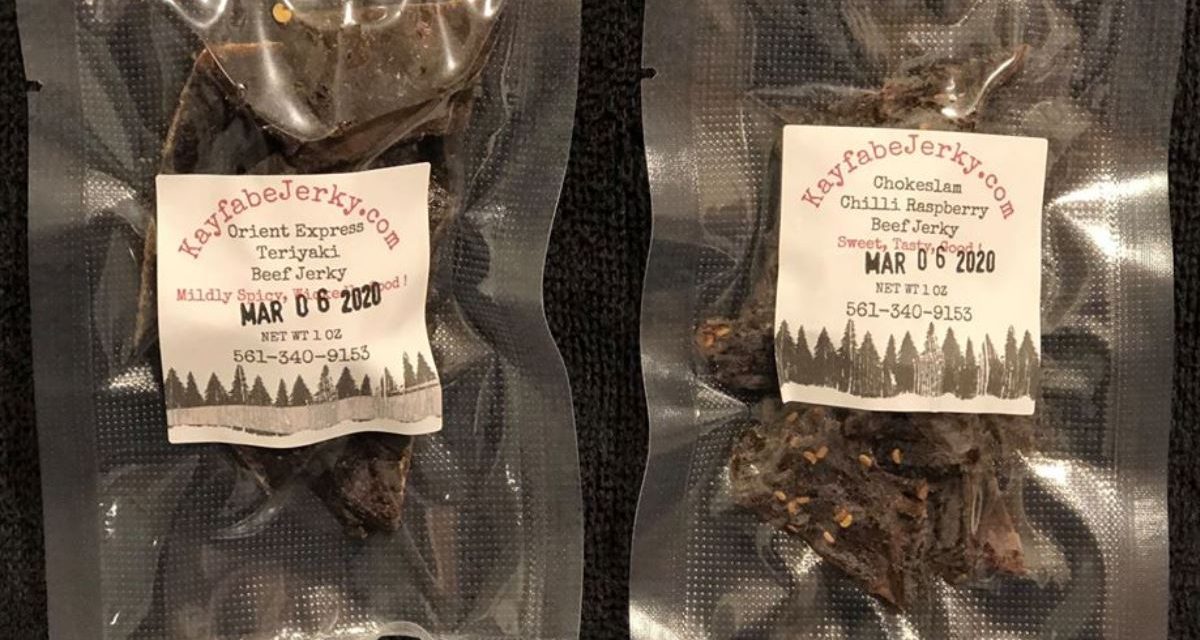 With a new brand of beef jerky, a Canadian-born former wrestler and referee is combining three things he’s passionate about ­— food, running his own business and professional wrestling.

The name of Dave Linton Rector’s Kayfabe Jerky gives a wink and nod to the pro wrestling he grew up watching on TV and in live settings, as well as the business in which he worked for several years.

“Pretty much every flavor I do is wrestling related. I try to do two flavors every week to two weeks. If somebody wants a custom package or a custom flavor, I can do that, as well” he said. 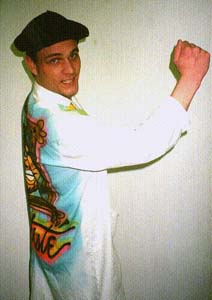 “I was born in Oakville, Ontario, and grew up in Burlington. My buddy, Jamie Asher, and I would go with our fathers to Maple Leaf Gardens in Toronto. Hulk Hogan would headline all those shows we would go to and I was a Hulkamaniac growing up. Jamie and I would stay up late and watch Saturday Night’s Main Event and stuff like that. In Canada, WCW was never that big, so I wasn’t really a WCW or an AWA guy.”

From there, he and Asher were trained to wrestle by “Sweet” Steve Hart, who Rector said is not part of the world-famous Hart family wrestling dynasty.

“One day, we decided to look into a wrestling school. I don’t know how he did it, but Jamie got in touch with Steve, who had graduated from a wrestling school Jason Sterling, who’s The Missing Link’s son, had in Hamilton. Steve was going to start his own thing and we were pretty much his first two students,” Rector explained. “I started training in 1994 and had my first match in September of ’95. We started out with RWA, Renegade Wrestling Alliance, which was Steve’s promotion. We pretty much did shows for him for free to get experience the first few years, then we kind of broke off and started traveling to the Northeast U.S. — Michigan, Indiana, New York and Pennsylvania — to do shows.”

In 1999, Rector got a tryout with WCW in which he and The Custom Made Man (Mark Miller) tagged against two fellow Canadian wrestlers­ — his lifelong friend Asher, working as “Sexy Baby” Jamie Jackson, and Stunning Sean (Sean Hall).

“They gave us a dark match before Nitro in Cleveland. That weekend was crazy, but it was a blast. That Saturday we were in Pittsburgh, in Toronto on Sunday and in Cleveland on Monday. Shark Boy had his dark match the same night as us.”

His gimmick then was L’Artiste, a French painter hailing from Paris, Ontario.

“Chris Kanyon was in Toronto doing a movie, which was the Jesse ‘The Body’ Ventura movie. He had me and Jamie in the movie and we became friends with him during that time. He ended up getting us the tryout with WCW in June of 1999 and we got a contract offer. Because we were Canadian, to see how the process would work, they tested it out on me. I filled out all the paperwork and all that stuff. As it turns out, they took back the offer because it apparently would’ve been too much paperwork for the WCW lawyers and stuff like that. That was kind of a kick in the balls. To me, it was like giving candy to a baby and then taking it back.”

Rector later returned to the Canadian indies as a wrestler and wearing the referee’s stripes for such independent promotions as Toronto’s Blood, Sweat and Ears (BSE).

“I never truly realized the value of a good referee till I became one,” he said. “I used my experiences as a wrestler and transferred that knowledge to being a referee. I still wrestled, just not as much. After I saw the value in a good referee, I was getting more referee bookings than wrestling bookings.”

Although he’s been out of the ring for a while now, Rector watches today’s plentiful wrestling programming not only to stay abreast of the current product, but also to see some of his friends and former colleagues work.

“I really don’t have many friends or associates outside of the wrestling business,” he said. 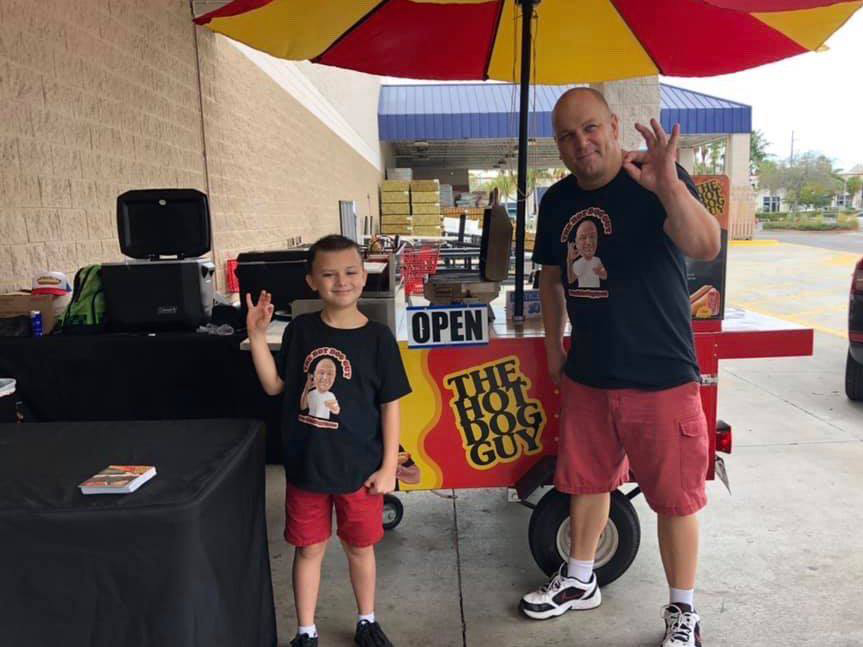 Josh and Dave at the hot dog stand.

Getting into the jerky trade wasn’t Rector’s first time going toe-to-toe with the food industry.

“I’ve always had an entrepreneurial kind of mind, buying and selling things,” he said. “I had my own hot dog cart that started in 2018. It was called The Hot Dog Guy and was painted red, yellow and black with my picture on the side of it.”

Those colors were, of course, a tribute the Hulkster, whose memorabilia was the foundation of another wrestling-related entrepreneurial venture for Rector, who now lives in Florida.

“At one time, I collected a lot of Hogan stuff. Not only did I accumulate a really nice collection for myself, I would also buy and sell stuff. At various points, I had tons of WWF turnbuckles and things like Hogan’s left boot from his match against The Rock at Wrestlemania 18. Over time, people knew they could go to me for Hogan and wrestling-related stuff. I wasn’t one of the most well-known collectors, but I had a pretty solid collection that I ended up selling. ”

Looking for something fun to do between holding down a day job and raising two sons led Rector to the idea for Kayfabe Jerky.

“Wrestling was a huge part of my life for many years and my kids have since taken over that huge part of my life. I like beef jerky, so I bought a dehydrator and it just took off from there. I had some friends who tried it and said, ‘You should really think about selling this.’ I would just say ‘Nah,’ but they kept pushing me so I said ‘Fine! I’ll do it.’ I have commercial equipment that I use now and the vacuum-seal packaging is professional, but it’s still that local, handmade type of stuff. I make everything fresh and don’t use preservatives. I use eye of round, which is less fatty on the inside and outside. I hand trim and hand slice it. I test everything first and come up with the recipes.”

Rector’s brand is still relatively young, but he’s already established a rotating stable of flavors inspired by wrestling’s colorful cast of characters. Camel Clutch Curry, Sweet Chili Music, Orient Express Teriyaki and Gorilla Press Garlic are among the flavors that have clicked with wrestling fans who enjoy both the quality and originality of the small-batch snack. Recent flavors have included Big Boot Bacon and Rowdy Roddy Pepper.

“I don’t necessarily concentrate on selling just to wrestling people, but that is primarily who I sell to. They enjoy the wrestling aspect of it. I wanted to do a taco flavor, so it was Taco Tuesday in Texas. I could just as easily call it Dave’s Jerky and have a flavor called Taco Tuesday, but this is more fun. I make my own marinades and I try to come up with funky flavors that people really don’t see anywhere else. Sure, I have teriyaki, but, as far as I know, there aren’t too many beef jerky places that do curry or chili-raspberry.” 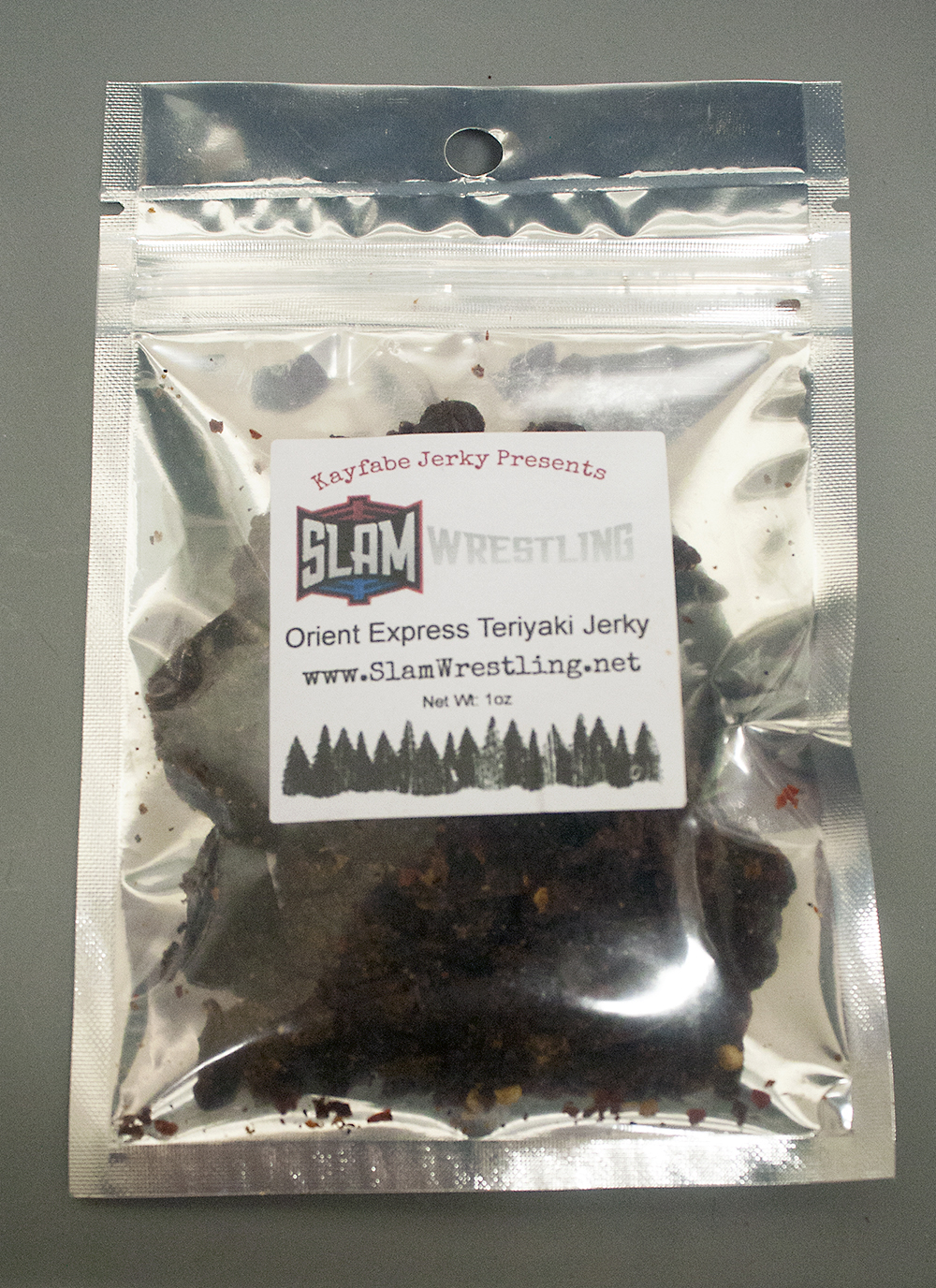 As a sample. a special SlamWrestling.net Kayfabe Jerky was made for this story’s author, Mike Andrews.

“That one, the teriyaki and the garlic are my probably my top three. I’m my own worst critic, so if it works for me and I think it tastes good, more than likely others will, too.”

Rector said his sons, Jake, 6, and Josh, 9, are also wrestling fans and the three often watch WWE programming together.

Perfecting their slam-bang snack offers another way for the Rector boys to share that interest.
“I enjoy watching wrestling more with them, now, because it’s become sort of a bonding experience. I also use the jerky to try to show the entrepreneurial spirit to my kids. A couple of months ago, I gave them each the option to choose whatever flavor they wanted me to do. My oldest son chose chili-raspberry. My youngest chose root beer.”

When asked about possible new flavors, Rector said there is one he’s been thinking about hatching.

“I’ve been toying with a recipe called Gobbledy Gooker Turkey Jerky,” he revealed.