Dave Linton Rector and his six-year-old son Joshua attended the NXT show in St. Catharines, Ontario, at the Meridian Centre. At this event, father and son picked who they thought would win the matches, discussed their likes and dislikes of wrestling, and spent time cuddling together. 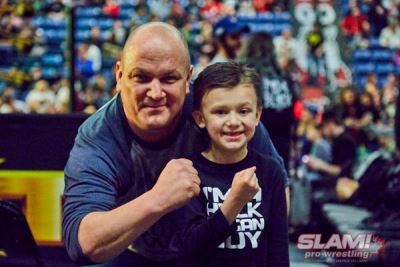 The NXT crew was full of vigour in St. Catharines and threw all of their energy into the contests that night. This extra effort made it special for Dave and Joshua as the father saw this time as a special moment in their relationship.

The former professional wrestler and referee known as L’Artiste and Phil Latio across Western New York State and Ontario has been out of the mat game for over a year and still has pangs of wanting to be in the game. As a single father, he wanted something to connect his two sons to his passion from his past life.

Going to the matches fills the gap for Dave and he sees it as a fun, bond building time for his family. “I haven’t wrestled in over a year,” said Dave. “This time means the world to me. To have my child show interest in this sport is special to me.”

For young Joshua it is about the enjoyment of the matches while he gets to sit on his father’s lap and get hugs. “I like the wrestling,” said Joshua. “It is a lot of fun.”

During the St. Catharines NXT show Dave and Joshua decided to see who could predict the winners. With each match father and son picked their favourite and sometimes it was the same wrestler. At the end of the night father and son ended their competition in a Broadway. After an evening of matches Dave picked one, Joshua picked a winner and together they picked the same wrestler to win four times.

Unlike the card the night before in Mississauga, described by my colleague Bob Kapur, the NXT wrestlers must have picked up the pace. One of the most obvious differences between the style of the current crop of NXT wrestlers and the main WWE roster was the use of the ropes. Whenever a wrestler was thrown into the ropes it was not from the centre of the ring, but rather, in close proximity to the ropes. This might seem unimportant, but the short throw into the ropes created a sense of realism as the match was tightly contested and more realistic. 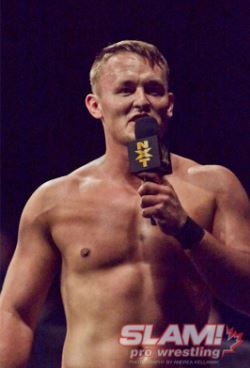 One of the wrestlers who stood out was the son of a former wrestling promoter in Germany, Marcel Barthel. From the moment he stepped onto the entrance ramp he was booed. With each measured step up the ring steps he was booed lustily, more if he slowed down his pace. He was booed just for holding the microphone and even more so for attempting to speak. He is a heat-seeking missile. When a wrestler does not have to put on a hold and elicits a response he has something special.

The crowd was hot throughout the night as the matches had the crowd out of their seats. At one point I asked Joshua why he was cheering so loudly for Ember Moon and he said, “She is very serious, fights all the time and never cheats.”

Dave held his son tight. He kissed him on the cheeks. Dave loved sharing this moment with Joshua and Joshua reveled in sharing it with his dad. (And since Dave knew so many of the wrestlers and behind-the-scenes employees from his own years in wrestling, he and Joshua got to meet a few personalities, like Nikki Cross, Aleister Black, referee Darryl Sharma and producer Steve Corino. What a great night.

Thanks to Hornet and Andrea for their help. Dave, you have given so many people joy from your wrestling and refereeing. Thank you, Dave! P.S. Don’t ever fall in my lap again.