Ring of Honor World Champion Dalton Castle had to fight off two opponents to walk out of Honor Rising with the title.

Originally, the match was supposed to be Castle against an injured Beretta but as Castle was making his entrance, the Beer City Bruiser entered the ring. 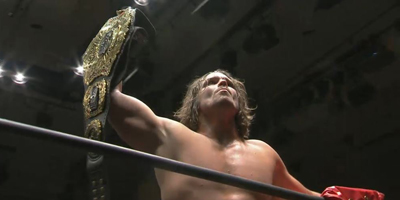 “Since Hirooki Goto had to cheat to beat me last night I am going to take some Ring of Honor gold. I am in this match right now,” Bruiser declared.

Bruiser then attacked Beretta and Castle while the official tried to get Bruiser to leave the ring.

“Let’s put his fat ass in this match as well,” said an infuriated Castle to the official making the bout a three-way dance.

Castle and Beretta double teamed Bruiser thrashing him outside the ring and throwing him into the ringside barrier. Bruiser bounced back and clotheslined both Beretta and Castle.

With a torn bicep and his right pectoral muscle torn, Beretta resorted to throwing a steel chair at Bruiser and Castle. Beretta sat Bruiser on the chair and hit him with a running missile drop kick from the apron.

Bruiser would turn things around on Beretta squashing him with a frog splash from the top rope. Incredibly, Beretta kicked out.

Castle would retain the Ring of Honor World Championship by taking Beretta out with a suplex and lifting Bruiser up for an astonishing Dead Lift German Suplex. 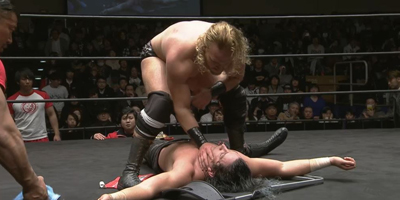 At Honor Rising, the Bullet Club civil war continued in two separate matches. The Young Bucks tried to prevent Hangman Page from beating a downed Jay ‘Switchblade’ White with a steel chair at the end of their match against White, Chuckie T and Yoshi-Hashi. Once they left the ring though, Page delivered his Rite of Passage piledriver to White on the steel chair. Page held up the IWGP United States Heavyweight Champion confirming that he wants to challenge for the belt.

The reunited Golden Lovers (Kota Ibushi and Kenny Omega) had their hands full with Marty Scurll and Cody. When Cody fled the ring and took a seat in the second row, Omega leapt over the top rope, over the steel barricade and right into Cody’s lap. Cody tried to throw Ibushi off his game by kissing him but The Golden Lovers pinned Scurll with a double Golden Knee Trigger to the face. 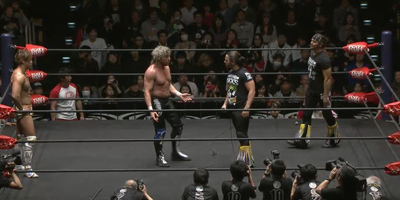 After the match, the Young Bucks came down to the ring. The Bucks denied having any kind of issue with the Golden Lovers and accepted their prior peace offering.

“So, I guess that means see you around,” said Matt.

Henare puts up a great fight as he really takes it to The Bruiser. A frog splash from the top rope splatters Henare all over Korakuen Hall.

Lethal dodges a Yujiro super kick which hits Owens instead. Owens is spiked with the Lethal Injection. Lethal flips out of an attempted chokeslam by Hikuleo. Finlay pops Hikuleo with a Stunner, Juice hits Hikuleo with Pulp Friction and Lethal lands Hail to the King to put Hikuleo away.

The crowd is solidly behind Hiromu Takahashi. Good taste they have. Bushi and Hiromu take Taguchi and Gordon outside the ring and slam them into concrete columns and signs. Gordon is destroyed when Hiromu lifts him up into an Electric Chair and Bushi executes an MX from the second rope.

Cheeseburger achieves quite a number of near falls but is pinned by Guerrilla Warfare. After the match, Tama Tonga and Fale lift Cheeseburger’s hands up in victory. Tonga Gun Stuns Cheeseburger.

Jay ‘Switchblade’ White is super kicked by The Young Bucks before he can land Blade Runner on Page. Page pins White with Rite of Passage.