MISSISSAUGA, ON – My, what a difference a year makes. Back in late 2016, an NXT show was a must-see event, featuring some of the brightest and best talents in the company, names like Samoa Joe, Bobby Roode, Asuka, and Shinsuke Nakamura. Stars that could be called up to the main roster at any time, belying the positioning of NXT as a “developmental” brand. But at tonight’s NXT house show in Mississauga — the first of this weekend’s four Ontario shows — the gap between NXT and the main roster was very apparent. 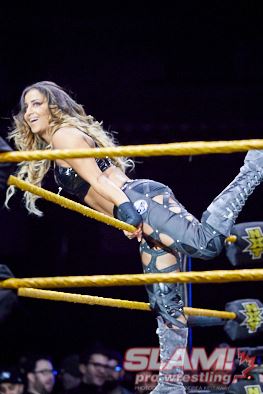 There were some bright spots during the show, but to a large extent the show featured a number of passable but unremarkable matches between characters that were either under- or simply un-developed.

Now to be perfectly fair, this writer doesn’t watch NXT every week, and isn’t familiar with all of the characters and storylines. It’s totally possible, then, that the lack of an understanding of the context for the matches impeded my enjoyment of the event.

But, presumably, many of the crowd that half-filled the Hershey Centre would be fans, and even they seemed somewhat subdued throughout the evening.

Which is shame. Because NXT has proven it can put on a great show. Unfortunately, they just didn’t bring that kind of fire to Mississauga. Hopefully the rest of the tour will pick up. Or else, there may not be a NXT time.

– A pre-recorded video of Triple H kicked off the show, welcoming us to NXT Live.

– Before the ring introductions, the ring announcer tried to play up the crowd, and/or give some background information on the performers. For example, she let everyone know who was making their NXT Live debut, and tried to get the crowd excited for matches involving Canadians.

– In a classy move, they kicked off the evening by playing our national anthem. In your face, NFL.

– Match 1: Ricochet beat Buddy Murphy after a double-somersault senton splash off the top rope. This one started off with a funny moment – after a few sequences of technical wrestling and neat gymnastics, Murphy ended that with a simple stiff boot to Ricochet’s face.

– Match 2: Nikki Cross from SAnitY beat hometown girl Aaliyah. This was an okay match. For the most part, Nikki aggressively punished Aaliyah, including trapping her in the ring apron and pounding away at her. Aaliyah tried to fight back, but she ultimately fell to the Cross-Roads for the pin.

– Match 3: Killian Dane from SAnitY beat Marcel Barthel. Barthel is doing a heel “Wunderkind” Alex Wright character (cocky young German, but with no dancing). This was a power vs. speed match, with the big man Dane ending things after a couple of Avalanches and a Vader Bomb.

– Match 4: Roderick Strong submitted Fabien Aichner with a Boston Crab. Aichner is like the default Create-a-Wrestler in a WWE video game with nothing remarkable about his look or his character. Roderick looks better now than his TNA days, and hasn’t lost a step in terms of his backbreakers. A fine match, but nothing to write home about.

– Match 5: SAnitY (Eric Young and Alexander Wolfe) beat the Authors of Pain. Ontario’s Eric Young got a pretty good “welcome home” chant before the match started. A fairly standard tag team match, with Wolfe being held captive in AoP’s corner for some time before getting the tag to EY. SAnitY hit a double-team SAnitY-Drop on one of the Authors for the pin. 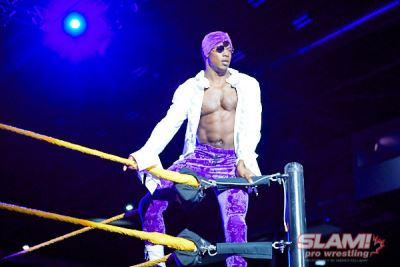 Velveteen Dream hypes his match later in the night.

– Before the intermission, Velveteen Dream cut a Mississauga-specific promo to set up a match with Aleister Black later on the show.

– Match 6: Ember Moon retained her NXT Women’s Championship over Bianca Bel Air. This one saw a lot of power moves by both women, but was pretty sloppy. A very botched Eclipse led to a very botched three count (it looked like Bianca kicked out, and the ref appeared to stop the pinfall count, but the bell rang and the match ended anyway).

– Match 7: Aleister Black beat Velveteen Dream after a spinning kick to the face. This had some bright spots that broke up some of the dullness. One highlight — and this was likely the craziest spot of the night — saw Black hit a nice Asai moonsault from the second turnbuckle to the floor, landing hard on Dream. There was one pretty funny moment early on. After Black flipped all over and around Dream, making him look stupid, Dream demanded Black sit down like he does during his entrance. When Black refused, Dream either tried to show him how to do it, or was mocking him, but sitting down in the ring, Black-style. Black looked at him, shrugged, and then kicked Dream right in the face while he was in his seated vulnerable position.

– Match 8: Johnny Gargano and Candace LeRae beat NXT Champion Andrade “Cien” Almas and Zelina Vega in a mixed tag team match. This was a pretty standard mixed tag affair, with nothing to write home about. At one point, there was a series of superkicks… remember when that was a finisher? Damn you, Young Bucks. Gargano and LeRae locked in simultaneous Gargano Locks and Vega and Almas tapped out at the same time. After the match, Gargano cut an indyriffic promo to thank the crowd for coming and proclaiming that everyone in attendance “are NXT.”