I’m going to start this article with a statement some may find controversial — I let my then two-year-old son watch wrestling, and play with wrestlers. The first question this may pose to many is likely, “Is that a good idea?” and the other question is probably, “Is that responsible parenting?” This comes down to a matter of opinion for me, and is something I’d like to explore.

I recently took my now three-year-old son, Joshua, to a Tuesday night Smackdown show in Buffalo, New York. He had a Kanyon figure in one hand while wearing a WWE shirt. 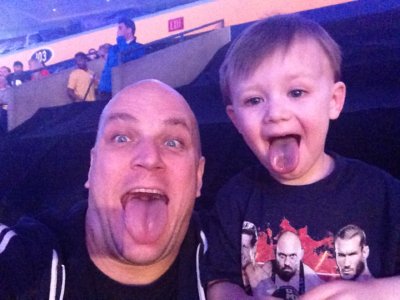 Dave and Josh at a WWE Smackdown show in Buffalo.

I reflected back on the last year in how he got involved with wrestling. Was it inherited or did I have something to do with it? Maybe both?

We play a name the wrestler game in which we line up over 20 used LJN and other figures and I ask him to find them for me. He can identify the The Iron Sheik from The Original Sheik. By far his favourite wrestlers include Hulk Hogan, Roddy Piper and the Iron Sheik. I’ve been collecting wrestling figures and hope that one day a “graded black card LJN” means something to him. 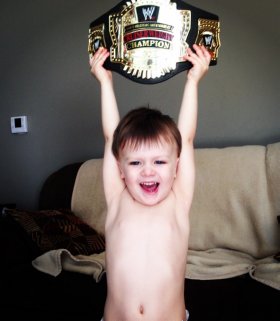 He rarely stays still but at shows he sits and is mesmerized by the wrestlers — mainly laughing, not afraid, of the action in the ring. Currently, my family and I moved closer to home to Western New York, and luckily this is another area full of independent wrestling.

My wife and I both grew up watching wrestling. It all comes down to parental choice and responsibility. If you decide that wrestling has its place in your child’s life, it’s how you as the parent choose to introduce and manage it.

Luckily for me, my wife is okay and promotes his interest in play wrestling. In fact she usually plays the role of Hulk Hogan against the Sheik.

However she’s not keen with him getting into the business due to high concussive and injury rates (she told me to say that). She saw a lot of this since she’s a sports chiropractor. Maybe my son will work with athletes like my wife did, and we will support hope in what he chooses to do.

However, I can hope my son continues to embrace his love of wrestling, it’s a special bond that I share with him.