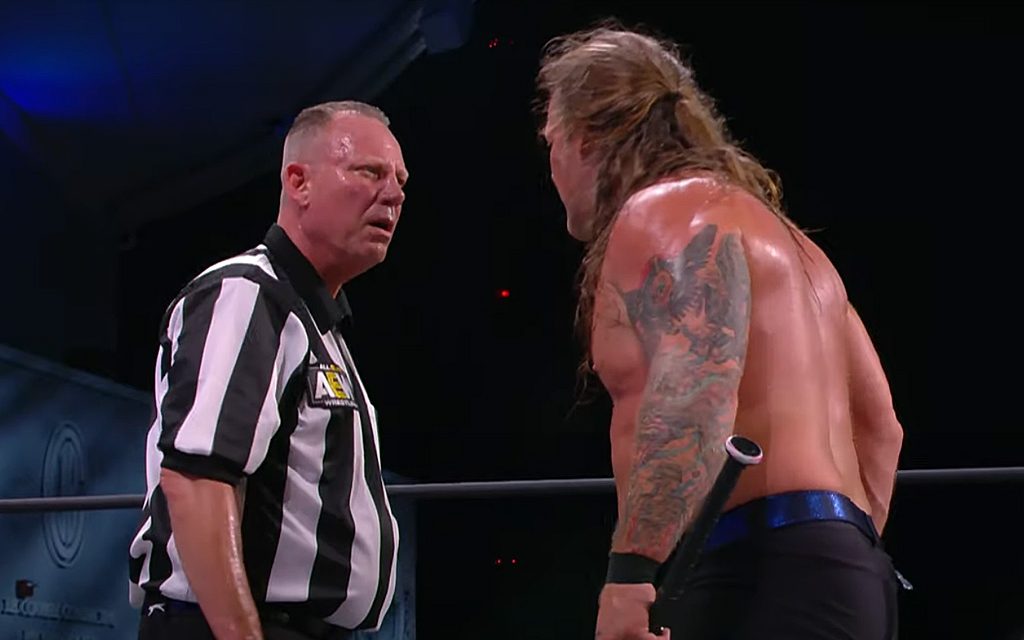 In the great glossary of “wrestling terms that you’re not sure what they mean until they actually play out,” Tag Team Appreciation Night definitely warrants an entry. It’s not likely to be that every match is a tag team bout, considering Cody has a title defense and there’s another Chris Jericho-Orange Cassidy showdown in the offing. Whatever the case, we’re about to find out what’s in store from Daily’s Place in Jacksonville, live on TNT.

Worth noting: A (very) limited amount of fans were permitted to attend tonight. All appear to be wearing masks, and the venue is outdoors, so this seems OK.

Strength in numbers is kind of the Dark Order brand, so it’s hardly surprising that Uno has a bunch of the henchmen attack Matt and Nick Jackson before the bell even rings. Of course that’s just going to make the Bucks’ inevitable heroics more impressive, right? Highlights from the commentary team include Jim Ross and Taz teasing each other over the uranage slam almost accidentally being called the Rock Bottom, which, understandable. Dark Order finally does the logical thing and hurls Matt back up the entrance tunnel and has their minions block him from returning to the ring, but Nick steals a win anyway. You didn’t think the Bucks were taking a loss on this particular night, right?

Flanked by his campaign crew, MJF makes his way out toward the ring. Not sure why his workers put up with the abuse they receive, except that it’s part of the story for them to do so.

As part of  Tag Team Appreciation Night, wrestlers are being asked who their favorite tag team is. Kenny Omega quickly answers that his in the Young Bucks, seemingly disappointing Hangman Adam Page, who was going to say “us.” It’s actually funny to see Page bummed out.

After revealing some polling data that shows him ahead of Jon Moxley in every state by 500% to -1000%, MJF uses his address time to run down “Dictator Jon” for not being in the arena tonight. His tough talk about how scared Mox is, though, turns to trepidation when Moxley’s music hits, and the  AEW World Heavyweight Champion outsmarts MJF by simply walking out the regular entrance after his bodyguards (including Wardlow) are sent to prepare for him to appear from the stands. Mox delivers a Paradigm Shift and then grabs a mic backstage to promise MJF that they won’t be finished until he emerges triumphant at All Out.

“Matthew” Hardy says he will continue to see red until he gets some payback for what Sammy Guevara did to him last week. Conveniently, Hardy’s 10 days until he is medically cleared end on Saturday, the 22nd, when Dynamite has to take place on a different night because of the NBA Playoffs. As proof of how fired up he is to end Sammy, Hardy sees someone he thinks is Guevara and ambushes him, only to discover it’s a referee. Hey, give him a 10-day suspension for that too.

Cody is sporting the brand new TNT Championship belt, which is a definite improvement over the original. It’s interesting how AEW is pushing this match as a big deal — Sky definitely deserves that treatment from a talent standpoint, but he hasn’t been on TV all that much since the pandemic struck. The announcers push the idea that Cody has some rib damage he’s dealing with, as well as questioning whether defending the belt every week — on top of his role as a company exec — is wearing him out. Still don’t think Sky is getting the win, but they are seeding things for Cody to lose sooner rather than later. Today is not that day, however, as Cody uses a pair of Cross Rhodes to retain.

Before Cody can congratulate Sky, Mr. Brodie Lee appears on the screen (with the old belt) and threatens to take Cody’s shiny new belt next Saturday. But at least he says he’ll give the old title back. What a guy.

Private Party gives props to the Hardys as their favorite tag team of all time. Makes sense.

Like Sky, Jurassic Express is worthy of a title shot but doesn’t figure to be the team to take the belts. If there’s a title change coming, it’s probably not coming until the pay-per-view. Several times, the camera cuts to Kazarian watching alone in the stands, so that’s something to file away for later too. As expected, the champs retain after hitting Jungle Boy with the Last Call.

The Butcher and The Blade like the gritty tag teams, so they name Road Warriors as their favorite team ever.

Finally, we get to what appears to be the meat of Tag Team Appreciation Night, as FTR and the Young Bucks share the ring with the Rock ‘n’ Roll Express and Arn Anderson and Tully Blanchard. Ah, I see what’s going on here. The Bucks identify with the Express and FTR with Arn and Tully (can’t call them Four Horsemen on this show, naturally). There’s a lot of mutual respect going on between the four duos, to the point where you’re just sort of waiting for something to go awry. That moment arrives when Blanchard gets the mic, running down both current teams because they aren’t the champs and bringing up his long-running beef with former partner Anderson. A short scuffle breaks out, leading to FTR attacking the Rock ‘n’ Roll Express. Omega and Page (drink in hand)

To the back we go for an interview with Mike Chioda, who made his AEW debut to call Cody’s bout earlier in the show. Probably should have mentioned that earlier. Jericho looks forward to having Chioda officiate his match and is confident that the 33-year vet will “do the right thing” when the moment arrives.

Say hello to Monroe, who is making her AEW debut in this match. She’s certainly bold, doing the “Is this your champ?” thing with Shida trapped momentarily in the ropes. That’s not going to keep her from having her head handed to her, methinks. Shida shows a new twist by making Monroe tap out to what she called the Full Metal Muffler in Japan.

It wouldn’t be a show with Lance Archer if he wasn’t beating up dudes in the locker room while Jake Roberts cuts a promo. So there you go. He’s also written “Everybody Dies!” on Roberts’ back.

You have to hand it to Jericho for his devotion to his feelings about the ruined jacket, continuing to wear it to the ring. Both the Inner Circle and Best Friends are banned from ringside, so no outside interference is possible. Wink, wink. We get to see a bit more of Cassidy’s all-around game than usual, including an ankle lock. Jericho attempts to bring Floyd into play but is halted by Chioda. Santana and Ortiz run to the ramp and are instantly neutralized by Best Friends, but it appears they were just a distraction anyway because Jake Hager sneaks into the ring and hits a spinebuster. Cassidy kicks out, and even after getting hit with a mule kick, he pins Jericho — though the finish is somewhat awkward and not the huge moment it could have been otherwise. The show has to cut out quickly because it’s up against the end of its time slot, so I guess we’re out of here. See you in 10, not seven!

OK so the upcoming Saturday episode looks like it will have more tag team wrestling than Tag Team Appreciation Night, and the Jericho-Cassidy finish lacked some of the impact it could have had. Still a fun evening overall.