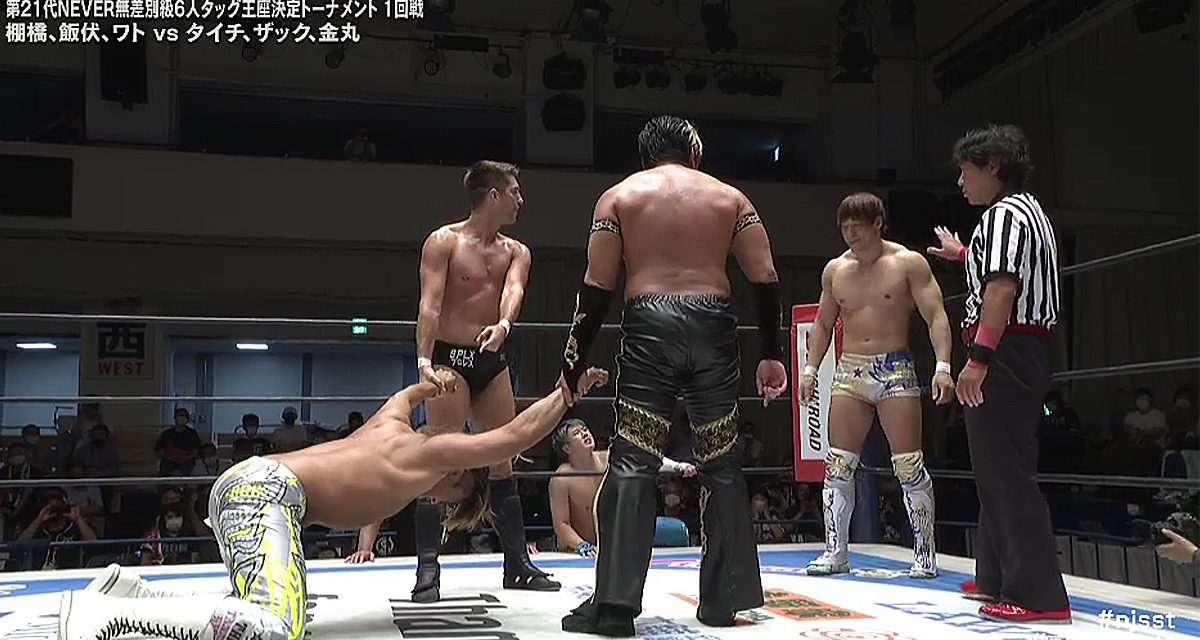 Losing 7 out of the last 10 tag team matches to Suzuki-gun one can understand why Kota Ibushi has been a bit miffed with his Golden Ace partner Hiroshi Tanahashi. One of those defeats included dropping the IWGP Tag Team Championships to Suzuki-gun’s Dangerous Tekkers (Taichi and Zack Sabre Jr.) at NJPW Dominion in Osaka-Jo Hall.

Lately, the Tekkers have been trying to lure Ibushi to the dark side even encouraging him to ditch his partner once and for all.

At night five of Summer Struggle, Ibushi picked a side as he, Master Wato and Hiroshi Tanahashi took on Suzuki-gun (Yoshinobu Kanemaru, Zack Sabre Jr. and Taichi) in a round one match of the NEVER Openweight 6-Man Championship Tournament.

Hiroyoshi Tenzan came to the ring with the rest of the team to support his new pal Wato. Tenzan is wearing street clothes. Ibushi has his head buried in a turnbuckle as Suzuki-gun makes their entrance. Taichi and Sabre Jr. chat with him briefly.

Tanahashi pushes both Ibushi and Wato back. He wants to start the bout. Ibushi argues a bit and then lets Tanahashi have his way. Tanahashi calls out Taichi. Tanahashi doesn’t break clean when he backs Taichi into the ropes. Tanahashi goes berserk on Taichi with a flurry of blows. Taichi strikes back with a kick to the head while the rest of Suzuki-gun attacks Wato and Ibushi from behind on the floor.

“You have to make a choice, mate,” warns Sabre Jr. as he stands on Ibushi’s throat.

Sabre Jr. and Kanemaru double-team Tanahashi on the floor; roll him back into the ring for Taichi to choke out some more. Suzuki-gun obliterates Tanahashi’s knee for almost the entire match keeping him away from his partners and corner. Every time The Ace attempts a comeback his knee is knocked out from under him.

Sabre Jr. and Taichi hold Tanahashi prone in the middle of the ring daring Ibushi to come in and take out his frustration on Tanahashi. Ibushi steps into the ring to ponder things.

Ibushi shoves Sabre Jr. and Taichi away. He lifts up Tanahashi as if to deliver a Kamigoye to him. Instead, he drops Tanahashi and attacks Taichi and Sabre Jr. The crowd cheers.

As Ibushi celebrates clapping Tanahashi on the back, Sabre’ Jr. hammers on him. Tenzan has had enough and leaps onto the apron. Sabre Jr. shoves Tanahashi out of the ring under the bottom rope. 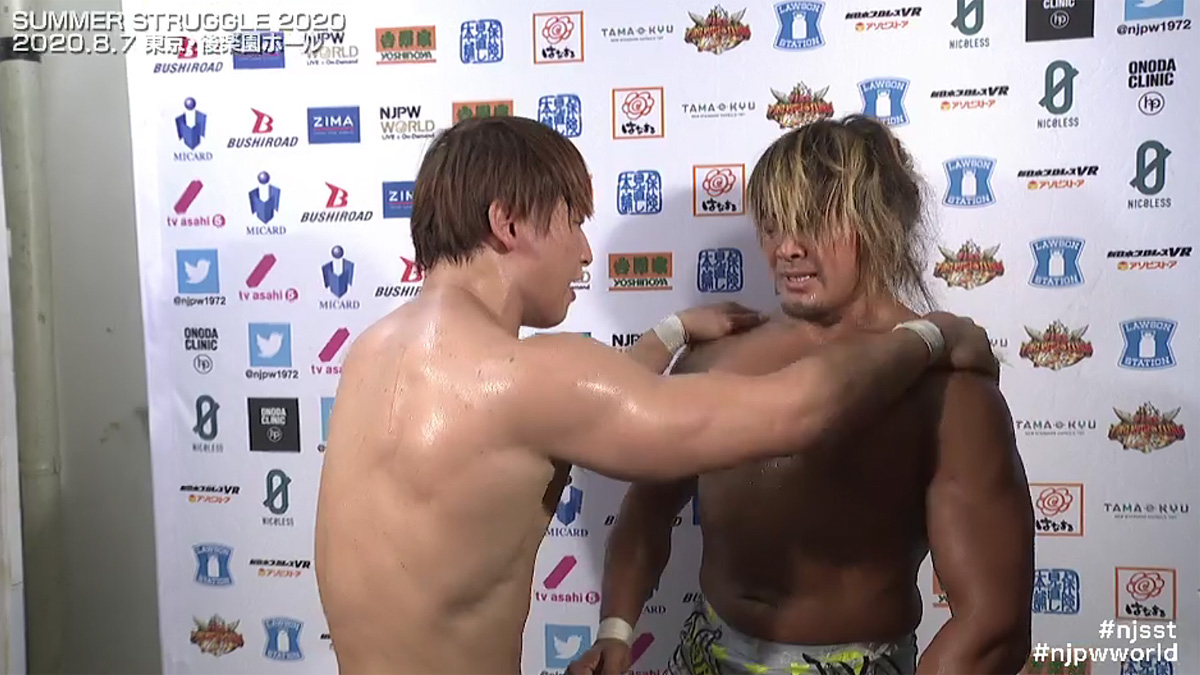 Ibushi helps The Ace to the back. The two seem to bury the hatchet and their frustrations in a backstage interview where a smiling Ibushi congratulates Tanahashi on the win.

Honma wants to start the match against Ishii. Neither man can knock the other down. Honma chops Ishii all the way back to his corner. Honma and Makabe double-team Ishii. In a fun moment, Taguchi and Honma deliver a double Kokeshi to Ishii.

Taguchi is all fired up. He doles out some Funky Weapons to Chaos. He splashes Goto on the floor from the top rope.

Yoshi-Hashi is flattened by two flying Kokeshis but he kicks out. Honma heads to the top rope. Goto catches him. Honma cannot fight off all of Chaos. Yoshi’s super kick sets him up for a double-team GTW. Honma taps out to Yoshi’s Butterfly Lock.

Here are the updated tournament brackets. 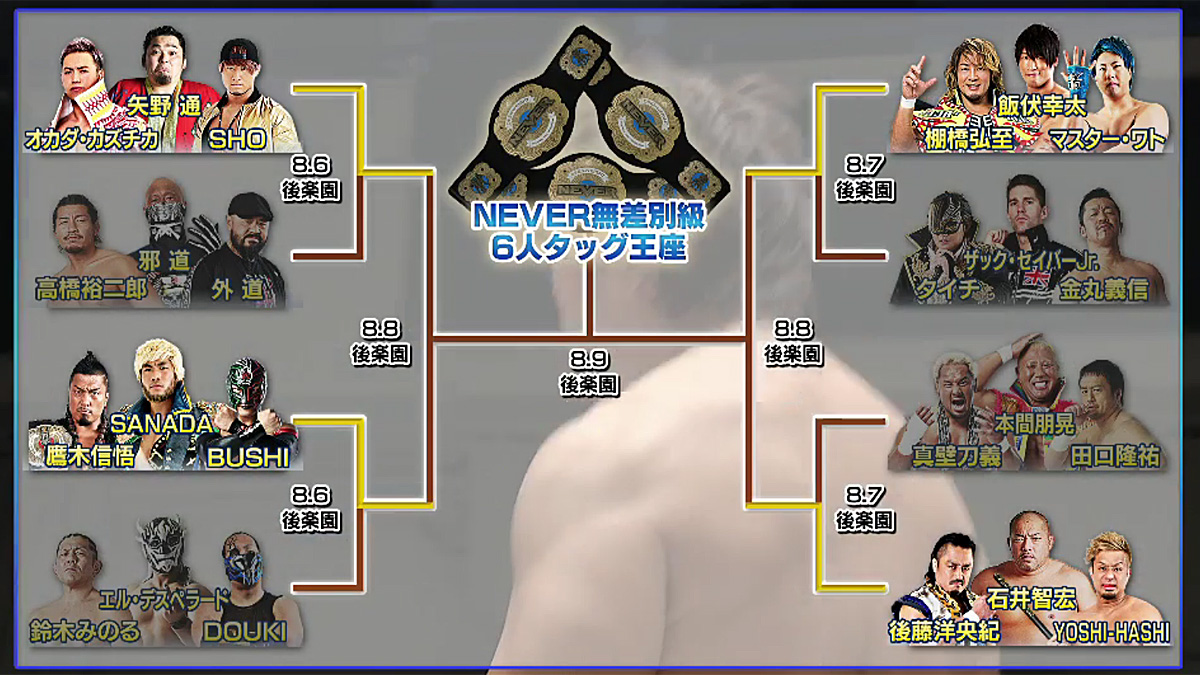 Yuya Uemura puts up a fight but Nagata takes him to school. Nagata lands an exploder suplex and makes Uemura submit to the Nagata Lock III, same as last night’s card basically.

Sorry, Young Lions. You ain’t got a chance. Kojima pins Tsuji with his lariat after absorbing about 151 forearms shots to the face.

Douki taps out to Sho’s arm lock. Suzuki throws a fit. He goes after the announcers, argues with the official. 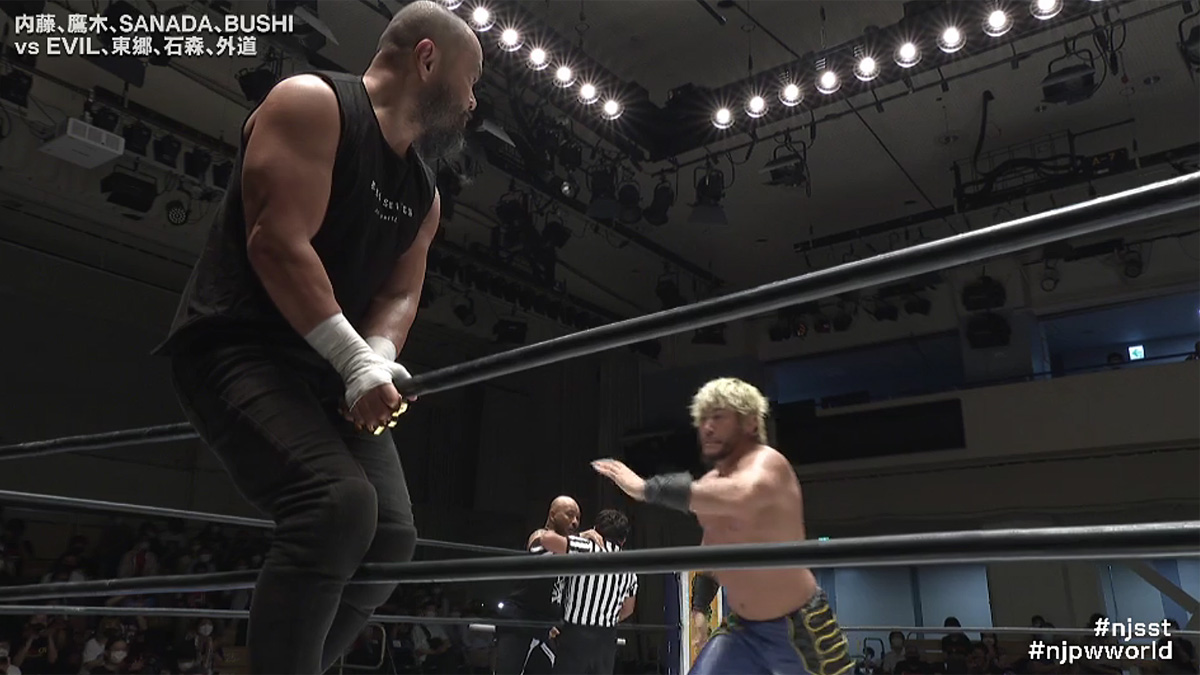 Bullet Club jump starts the match taking Chaos to the floor while Ishimori and Shingo battle inside the ring. Shingo easily handles both Ishimori and Togo. The crowd gets behind Shingo. Jado comes down to the ring with his kendo stick. Gedo takes a swipe at Sanada with his brass knuckles while the official is distracted. Sanada crotches him on the top rope and kicks the ropes for good measure. He drop kicks Jado off the apron and locks Skull End on Gedo for the submission. Naito and Evil have each other by the hair. Young Lions separate them. 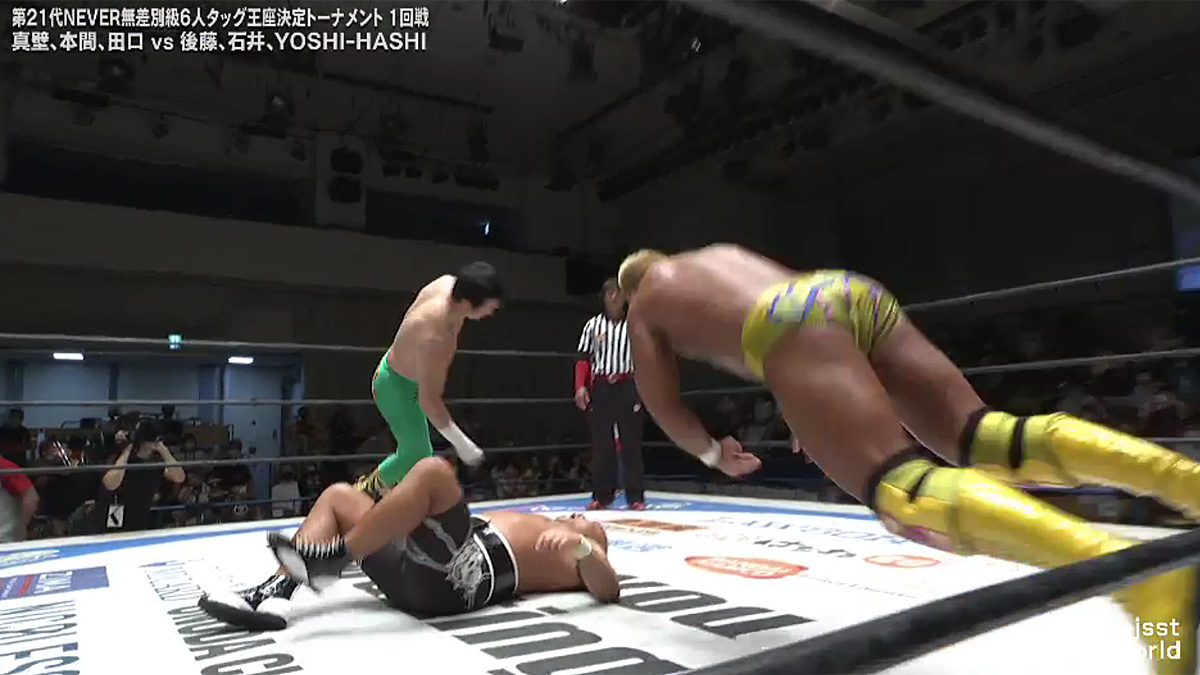 Slightly better than Night Four but not by much. The NEVER Openweight tournament has injected some intrigue as did Ibushi’s decision.