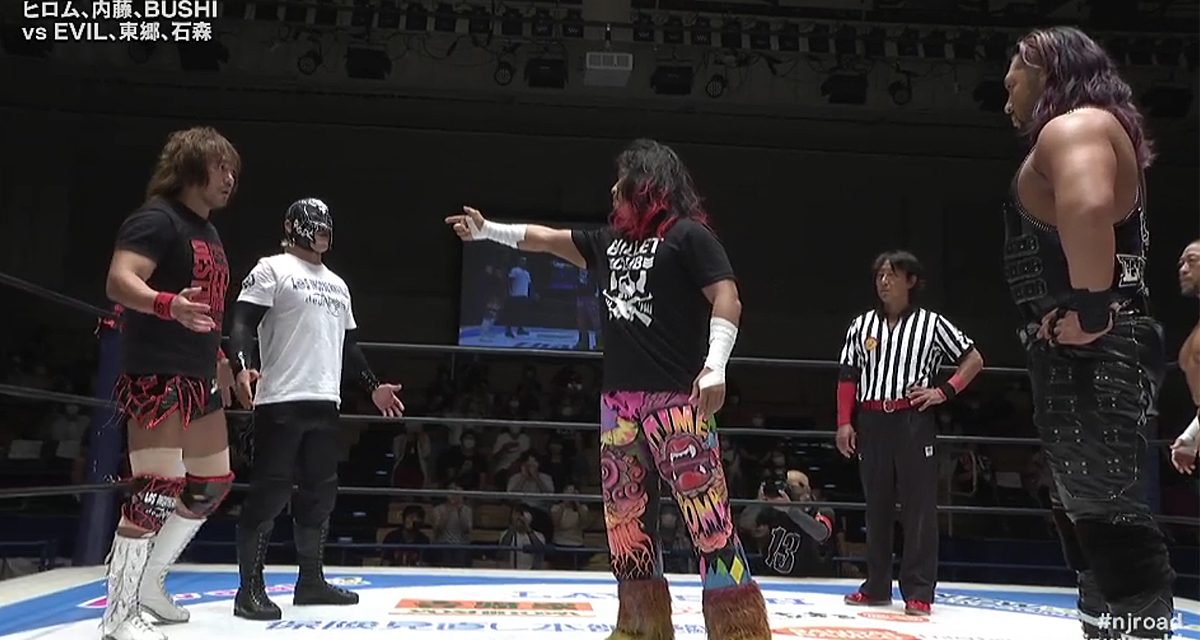 They were looking for revenge. They got punked instead.

In the main event of New Japan Road, Los Ingobernables de Japón got more than they bargained for as new Bullet Club member Dick Togo would live up to his new ‘Spoiler’ nickname.

It is interesting to note that during Bushi’s entrance he didn’t spit mist into the air as he usually does. Probably due to the pandemic concerns.

Dick Togo is now nicknamed ‘The Spoiler’ and Jado is on commentary, for some reason. 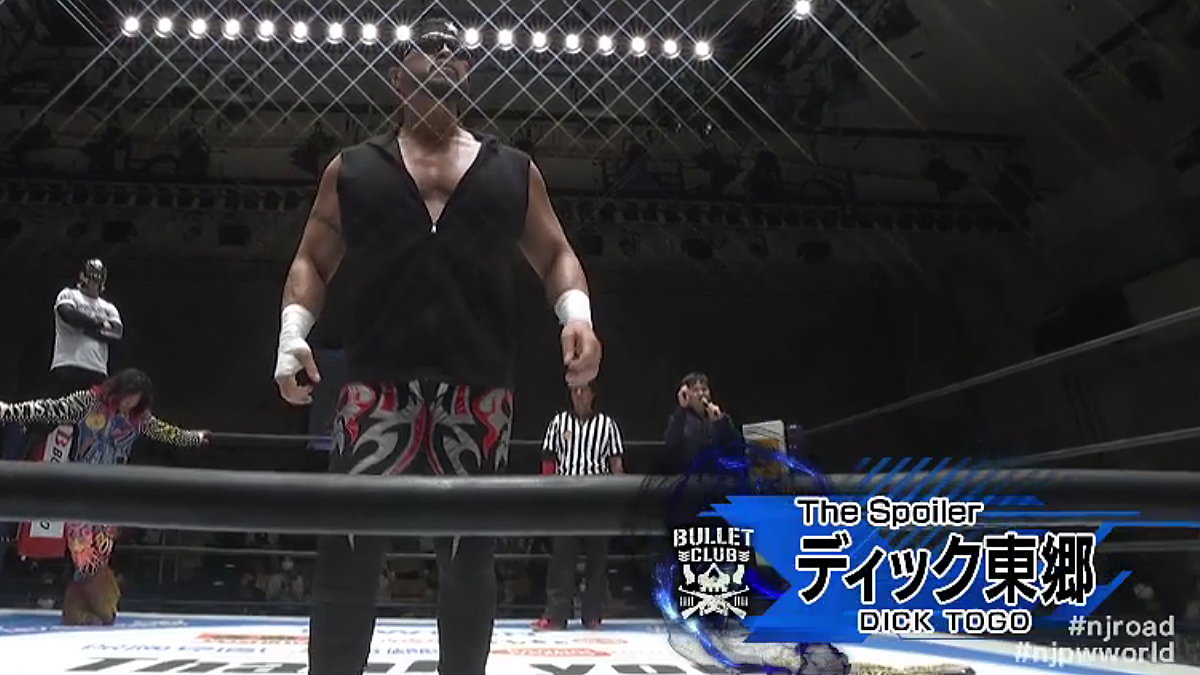 Hiromu Takahashi, who will face Evil for both the IWGP Heavyweight and the IWGP Intercontinental championships at this Saturday at Sengoku Lord in Nagoya, stared at Evil during Bullet Club’s introduction not even removing his leather jacket.

When he did Hiromu was wearing a Bullet Club shirt. He pointed a finger gun at Evil and then at Naito confusing everyone. Showing his true allegiance he spun around punching Evil in the face.

Immediately everyone brawled on the floor as the bad blood boiled over. Hiromu chokes out Evil with the Bullet Club shirt and throws it at him. The crowd in attendance cheers. 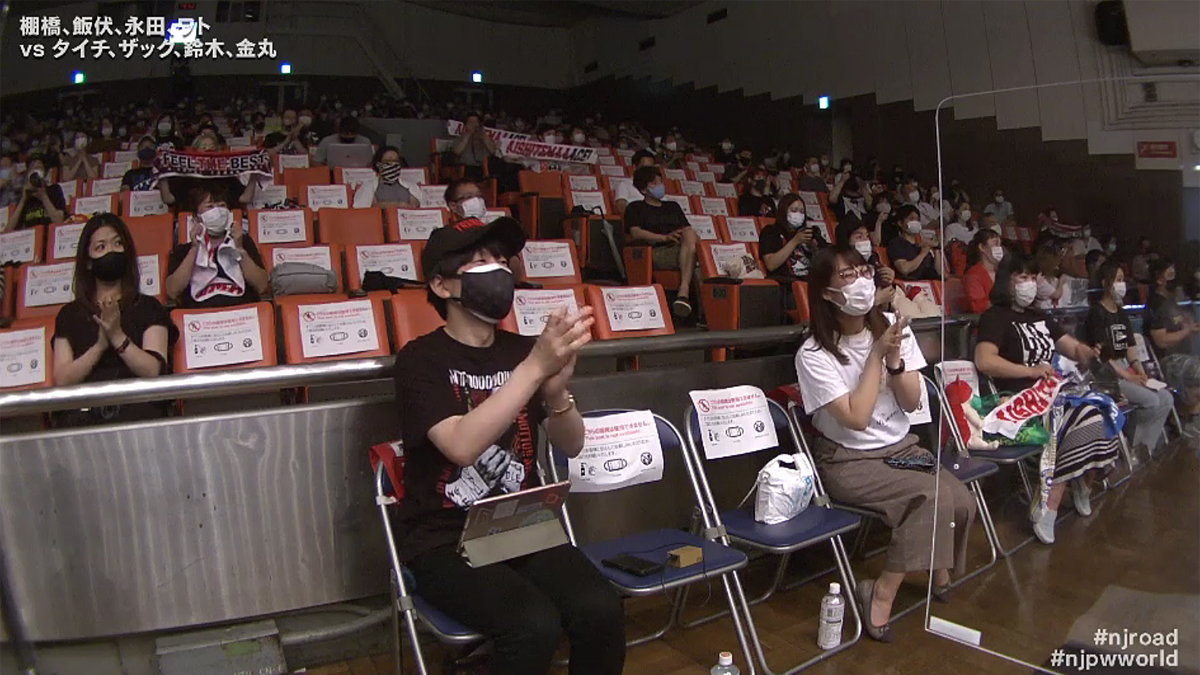 Los Ingobernables de Japón do their fist bump, salute thingy, once they have stomped Ishimori into the mat.

Evil takes on both Hiromu, Naito and Bushi on the floor himself. Togo’s first action is against Naito. He does a headstand while cranking down on Naito with a headlock. Togo absorbs all of Naito’s blows, escapes Destino only to be put in a Boston Crab. Evil saves Togo.

Hiromu tags in foiling Togo, Evil and Ishimori clearing the ring of them and sending them crashing into a barrier with a shotgun drop kick off the apron. Evil distracts Red Shoes while Ishimori and Togo beat on Hiromu.

Naito and Bushi hold up Evil on their shoulders so that Hiromu can drop kick him off the top rope. 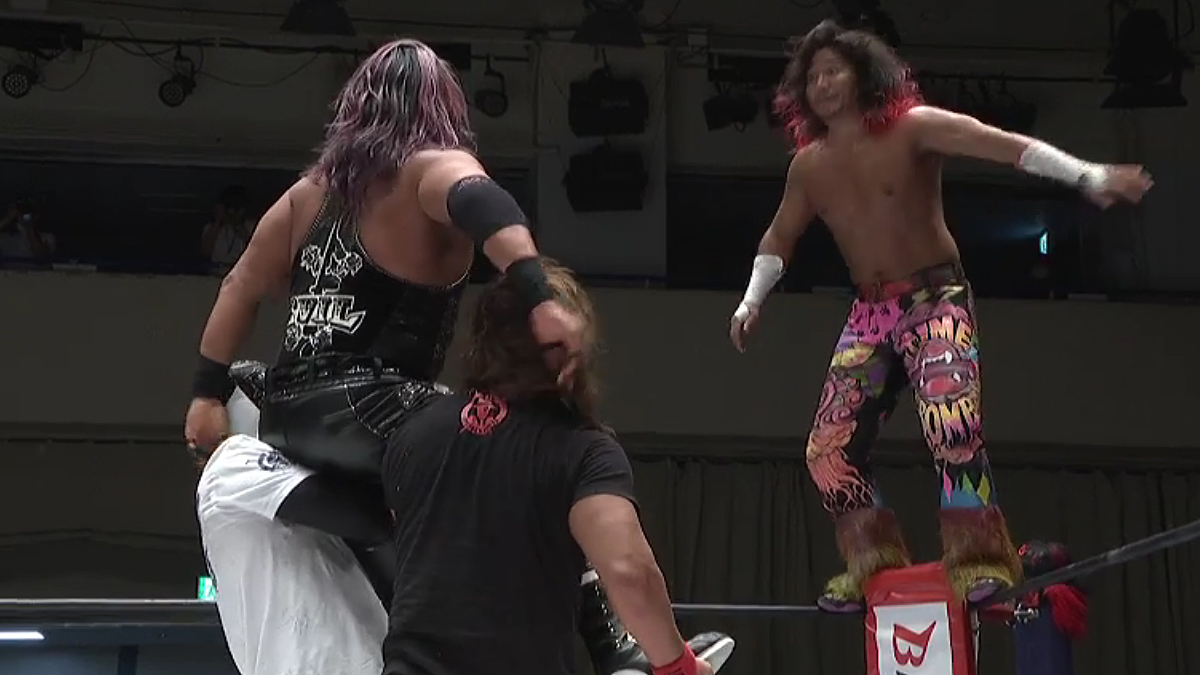 Togo chokes out Bushi with his garrote while Ishimori has the official’s attention. Evil gets the 1, 2, 3 with Everything is Evil.

Hiromu was prevented from getting his hands on Evil by Togo who choked him out with the garrote too. Evil faked giving Hiromu Everything is Evil. Instead, he just dumped him on the mat.

Tsuji and Kojima continue with friendly feud as Tsuji tries to prove himself as a Young Lion. I assume he is likely to move up soon as he has been featured often. Uemura gets into a chopping match with Tenzen. Things don’t end well for Uemura. Kojima pins Uemura with a Lariat. 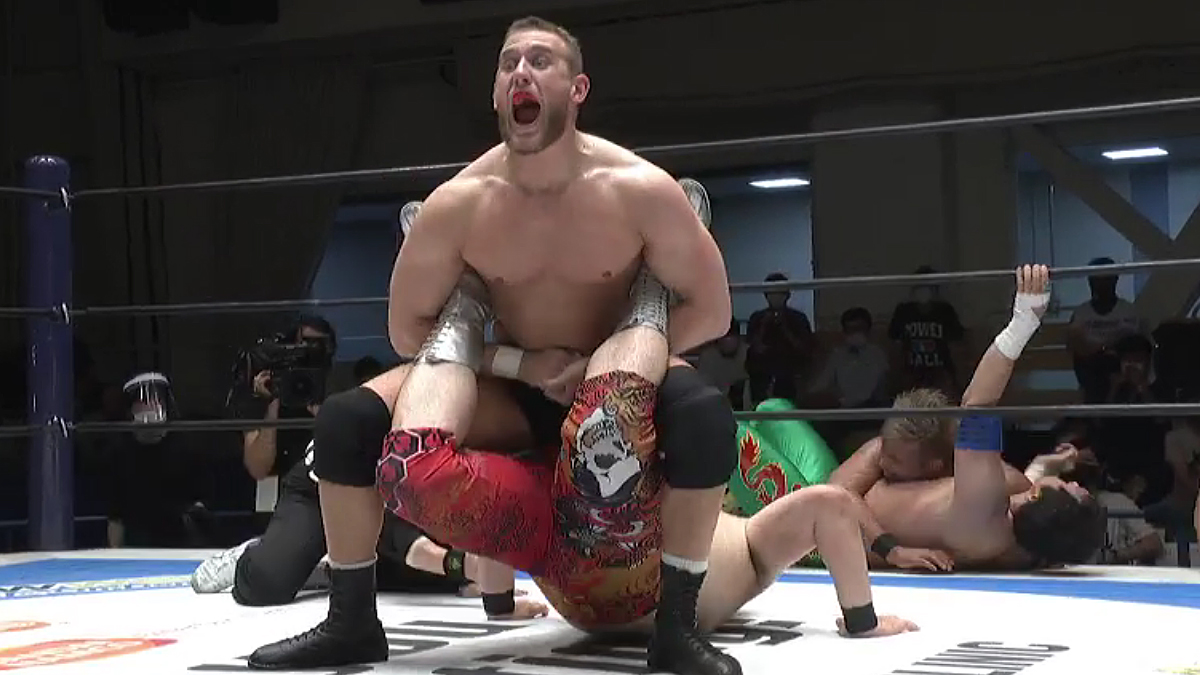 Although they are all faces nobody holds anything back during this bout. Honma and Ishii engage in a chopping duel. Honma wins that round but misses his falling headbutt on Ishii; however, he hits one on Yoshi-Hashi. Taguchi and Yano take turns directing their respective corner attack trains. Yano refuses to submit to Kidd’s Boston Crab. Yano atomic drops Kidd, throws him into an exposed turnbuckle, punches him in the “lower abdomen”, rolls him up for the pin. 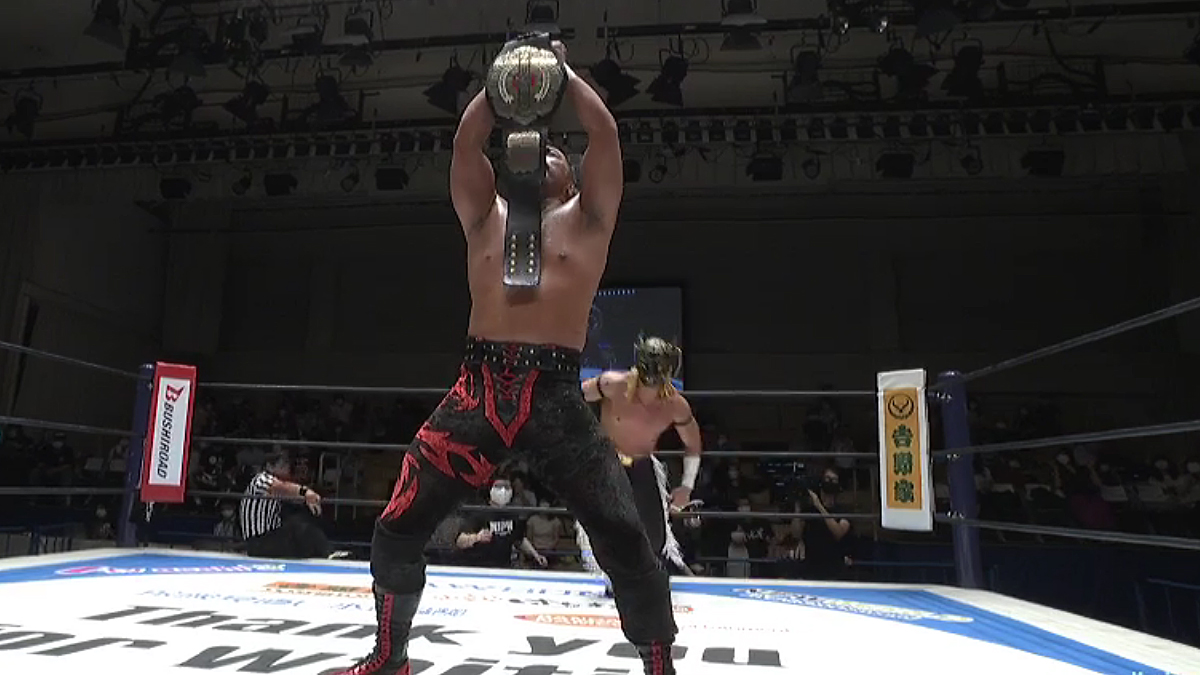 Takagi is still pissed that Desperado has stolen the Never Openweight Championship belt. As Takagi enters the ring, Desperado taunts him with it. Takagi loses it hammering on Desperado before the bell can even ring. Takagi rains down fists on Desperado in a corner. Douki intervenes. Takagi takes on both Suzuki-gun members splashing them in separate corners.

Douki gets sneaky. As Sanada is about to springboard off the ropes he yanks him down. Sanada falls to the arena floor hard. Desperado takes Takagi to the floor throwing him into the ringside barrier and bashing his knee with a steel chair. A limping Takagi threatens to bring a steel chair into the ring. The official discourages him from doing so. Sanada makes Douki submit to Skull End. Shingo is still hobbling around after the match. Desperado continues to mock him. Shingo gets his belt back though. As he poses with it in the ring Desperado attacks him from behind and steals it for it a second time. 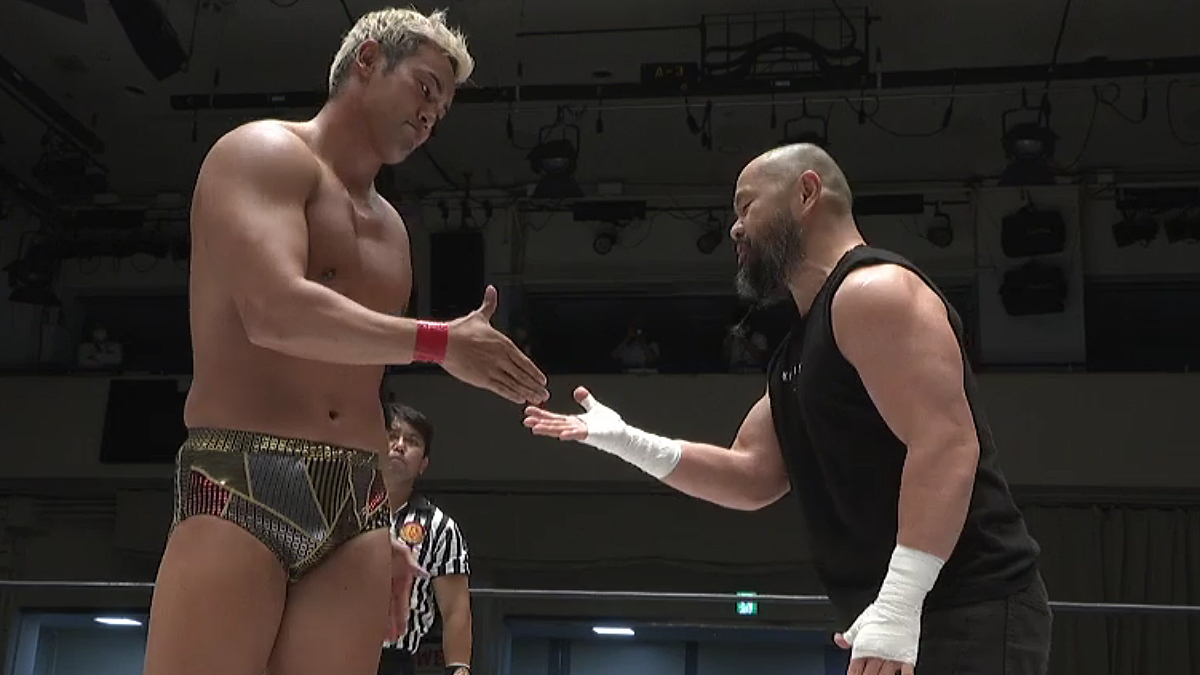 Gedo wants to be friends. Okada tricks him into almost shaking hands. Goto and Okada work over Gedo just beating the tar out of the Bullet Club mastermind. Goto puts Gedo away with a GTR. Yujiro and Okada share some post-match pleasantries when Yuiro shoves him.

Master Wato leads the faces to the ring which just happen to all have a gripe with Suzuki-gun at present. The Ace gets a big pop arriving on the scene. As the introductions are being made Kanemaru grabs Master Wato by the hair, pushes him. Zack Sabre Jr. gets in Ibushi’s face. Taichi does the same to Tanahashi.

Suzuki and Nagata pick up right where they left off before Suzuki was made to stay home over COVID concerns. Kanemaru has Wato pinned with Deep Impact but wants to inflict more damage so he spikes him with a brainbuster. Suzuki and Nagata throw hands and insults while Young Lions fail to break them apart.

Fires were lit under the current feuds which was a good thing. The matches were mostly mediocre which was a bad thing.