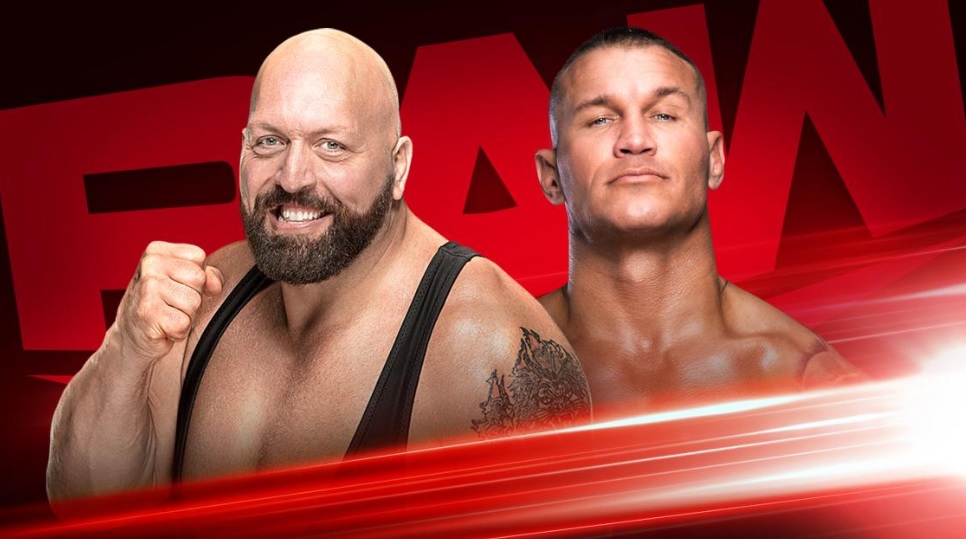 Has vomiting Seth Rollins become a meme yet? If not, people of the internet, please do your duty. After one of the weirder PPVs in recent memory left more indelible impressions for people throwing up than anything that happened in the ring, it’s back to business as semi-usual tonight on Raw. Or perhaps not, because one of the featured matches is Randy Orton against Big Show in an unsanctioned bout. In the words of Young Lando, you might want to buckle up, baby, as Raw hits USA.

The talent standing in as fans shower Rollins with boos as he enters the ring with Murphy in tow. Just in case you weren’t clear on what supposedly happened at Extreme Rules, he claims Rey’s eye was out of its socket on Sunday night. Happily, the announcers say Rey’s optic nerve is fine and his sight should recover. Maybe the wrestlers don’t know that yet because they chant “shame” at the Monday Night Messiah, who says the grizzly scene will stay with him forever. But he’s definitely not repentant, as he blames Mysterio for requesting the stipulation and forcing his hand. The greater good can now proceed unopposed … or perhaps not, because Aleister Black is out for a rebuttal. He’s in the mood to rectify “all of this,” peppering Murphy with kicks and throwing him over the announce table. To no surprise, Rollins flees back toward the ramp.

And we’re off and running, apparently, with the match starting during a commercial break. The tale being spun here is that Black has to fight through a damaged arm, plus beat the numbers game because Murphy has no qualms about interfering from the outside. Giving Rollins all he can handle before ultimately falling should make Black look strong, and Rollins certainly knows how to play his role without burying his foe. Sure enough, Rollins gets the win after a Stomp, but this was a fine opener.

Halfway up the ramp, Rollins sends Murphy back to beat on Black some more, and the two-on-one odds work perfectly for the heels. Rollins does even more harm to Black’s arm, ranting “When is enough, enough?” as he does it. He also echoes a question I have about where Black’s friends are. Faces with no friends are like sitting ducks in pro wrestling.

A video package reminds us that MVP simply declared himself United States Champion on Sunday, though the announce team confirms Apollo Crews remains the legitimate beltholder. After MVP and Bobby Lashley finish a conversation with Ron Simmons, R-Truth proves even he knows MVP’s belt isn’t the real deal. Alas, Truth’s strap is real, and Shelton Benjamin quickly beats him for it before joining MVP and Lashley for a walk to the ring.

They do, in fact, make it out there, where MVP mocks Crews for not being a fighting champion, as well as Ricochet and Cedric Alexander for “not getting it.” He also makes a Dumb and Dumber reference which provides fuel for Ricochet and Alexander to rightfully make fun of him. There are size jokes and I suppose a revelation that Benjamin has officially joined the Hurt Business before the faces reveal their new ally is the returning Mustafa Ali. I smell a six-man match after the break.

It could just be me, but a few more stables could freshen things up on Raw or in WWE in general since it’s been a while since they were a thing. Byron Saxton puts forth the idea that Benjamin could be motivated by feeling underutilized over the years, and that’s strangely logical by current WWE standards. Ricochet and Alexander continue to be pretty fun to watch together, and Ali fits in perfectly with them too. It’s great to see him get a hot tag sequence, which ends with him flying out of the ring to send Lashley over the announce table. The sense is that the Hurt Business needs a win here to keep their momentum going, but instead, Ali wins it for his side with a 450 Splash. Neat, didn’t see that coming.

Not everyone talks about the moments that changed their lives in some kind of supply room, but not everyone is Orton. He’s talking mostly about hitting Edge with a steel chair, along with how Edge, Christian and Big Show hate him for that even though they used to be his friends. Sounds like Randy is pumped to end Big Show’s career tonight.

One man who isn’t quite as excited about that prospect is Christian, who says he may not ever be the same after Orton and Ric Flair conspired to punk him. Samoa Joe asks whether tonight could be another trap sprung by Orton and somehow manages to do it with a straight face. Christian says he physically still does not feel good but would go through the pain again if it meant Orton gets what is coming to him. He can’t wait for Show to knock Randy’s ass out cold.

What can people expect from Bianca Belair going forward? We never quite find out as Peyton Royce and Ruby Riott both crash the proceedings. Belair seems pleased that Royce and Riott want to do battle, so that’s obviously coming up before this night is over.

In case you need a refresher of where were at with these two, Riott has run into numbers problems against the IIconics until finding some support in the form of Belair. But neither woman has anyone with them at ringside tonight, and the “crowd” has also gone pretty quiet. What transpires isn’t too exciting but it is short, and Riott wins.

Charly Caruso asks how Andrade and Angel Garza can get on the same page for their showdown with the Street Profits tonight, but Zelina Vega answers instead, questioning whether the champs are too scared to fight her clients. The Profits don’t wait to hear Andrade and Garza put their two cents in, attacking from behind. They’ll take this to the ring next.

Match 4 – The Street Profits vs. Andrade and Angel Garza

Congrats to Angelo Dawkins, who just welcomed a new child. That explains why the Profits have been absent recently and deprived me of my weekly dose of Montez Ford. That makes me cranky. The “Can they coexist?” angle is unusual for a heel duo, especially since the announce team reminds us that we don’t even know what started the beef between them, but I’m willing to see where they are going with it. Ford has the spot of the match when he changes orientation in midair to connect on his splash, and Vega looks like she’s going to cry when her men lose.

Winners: The Street Profits by pinfall

In one of the other silly moments of Extreme Rules, Bayley declared herself a referee and counted the pinfall for her friend Sasha Banks. The Boss has the belt, but it remains to be seen if she’s as legit as she claims.

Aside: After we got The Horror Show at Extreme Rules, I really want the next few to be different genres. Just imagine:

The possibilities are endless.

Vega lays into Garza and Andrade for blowing their chance at running the tag team division. This team still has some work to do.

As you’d figure, the announcers disagree about whether Banks is the real champ. Bayley wants the fans to show respect, and Banks takes the opportunity to point out that at least she fought for the belt whereas Asuka was handed the title when Becky Lynch went on maternity leave. She has something of a point there. Asuka shows up looking for her title and heads down the ramp, but Stephanie McMahon appears on the big screen to announce that Banks’ win is no good. Next week is a rematch, and Banks will lose if Bayley interferes.

Rando singles match between dueling tag teams who really now have mostly singles rivalries is a thing, I guess. This would merely be filler except I really enjoy Sane’s work and hope she isn’t leaving to return to Japan as rumors suggest. Here’s a twist: Shayna Baszler is watching backstage and tells Charly she has a vested interest in this match the way a shark has a vested interest any time it sees prey in the water. A challenger for Bayley at SummerSlam, maybe? Somewhat surprisingly, Sane steals a victory, sending Asuka into a fit of jubilation.

Drew McIntyre says he might not feel good physically after his Extreme Rules match, but it does feel good to still be champion, and he’s headed to the ring right now to talk about his future.

About that. Though McIntyre admits that Dolph Ziggler almost got him on Sunday, almost doing things is the story of Dolph’s career. The champ wants to look ahead to SummerSlam and think about his next challenger. Ziggler, though, isn’t about to let it go. He tries to convince McIntyre that there was a look of fear in Drew’s eyes at Extreme Rules, but a headbutt seems to seal the idea that this is all over. Ziggler isn’t done, saying he is willing to do anything to have another match. Name the time, place and stipulation. Props to the guy in the crowd that yells out “eye for an eye.” Also McIntyre is going to give Ziggler a taste of his own medicine, telling Dolph the stipulation right before the bell rings. Tony Stark, please tell Dolph what you think of this plan.

Let’s hear from Big Show, shall we? He’s more wistful than usual, reflecting on the good times he had with Orton and wondering if this is the end of the line for him. There’s also a tiger metaphor as Show suggests he’s even more dangerous right now.

I mean, an unsanctioned match is a bit tame after we just had eye for an eye, no? No Flair with Orton, at least to start. Instead, it’s Andrade and Garza who come out to help Orton, cheered on by a much happier Vega. The Viking Raiders quickly even the playing field, however, right before a commercial break. Show sets up for a splash from the middle rope through a table but sees Orton roll away and laugh while doing so. That look turns to one of disbelief when Show kicks out of an RKO. Chair shots, a draping DDT and another RKO follow, and Show isn’t kicking out this time. Somehow the boos sound sadder than the cheers with so few people watching, and that’s exactly what greets Orton after the bell. He cares not, of course, lining up for the punt. “I told you,” Orton says after his kick connects, calling Show “one more legend down.” Hey, it’s not like he hasn’t been calling himself the Legend Killer for years.

That’s that, and Dale will return to follow up next week. See you in seven!

Not horrible or spectacular, this Raw had its moments but was held back because what should have been its biggest matches were arguably the weakest parts. At the very least, there were the beginnings of some intrigue on several fronts for SummerSlam.