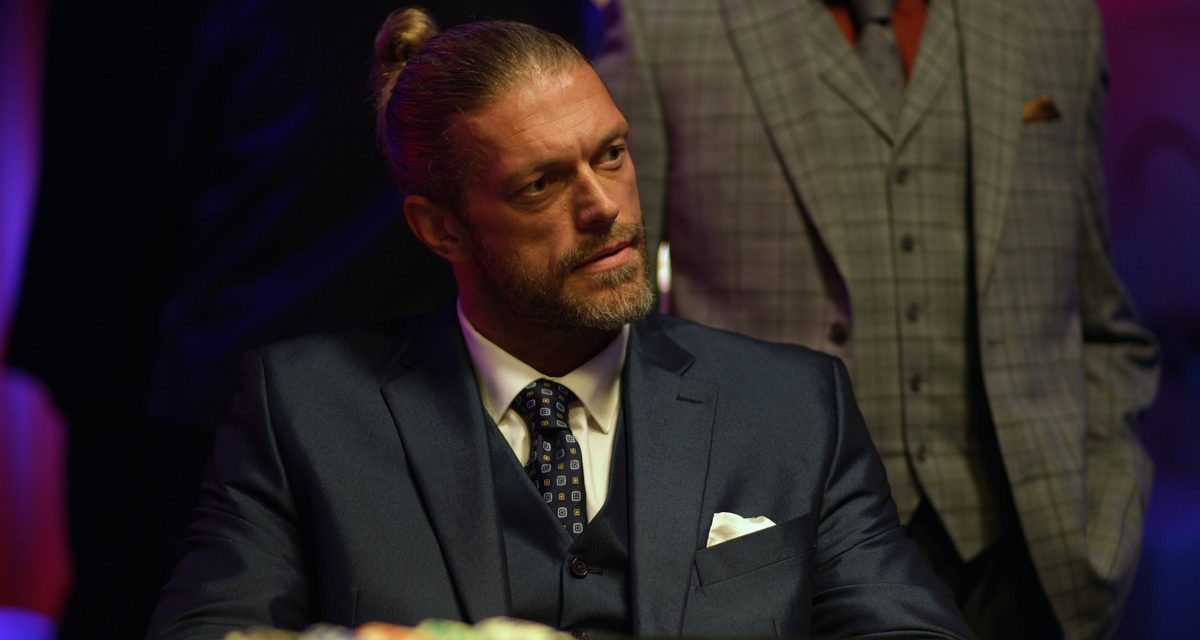 A leading role and a WrestleMania return seemed to signal a big 2020 for Adam Copeland. Unfortunately, the film is not the star-making vehicle that it originally seemed to be.

Starring as the lead character is like main eventing a show, and Copeland does his best to carry the movie on his shoulders. Of course, everyone probably did their best, but there’s not much here beyond a cool premise and the fun of seeing some good actors chew their way through some stale scenes.

Copeland plays Jack Reese, a thief that has dug himself into a very deep hole, and the “Money Plane” offers his one way out. Let me back up a bit. The film opens with Reese leading his team into a museum to relieve them of a painting. The set decoration leaves something to be desired, as the museum looks more like the main office of a start-up business. 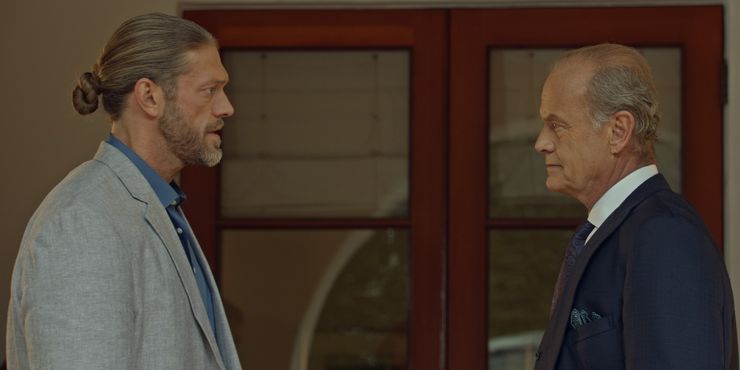 Reese has been set up, however, and after barely making an escape, he is brought to an investor (see: crime boss) codenamed The Rumble, played with gusto by Kelsey Grammar. The Rumble arranged for Reese’s safety and now expects a big favour in return.

I can only hope that, if this were a WWE Studios production, some effort would have been made for an in-joke about Copeland working with a character named The Rumble. “Do you really want to take on The Rumble?”, someone may ask him. “You know I like living on the edge”, he could reply.

Within the next few minutes, we have established that Reese must rob the Money Plane to win his freedom. Plus, he has a family on the line as The Rumble threatens their lives if Reese doesn’t comply. 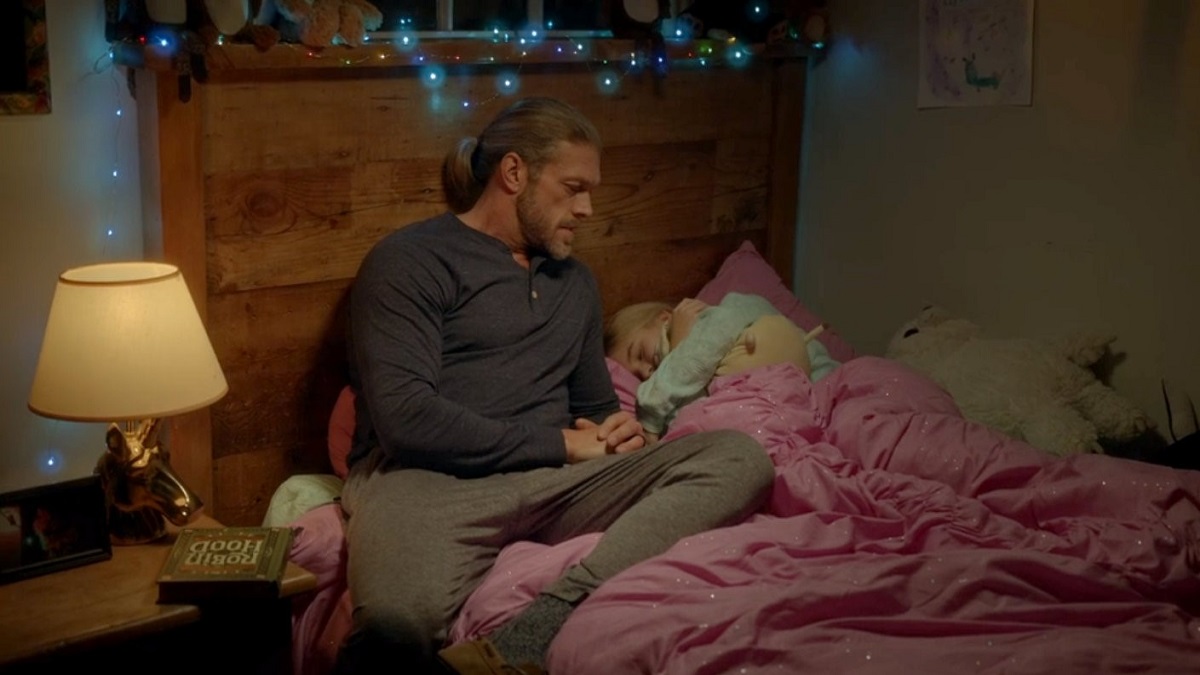 Reese in a reflective moment the night before his last job, with an interesting choice of book on the table.

Copeland actually excels in the tiniest moments of the film: at home with his daughter and wife (played by Denise Richards) and asking his friend (Thomas Jane) to check in on his family while he’s gone. When he’s not playing action hero, he’s totally believable, which is a perhaps a surprise as one might expect the action scenes to be right up his alley. In truth, though, the action and fight scenes are a weak point throughout the whole film. Something about his performance in the rest of the film is guarded and stiff, but he has some natural energy in the scenes with his family that really shines through.

On board the plane, the film has fun with the idea that it is a renowned flying casino filled with creeps and jerks of the highest order, betting on all sorts of weird things either on the plane or streaming from elsewhere. How many minutes would you bet it takes someone to die from a cobra bite, for example, which you then watch happen?

There is a pretty funny running joke as one of Reese’s crew keeps winning bets while having no idea what he’s doing. We’re also presented with another side of Thomas Jane’s character who is more than just a godfather to Reese’s daughter. For the record, Jane looks the best out of everyone in the action scenes despite what little he does, but what else would you expect from The Punisher?

As far as endings go, it suits everyone’s character and that’s the least you can expect. There are plenty more low-rent sets to come, but to a certain degree one could say that the movie really made a lot happen with some clear limitations. It certainly manages to offer some creative, gruesome fight scene moments that, if you really pay attention, are more hinted at than shown, letting the audience’s imagination do some of the work. That’s not a bad thing, either. 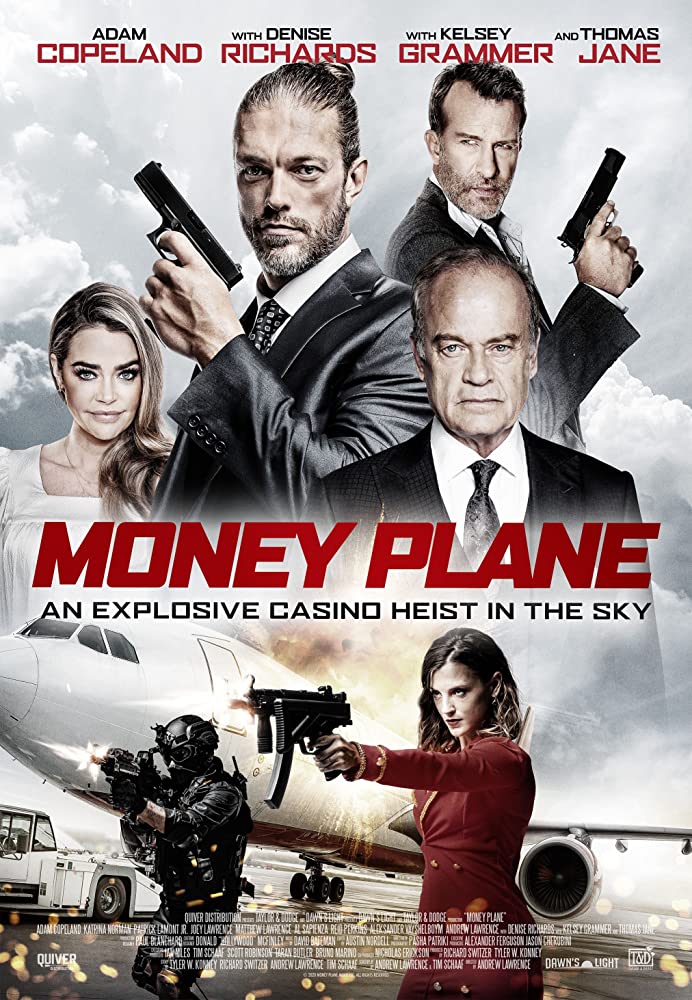 There has to be some attention given to the Lawrence brothers connection here, too. Andrew Lawrence leads the way with co-writing and directing credits, and he brings along his brothers Matthew (of Boy Meets World) and Joey (of Blossom). Grammar seems to be having the most fun of everyone (and he’s therefore the most fun to watch), but Matthew is a close second in a supporting role. Andrew also acts in a smaller role, giving him triple duty on the film.

In the end, Money Plane just isn’t enough of any one thing to be recommended with enthusiasm. The action’s not satisfying enough for fans of the genre, it has funny moments but not enough if you want a laugh, it’s not suspenseful enough to be a thriller, and, sadly, it doesn’t even have enough camp to be fun in spite of itself.

Money Plane is now available for On Demand streaming

Edge adapting nicely to a variety of roles

Edge to star in action film