Bobby Fulton calls it a career 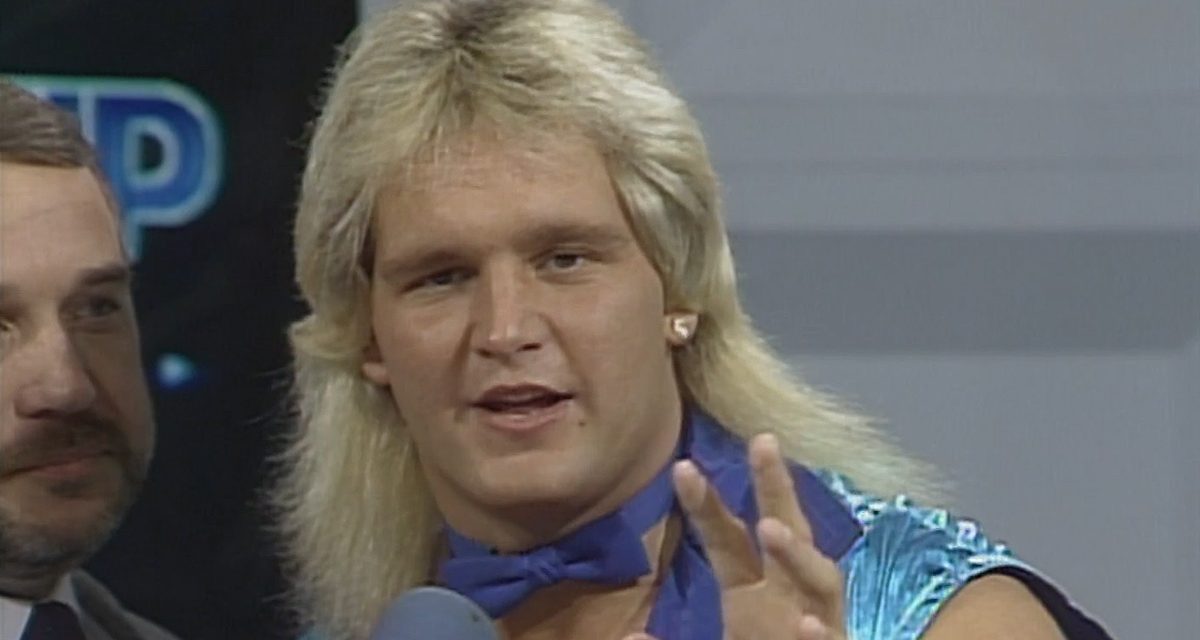 Bobby Fulton has officially announced his retirement from pro wrestling.

“Today is the anniversary of my friend Bruiser Brody’s death. The other day my son’s pastor announced he was gonna retire. The other day, I looked at a photo of my son and I last year at Tecumseh when I was healthy. Today, I announce I am retired from professional wrestling. I’m no longer going to do independent events. There’s been a lot of contributing factors. Thank you to all for the support over the years, who knows I may drop in to see some old friends one day. I appreciate you all for the support over the years. Thank you!” he wrote.

Fans were quick to send along their praise to the veteran.

“Thank you for performing for us fans and giving your life to this business,” wrote Michael David Hill.

“Take care of yourself legend, thanks for all you’ve done for the business. I hope it was as good to you as you were to it,” wrote Joel Callaway.

“Thank you for all the memories Bobby. Enjoy retirement, you’ve earned it!” wrote Ryan James.

On May 26, 2018 , Fulton wrestled his final match. Steven Johnson reported on the event for Slam Wrestling with the story below.

The wrestling boots had served Bobby Fulton well. In the last 41 years, Fulton’s boots and their predecessors traveled the world, were caked in blood, danced on canvases in arenas big and small, carefully negotiated a barbed wire cage, and landed dropkicks to the faces of wrestling’s greatest names.

So it was time to give the boots a well-deserved rest. Their owner laid on his back in the ring as his sons helped him remove them after his final match. And since Fulton quickly gifted them to a longtime fan, neither he nor the boots have any comebacks left.

“It’s time, it’s time. Everything in this wrestling business is timing,” Fulton said as he wrapped up his career at a Saturday, May 26 show at the Pickaway Fairgrounds Coliseum in Circleville, Ohio. “I love wrestling and the best way for me to honor it and respect it is to step aside when the time is right.”

The native of nearby Chillicothe turned his retirement match into a retirement day with a fan festival, a training seminar for aspiring wrestlers, and a spirited one-on-one conversation in the ring with old nemesis Jim Cornette, who managed the Midnight Express against the Fantastics tag team of Fulton and Tommy Rogers.

“We’ve known each other for 37 years,” Cornette said. “And in those 37 years, Bobby Fulton, you have hit me over the head with a chair, you have punched me in the face, you have shoved my face into a cake and you have even set my pants on fire. But through all of that, I am very proud to say you have been my friend and you will always be my friend.”

Fulton’s final match ended with a twist. He was scheduled to lock up with Nick “Kid” Curry, the youngest son of “Flying” Fred Curry, who helped Fulton get booked on cards in southern Ohio when he was just 17.

Fulton and the Kid went at it scientifically for about nine minutes, with Curry showing the same height on his dropkicks as his famous dad.

At that point, “Pitbull” Gary Wolf and Robby Starr came to taunt the wrestlers and challenge them to a tag match. Curry used a flying cross-body block to pin Wolf, who has been feuding with Fulton on recent shows in Circleville. For the next half-hour, Fulton gladhanded fans and well-wishers on his final march to the dressing room. 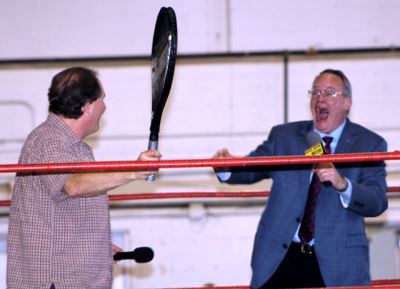 Jim Cornette shies away from Bobby Fulton and a tennis racket. Photo by Steven Johnson

“If you have a dream — I don’t care if you’re five, six, seven, 21, 41, 61 — if you have a dream, your dream can come true if you work hard enough to pursue it,” he said. “I thank God for blessing me with the greatest career to travel the world, to get a chance to meet some of the greatest people in the world.”

Fulton got into wrestling in June 1977 when he was 16, looking nothing like the beloved babyface he’d become. He hooked up with an independent group in southern Ohio run by wrestler-promoter Hank Vest that featured J.D. “Killer” Kent and Vest’s son Roger, an early Fulton opponent. The payoff for his first match — five bucks.

After about five years of streamlining his body and perfecting his babyface moves, Fulton formed a short-lived tag team called the Fantastic Ones with Terry Taylor, a duo modeled on the teenybopper teams that were a rage in the 1980s. From there, he joined Rogers in the Fantastics through the Mid-South, World Championship Wrestling, and Smoky Mountain Wrestling promotions.

“We went further together than we would have by ourselves,” said Fulton, since each was only about 5-9 and 200 pounds. “But we loved the blood and guts of professional wrestling.”

The brawls between the Midnights and the Fantastics are considered classics, but Cornette and Fulton revealed at their give-and-take session in Circleville that the backstage antics were just as rollicking.

Cornette was tending to matters one night in a bathroom in an old arena in Washington, D.C., when Fulton wadded up some paper, lit it, and tossed it under the side of his stall. “I’m wearing polyester pants and that shit melts,” Cornette said. “I look down and my pants are melting, they’re dripping into wax.”

When Cornette discarded the pants, Fulton grabbed them and took them to the ring despite Rogers’ pleas. “Tommy Rogers said, ‘You know Jimmy’s going to get the best of us. Please don’t take them pants out to the ring,’ ” Fulton recounted. Sure enough, Cornette said he shot back to the fans in Washington: “Bobby Fulton, that’s proof you always wanted to get in my pants.”

After retelling that yarn, Fulton and Cornette broke into a duet of the Archie Bunker standard “Those Were the Days” that brought down the house. Cornette later presented a commemorative plaque to Fulton, accompanied by sons Dillon and Jarron, as his wrestling friends Bobby Eaton, Fred Curry, J.J. Dillon, and Roger Vest stood at ringside.

Also during the retirement show, Fulton inducted Fred Curry and his father “Wild” Bull Curry into the Ohio Pro Wrestling Hall of Fame.

Fulton has been winding down his in-ring activity in the last few months, wrestling mostly on his own cards. He had a stroke in one eye in 2014 and said his shoulders are barking at him, though a recent feud with Shane Douglas — also in Circleville — ended uncommonly well. 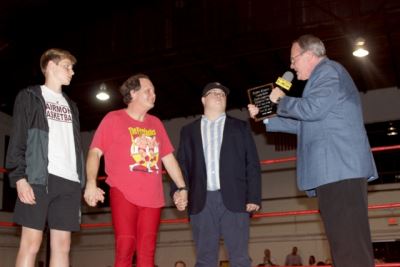 Bobby Fulton, with his sons Dillon and Jarron, as Jim Cornette presents Bobby with an award. Photo by Steven Johnson

Douglas suplexed him on a table last August. When the table failed to break, Fulton looked like a crash test dummy. “I heard everything crack from my head to my ankles so I laid in the dressing room for about an hour and I was scared to death,” Fulton said.

Incredibly, the bump fixed a longstanding issue that’s prevented Fulton from fully turning his neck for years. “I woke up the next morning. Guess what I can do now? I can turn my neck really good. It totally adjusted after 20 years. It was amazing. … So when you get a good break like that, then you know it’s time to hang ’em up.”

Fulton plans to continue to promote under the banner of James Hines Family Promotions, continuing something his father started four decades ago. He’ll be doing it at a different venue though, as the coliseum in Circleville will be torn down in favor of a modern, air-conditioned structure.

“It’s unbelievable how much history they have in that building,” Fulton said. “I began running shows there in 1990 and I’ve been doing it again. It’s a good way to end it.”