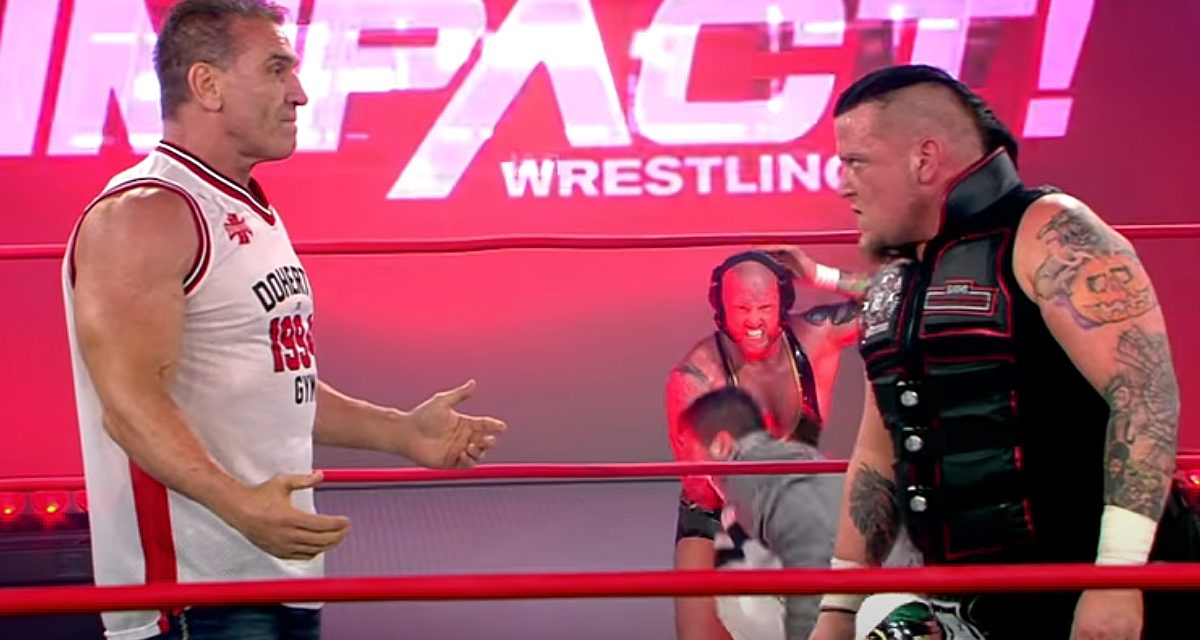 We are on tape from the Skyway Studios in Nashville, Tenn. Josh Mathews and Madison Rayne have the call for this week.

Trey Miguel sneaks up behind Wentz and scares him, but the team all bump fists before The Rascalz have their tag team title match against The North.

Rosemary and Susie start off and Rosemary yells at Susie about their history. Rosemary works Susie into the corner, but misses a splash. Susie with forearms in return and nearfalls on Rosemary. Rosemary slaps her and celebrates with Valkyrie, bringing in Kylie Rae. Double-team offense on Rosemary brings in Valkyrie. Kylie offers a handshake and Valkyrie slaps it away. Valkyrie headscissors, but she gets the bottom rope as Kylie goes for an STF. Double bulldog on Valkyrie gets Susie a nearfall. Rosemary attacks as Bravo causes a distraction and Valkyrie works Susie down. Susie worked over by Rosemary and Valkyrie. Kylie Rae gets the hot tag against Rosemary and works the comeback for her team. Corner cannonball nearfall for Kylie. Stunner from Kylie lands on Rosemary, but she sits back up. Superkick from Kylie brings in Valkyrie for a spear nearfall. Things break down and Kylie left to get the Smile to the Finish STF on Valkyrie.

Winners by submission: Kylie Rae & Susie, 2.5 out of 5 stars

Solid opener with good character work and callbacks between Rosemary and Susie. The Valkyrie, Rosemary, and Bravo triangle continues and it has been one of the more fun secondary feuds in recent memory for the company.

The announce team previews tonight’s show as we go to break.

Johnny Swinger tells Chris Bey that he has a plan for them tonight.

The Deaners vs. Reno Scum vs. XXXL vs. TJP & Fallah Bahh

TJP and Bahh storm the ring and start a brawl between all four teams to start. XXXL hit Cody Deaner with a Compactor as the only ones left in the ring, but they get dragged out. Cousin Jake takes out the field with a dive over the top as we break.

Reno Scum work Cody Deaner into their corner as we return. XXXL steal tags on Reno Scum to come in and work Cody down. Cody with a neckbreaker on Acey Romero. Larry D comes in with clotheslines and everything breaks down. Reno Scum left with Romero and Cody down in the ring. Reno Scum hold the ring, but get drawn out and brawl TJP & Bahh to the backstage area.

XXXL and The Deaners left. Larry D with clotheslines and a spinebuster on Cousin Jake. Cody comes in with a Deaner DDT attempt. Romero Pounces Cody out of the ring. Larry D and Cousin Jake left. Cousin Jake catches Larry D coming in with a side slam.

Things really picked up here in the last stretch with The Deaners and XXXL. For a nothing match between teams mostly comprised of brawlers, they kept the pace going and made it just about as interesting as it could get. Decent, though forgettable.

Johnny Swinger goes through bags backstage for a masked outfit. Swinger puts down Super Eric ring gear and settles for Suicide’s mask before walking off.

Impact Plus Flashback Moment of the Week recaps The Beautiful People defeating Angelina Love & Tara at TNA Lockdown 2010 before commercials.

Ken Shamrock catches up with Sami Callihan backstage. Shamrock doesn’t know why Callihan helped him, but they have a chance to do something special by ending Impact World Tag Team Champions The North at Slammiversary. Shamrock says if Callihan needs him tonight against Josh Alexander, he’ll be there.

Callihan says of course he won’t need Shamrock. Callihan doesn’t know why he helped Shamrock, but maybe when he looks at them, he sees “The World’s Most Dangerous Tag Team.” Shamrock likes that. Callihan says it is like the old story of the scorpion and the frog and he says bye as he beams out with his cell phone.

Lee offers a test of strength and reaches high over Grace. Grace powers Lee down and presses for a series of nearfalls. Lee ducks under the ropes as Grace looks for the Grace Driver. Lee bites the hand with the referee out of view to force the break. Grace works Lee into the corners with Irish whips and a spinebuster nearfall follows. Lee with an enzugiri out of the corner and she chokes the Impact Knockouts Champion on the bottom rope. Lee with bodyscissors for a submission and pin attempts on Grace. Grace comes back with a suplex and she rallies. Lee comes back with a three kick combo and punctuates with an enzuigiri. Lee up top and a Swanton Bomb gets a nearfall. Lee gets the Crown Jewels brass knuckles out. Grace blocks and traps the wrist to get the Grace Driver.

Winner by pinfall: Jordynne Grace, 2.75 out of 5 stars

Good match between these two where Lee continues to build her status while looking competitive in any match she is in. Grace continues to look like the powerful champion she is and her finisher remains one of the most protected moves in the company.

Post-match, Deonna Purrazzo’s music hits, but she shows up on the screen. Purrazzo asks if Grace really thought she would show up and says Grace will have to wait until Slammiversary.

Video package previews the Four-Way match main event for the vacated Impact World Heavyweight Championship at Slammiversary, with profiles of Eddie Edwards, Ace Austin, and Trey Miguel and their addressing the mystery opponent.

Johnny Swinger as Suicide catches up with Impact X Division Champion Willie Mack. Mack asks about their secret handshake and he asks about Swinger and Chris Bey attacking Suicide last week. Mack pretends to not know Swinger’s name and asks about the “old, creepy guy.” Swinger turns his head and lifts his mask to say Swinger and that he is not that old. Mack thanks him and remembers he owed Suicide a title shot, which he gives him tonight.

Madison Rayne interviews herself for Locker Room Talk and announces she will return to the ring at Slammiversary to compete in the Knockouts Contenders Gauntlet match to take back her thrown as the “Queen Bee of the Knockouts.”

Kiera Hogan & Tasha Steelz interrupt and are followed by Havok & Nevaeh, which erupts into a brawl between the two teams as Rayne has to drop to the floor camera to sign off the show.

Hernandez arm wrestles for money backstage. Rhino comes in and they lock up, where it says it will be continued.

Suicide shakes hands and hits a slow spinning back kick. Suicide tries to do the Suicide Spiderman in the ropes and falls to the mat. Dropkick from Mack lands and he goes for the mask. “Swingicide” rakes the eyes and struggles to lock in an octopus.  “Swingicide” looks for the Swinging Neckbreaker, but pulls off to not reveal his identity. Mack hits the Stunner.

Swinger has really found his sweet spot in this manager/partner role and this was probably the funniest of his matches so far.

Tommy Dreamer with Gia Miller and he reads a sarcastic apology to “Self-Proclaimed” TNA World Heavyweight Champion Moose. Moose says he doesn’t think the apology was sincere enough and he thinks Dreamer is making this a joke. Dreamer says he just got off a call with the TNA Championship Committee and they named him number one contender. Moose says there is no committee and Dreamer says they will fight at Slammiversary in Old School Rules. Moose says all he had to do was ask instead of making up a committee. Moose calls Dreamer stupid after Dreamer says there is no TNA.

The announce team runs down the Slammiversary card:

Callihan stomps Alexander down in the corner as we return. Alexander trips Callihan up and drags him outside. Callihan lands a Death Valley Driver on the floor. Page gets in Callihan’s face. Page’s distraction allows Alexander to drop Callihan and look for the countout. Callihan beats the count with a second to spare and Alexander goes to work on grounding Callihan. Alexander with a rolling clothesline, but he runs into a clothesline from Callihan. Callihan with a brainbuster variation for a nearfall. Mounted punches in the corner see Alexander duck out and Callihan punches the turnbuckle. Blue Thunder Bomb nearfall for Alexander and the Ankle Lock applied on Callihan. They fight to the apron and Callihan rakes the eyes. Apron piledriver lands and gets Callihan a nearfall.

Page comes in and hits the referee as he makes a count. Ken Shamrock runs out and grabs Page in an Ankle Lock. Page taps and gets dragged to the floor in the submission by Shamrock. Callihan with a low blow and Piledriver on Alexander.

Winner by pinfall: Sami Callihan, 3 out of 5 stars

An underwhelming, but solid main event with a finish to tease Slammiversary. In a sense, a good play not to give away too much here before the pay-per-view.

The show closes with a Slammiversary video package promising that a former champion will appear, but he won’t be alone. Three shot glasses are grabbed by three hands to end the video.

While we are running out of interesting in-ring offerings on the road to Slammiversary, some of the backstage hype and video packages did a good job of selling the event.