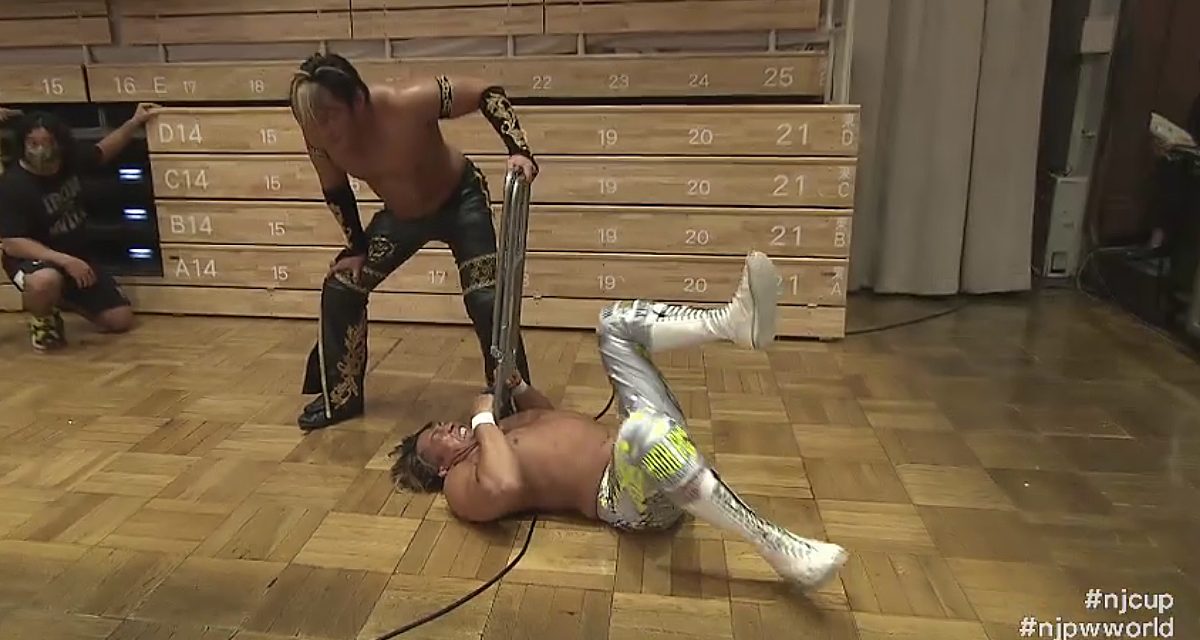 NJPW’s Ace, Hiroshi Tanahashi fought a losing battle on Night 3 of the NJPW Cup. While he was scheduled to take on Suzuki-gun’s Taichi, he ended up fighting a two-on-one match against Taichi and Douki instead.

Right off the bat, Taichi was up to his old tricks. He attacks Tanahashi from behind as he is posing for the cameras in a corner. Tanahashi hadn’t even gotten his gear off. Taichi powerbombs Tanahashi, gear and all to the canvass. Taichi smirks as the official checks on Tanahashi to see if he can even continue.

Young Lions join Red Shoes in assessing Tanahashi’s medical condition. Taichi throws the Young Lions out of the ring, grabs Red Shoes by the back of his shirt. Tanahashi continues to lay on the mat grimacing in pain. Even though he still has his gear on, Tanahashi signals that he wishes to continue. Taichi buzzsaw kicks him in the head. Taichi rolls Tanahashi out of the ring like a sack of laundry. 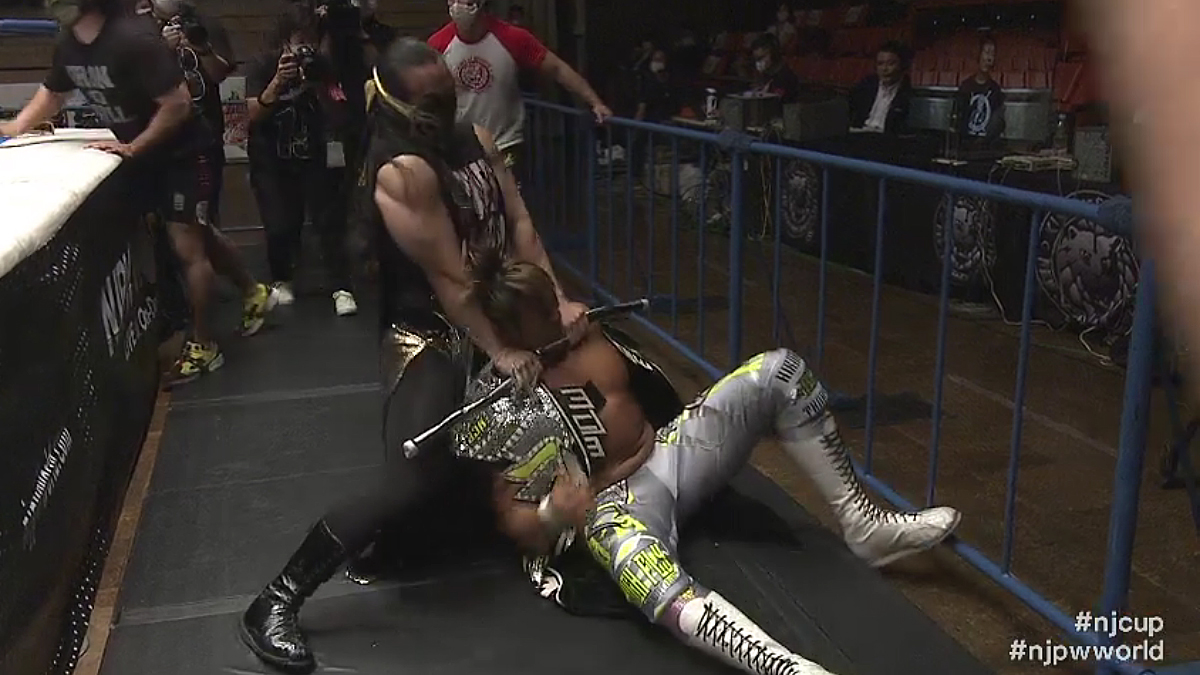 Douki is waiting outside. He chokes out and beats Tanahashi with his metal pipe as Taichi distracts Red Shoes. Red Shoes gives Douki a tongue lashing. This gives Taichi time to strangle Tanahashi with a television cable. Tanahashi is just a mess. Taichi covers him. Red Shoes refuses to count telling Taichi to fight on.

Taichi chokes Tanahashi over the ropes breaking as per the official’s count. Tanahashi fights back with some haymakers to the stomach. Taichi easily takes him down to the mat again. Tanahashi turns things around on the floor. He whips Taichi into the ringside barricade but when he turns his attention to Douki, Taichi attacks. Red Shoes warns Douki again not to interfere. Taichi rams Tanahashi into some bleachers and hits him in the stomach and throat with a steel chair. On the way back to the ring, Taichi smashes Tanahashi’s head off a steel post too.

The Young Lions actually start cheering for Tanahashi. Tanahashi “Hulks up”, no selling Taichi’s blows. A flying forearm puts Tanahashi back into the thick of things. He demolishes Taichi with forearms and a splash from the top rope. Tanahashi misses a Stinger Splash taking a jumping high kick to the back of the head.

Another high kick later on has Tanahashi stunned on the mat. Taichi readies for the final blow and victory. Black Mephisto from Taichi pins The Ace.

No surprise. The evil Suzuki-gun attacks before the bell even rings. Nagata and Suzuki square off on the floor. I am really liking this feud and that Nagata is once again in the spotlight in NJPW. At times there is more fighting on the floor than in the ring with Suzuki choking out Nagata with a microphone cable and Douki doing the same to Uemura with his steel pipe. El Desperado pins Tsuji with Pinche Loco. 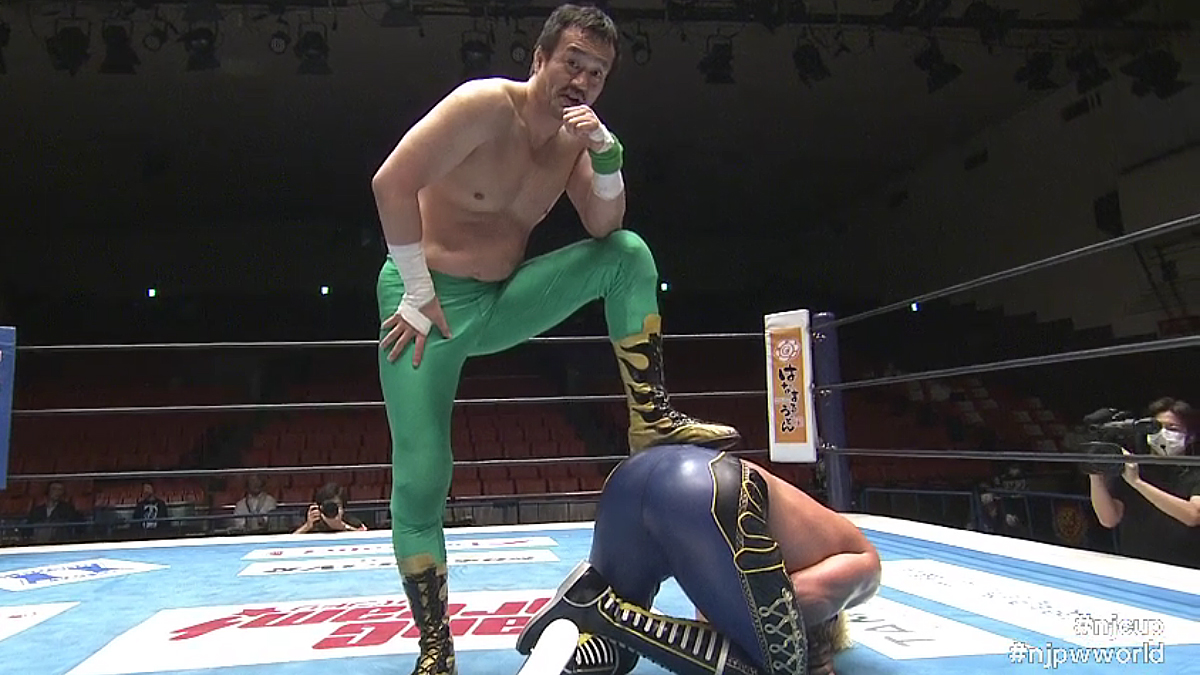 Ryusuke Taguchi has some fun with Sanada. Courtesy: NJPW.

Coming to the ring, Taguchi is deadly serious. No goofing or clowning around. Taguchi does offer to bump fists with Sanada. Sanada just stares him down. It is counter for counter, hold for hold in a very technical match. Sanada applauds Taguchi when they each go for a drop kick. He extends his hands in a fist bump. They bump…but then try to kick each other in the stomach. Taguchi rolls Sanada up into the Paradise Lock and stands over him gloating. The hold isn’t as tight as Taguchi thinks it is. Sanada escapes and works Taguchi into a Paradise Lock, drop kicking him out of it. Sandra attempts to neutralize Taguchi’s Funky Weapon by giving him atomic drop after atomic drop. Sanada reverses a Funky Weapon into German Suplex with a bridging pin.

A battle of the NJPW powerhouses with lots of stiff clotheslines and forearm smashes. Sho scores a very impressive and monumental win of his career by taking all Shingo had to offer. A piledriver and a Shock Arrow pins a stunned Shingo. The announcers go mental over the underdog win. Sho is pretty emotional after the victory while Shingo is dejected questioning the official’s count. These two have to meet again after that match. 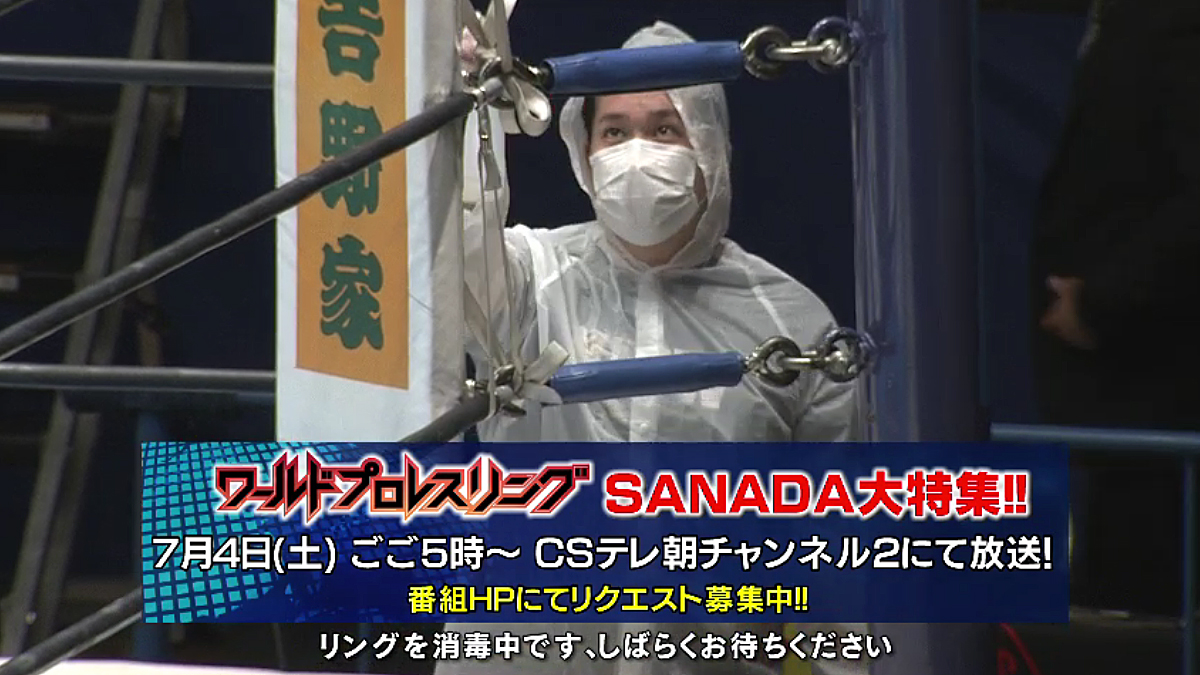 NJPW staff disinfect the ring during a break in the action. Courtesy: NJPW.

Whether you like really good technical matches or full-on brawls, Night Three had something for everyone.