Smackdown: The Mega Monsters team up

Smackdown gave closure to the most shocking moment at Money in the Bank. It wasn’t two people plummeting off of WWE Headquarters…it was Otis winning the briefcase. No, that wasn’t just a fever dream.

Plus, Sami Zayn was previously stripped of the Intercontinental Championship calling for a star-studded tournament: Elias vs King Corbin, Daniel Bryan vs Drew Gulak, Sheamus vs Jeff Hardy, and AJ Styles vs Shinsuke Nakamura. The tournament’s first round kicked off on the 05/15/20 edition of Smackdown.

The man of the hour, Otis enters with his green briefcase in hand. Otis sits down with Miz and Morrison on tonight’s Miz TV — well he stands after the chair breaks under his weight. The hosts present a slideshow of Otis’s childhood where it’s clear he was always a thick individual. Miz knocks on Otis’s size and takes shots at his early learning disability. It was a cheap heat line that got Miz heated himself. Miz begins to discourage the big man’s victory and demands a tag team match with him. Partner Tucker Knight, who got “dysentery from the Oregon Trail” couldn’t make it leaving Otis to find himself a mystery man.

The bad blood between the two leads to some early tussling and strikes. Corbin gets the upper hand and works down his opponent with various holds. Elias escapes, sending Corbin over the top rope with a lariat. He dives off the top to the outside but couldn’t take advantage. The King gets a hold up Elias’s guitar, mocking him in front of Cole and Graves. But an enraged Elias whips Corbin around the ringside area before commercial break.

Elias attempts to go old school, but King Corbin pushes him off balance. The latter has complete control now and buries his opponents with fists. He goes for a clothesline but is countered by a swinging neckbreaker. Elias hits a rolling cutter and goes for a top rope dive but misses. They trade reversals until Corbin gets the guitar once again, smashing it against the ring post. But Elias delivers a jumping knee, rolls Corbin up, and earns the victory.

Otis is backstage searching for a teammate. He runs into Sheamus and asks for his partnership to which he responds, “Not a chance…fella.” Mandy Rose advises her boyfriend to ask Universal Champion Braun Strowman for help. The champ questions Otis’s motives and wonders if he just wants to cash in. But Strowman respects the gall and says “I’ll think about it.”

Naomi has the early advantage, but Brooke eventually counters. She hits a handspring back elbow in the corner and tries a second time. But Naomi gets her knees up and heads to the top. She dives onto her opponent and they have a series of roll-throughs until Dana Brooke gets the surprise pinfall victory. Naomi’s quick loss visibly frustrates her.

“The Brand to Brand Invitational” (not to be confused with the Superstar Shakeup) brings NXT Women’s Champion Charlotte to Smackdown. Charlotte files through her favorite lines of “My last name is Flair” and others until Smackdown Women’s Champion Bayley and Sasha Banks interrupt. Bayley tells Charlotte to head back to NXT or RAW because this is her show. Instead of retaliating, Charlotte lets Banks know that she’s being held back by being with Bayley. This leads to a challenge to Charlotte for a match tonight with Bayley. Charlotte ends with the line, “Are you your own woman? Or are you just going to be Bayley’s lackey and happy being an afterthought?”

The Forgotten Sons are backstage and reminisce about returning from duty. Ryker explains that they were cast away and labeled mentally unstable. They weren’t welcomed home, so they’re going to “…welcome you with closed fists.”

Renee Young asks Miz and Morrison about Strowman being Otis’s partner. But they aren’t concerned because “Not even Braun Strowman is dumb enough to fall for Otis’s plan…to cash in the Money in the Bank contract.” “Hey Hey! Ho Ho! Miz and Morrison!”

The two technical wizards and training partners shake hands to start the bout. Bryan and Gulak roll around and wrestle through some impressive chain situations until the latter hits the “Gulock”. They lock up again and this time Bryan catches an armbar. The competitors hit continuous standing switches until Gulak picks his opponent up and off to the floor.

Back from commercial, Gulak has the control. But Bryan hits the shinbreaker, dragon screw, and targets the left leg. Gulak is able to power up and deliver a vicious slam that Bryan counters with an even more malicious German. The Gulock is applied once again, but Bryan continues to attack the injured leg and foot. Bryan gets his opponent in a knee bar which forces the submission win.

Daniel Bryan is interviewed by Renee Young and gives a heartfelt promo about the Intercontinental Championship. He wants it to “…represent the absolute greatest wrestler in WWE. And I think that that’s me.” Bryan and Gulak embrace after their technical masterpiece.

Sonya Deville and Dolph Ziggler are backstage, and she bashes their opponents for next week, Mandy Rose and Otis. Deville mocks Rose for hooking up with Otis, and she vows to ruin her life. 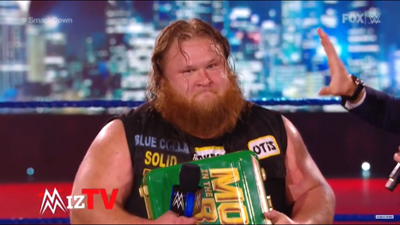 Strowman teams with Otis? Perhaps Otis was Shawn Michaels and Tucker was Marty Jannetty after all. Photo: WWE.

Miz and Morrison vs Otis and Braun Strowman

To Miz and Morrison’s dismay, Braun Strowman accepts the offer. The Mega Monsters are born! Otis and Morrison start off and the former overpowers his opponent. Otis tags in Stroman and the big men pull off simultaneous “Caterpillars”, followed by double elbows. Morrison retreats to the outside before the break.

During the break, The Miz gives Otis an eye-poke and capitalizes. He works down Mr. Money in the Bank and tags in Morrison. They attempt the double suplex, but Otis reverses with a double suplex of his own. Strowman receives the hot tag and freight trains the Miz on the outside. He goes for the shoulder attack in the corner, but Morrison saves Miz while Strowman crashes into the post. Morrison runs the ropes to hit a maneuver that is ultimately countered by Strowman’s finishing powerslam.

Mandy Rose’s music hits and Strowman turns his back on Otis. Mr. Money in the Bank looks to jump the champion but gets caught. Otis insists, “I’m just kidding. Just for a laugh, for a little laugh”, as he extends a fist. Strowman accepts. Otis, Rose, and Strowman close the show in victory.