Portraying Hawk is quite a rush for Ontario’s Rob Rage 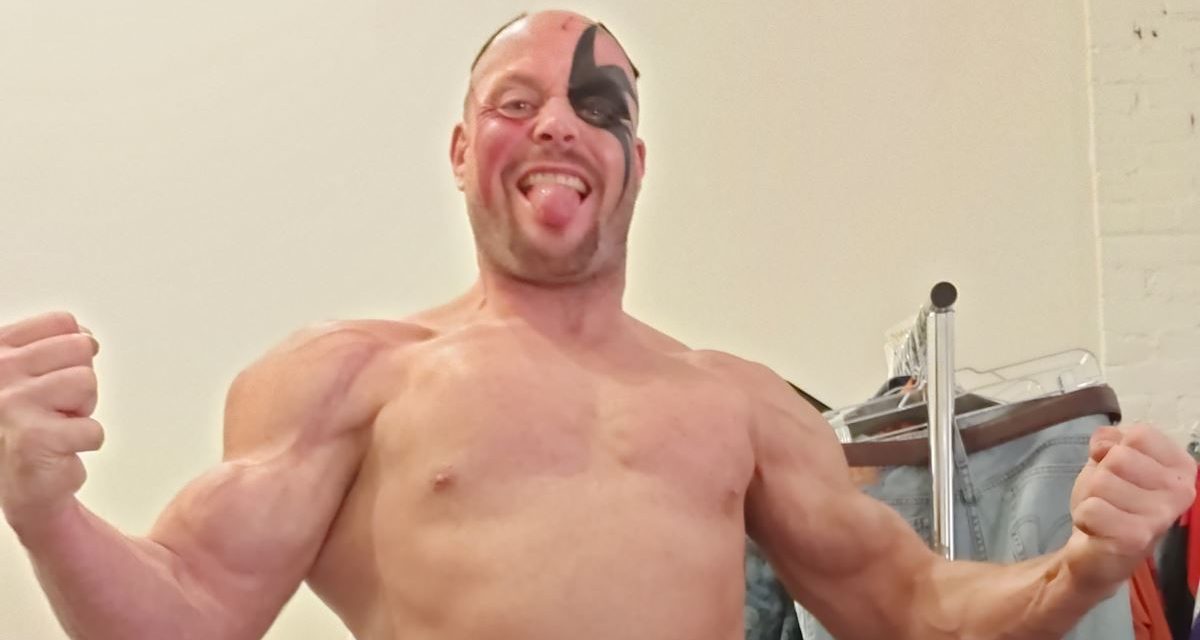 Young wrestling fans often dream of being in the ring. Sometimes in those dreams, they actually see themselves as their favourite wrestler, donning their boots and tights, and imagining reliving their hero’s greatest matches. For Ontario-based wrestler Rob Rage, his dreams have become reality, thanks to his participation in the Vice wrestling documentary series, Dark Side of the Ring, including in this week’s episode.

Rage (real name Rob Thomson) will be portraying Road Warrior Hawk (Mike Hegstrand) in the episode centred around one of the greatest tag teams of all time, the Road Warriors. Thomson will be featured during the re-enactments of events that is a key storytelling element used in the series.

“I loved the Road Warriors a lot,” he told SLAM! Wrestling. “The make-up, the spikes… they were just so bad-ass.”

Thomas’ admiration for Hawk, and his partner Animal (Joe Laurinaitis) started when Thomas was a kid.

“A neighbour of mine had illegal cable, so every Saturday night, we’d watch NWA wrestling. I was a huge fan of their show, I just loved the grainy feel of old-time wrestling, with the cigarette-smoke filled crowds. I loved WWF too, my mom would take me to Maple Leaf Gardens to see shows there. So on Saturday, we’d watch NWA, then Maple Leaf Wrestling, and that would lead right into Hockey Night in Canada; it was a Canadian boy’s dream.”

He didn’t know it then, but years later, he would actually compete with many of the stars he grew up watching. Though the journey took him some time — two decades plus, in fact.

“My background was in football,” he explained, “I played football at York University (where he graduated with a double major in Kinesiology and History.” (He’s quick to joke, “I’m a meathead, but an educated one.” He got tryouts with the Hamilton Ti-Cats and Ottawa Renegades, and then went to Europe to play in pro football leagues.

“I was progressing in body-building, and in 2011, I qualified in the Nationals, but I didn’t do as well as I wanted to. I had several friends who were wrestlers, including (fellow Ontario-based star) Flesh Gordon, and I’d seen a bunch of his shows. He’d been telling me that I should get into it, but I was holding off. After the Nationals, I was sitting on the stage, and I thought to myself, ‘That’s it, I’m going to start.’ I did a little bit of training with Flesh, and then he hooked me up with trainer Rob Fuego.”

Because of Thomson’s size, Fuego (Rob Etcheverria) trained him a little differently than he did many of the other, smaller trainees.

“[Fuego’s] specialty is the lucha style — he’s really famous for that. With me, I’m really grateful that he spent a lot of time, teaching me the fundamentals, and how to wrestle ‘big-man’ style. Some of it, I took to pretty easily — the wrestling moves, the agility. It took some time to get used to taking bumps,” he recalled. “I’d done training camps and football games, and I didn’t think there could be anything worse than that. But taking bump after bump after bump, your body gets really beaten up.”

His size and physique made Rage a rather unique presence in many of the companies where he was booked, and that, along with his character and mic skills, help him catch the attention of several promoters.

“(My style) is old-school big man heel, (along the lines of) Jesse ‘The Body’ Ventura and ‘Superstar’ Billy Graham. I’m pretty good at antagonizing people on the mic too. With that and my old-school look and moves, it’s great, because when I’m in the ring with someone who is smaller and can do the really fast, really athletic moves, it’s a good mix of styles.”

It was his relationship with one of those promoters, Toronto’s Kris Chambers of Superkick’d, that helped him land his first episode of Dark Side.

“Superkick’d is just down the road from the Vice offices in Toronto,” Thomson explained. “Chambers recommended me, and they originally planned for me to star as Lex Luger in the (episode centred around) Randy Savage and Elizabeth. I went in and met them — the guys who produce the shows are huge wrestling fans — and after I met them, they must have liked my personality, because they said I wasn’t going to play Luger, but instead I was going to play Hulk Hogan, which was great.”

As Hogan, Rage has appeared in a few episodes, including those profiling “Dr. D” David Schultz, and the murder of Dino Bravo. When the opportunity to portray Hawk in the newest episode came up, Rage’s size and build made him an easy choice.

“It was really cool,” he said, about the three days he was on set. “When we (film the episodes), we get to see the unedited interviews and footage. We see all of those so that we know what they want us to do (in the re-enactment), and how they want us to portray it. There’s a hilarious story that Animal told about one night when Vince McMahon took the boys to a strip club, and took everyone’s finishing moves, including the Doomsday Device.”

The story covers all aspects of the careers of the Warriors, from their background story, how they got together as a team, their early days in Georgia Championship Wrestling, all the way through to the end of the team. As the series title implies, the episode doesn’t shy away from the dark parts of Hegstrand’s life, including his drug addictions that hampered his career in his later years.

“There’s a big emphasis on that,” he confirmed, “because that had a huge impact. A lot of people don’t know some of those stories, like how he disappeared for a few weeks after SummerSlam in England, and got fired for that. Or the health problems he had as a result of the drugs and the lifestyle. There’s so much to tell, it was hard for them to have to leave things out.”

It’s also Thomson’s opportunity to pay tribute to Hawk, one of his favourite wrestlers — and this time, without the fear of offending the surviving member of the team, like had happened once before.

“At a TigerFest show (a Canada Day card put on for the city of Brampton by the legendary Tiger Jeet Singh and Tiger Jeet Singh Jr.), I came out as ‘Road Warrior’ Rage, complete with make-up. One of the photographers put up a picture of me, and tagged Animal on the post. Animal was quite upset about it, and messaged me on Facebook. I told him I didn’t mean any disrespect by it, and offered not to do it again. When he came to Comic-con some time later, I met him there, and we (cleared the air). Everything is good between us.” 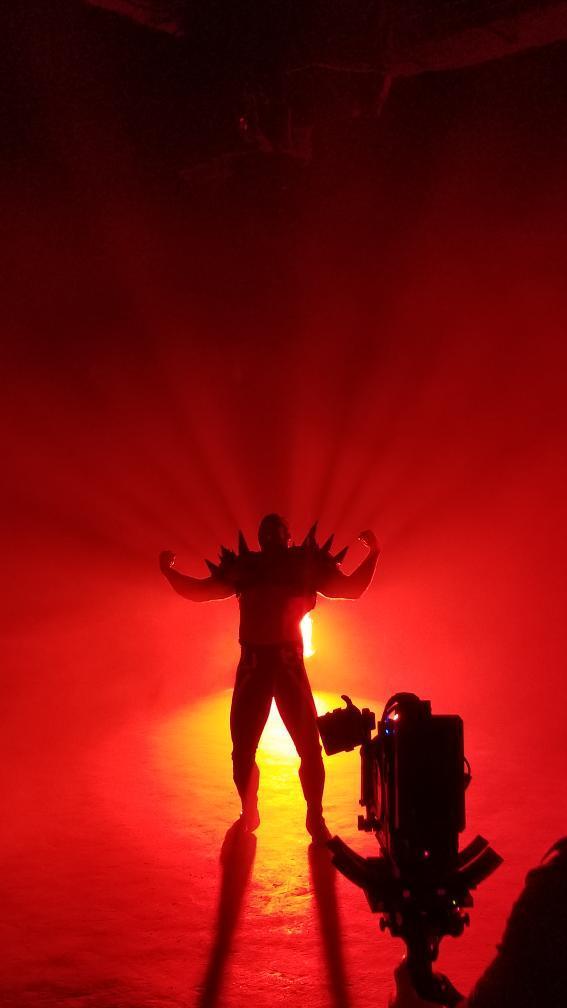 While he may not put on the make-up again, Rage is definitely hoping to get back in the ring soon. With his day-to-day job also affected by the current social-distancing restrictions, Rage is anxious to get back to work.

“I do personal training, and unfortunately that’s an industry that’s been hit pretty hard. I still do some virtual workouts for some of my clients, one-on-one sessions. And I’ll be opening up my own fitness page soon, UpperEchelonFitnessTraining.com.”

At 39 years of age, Rage is realistic about his chances of signing with a major company. But he still yearns to get back to the ring.

“Once we’re allowed to get back, though, I really want to get back in the ring soon. I’m very grateful for wrestling, and the opportunities it’s given me. I’ll be very happy to be doing it again.

Dark Side of the Ring airs tomorrow night at 10 on CraveTV and Vice TV I the United States.