Joe Pedicino, the Atlanta-based host of a block of wrestling shows called Superstars of Wrestling, and the highlight show Pro Wrestling This Week, and later a WCW on-air personality, has died at the age of 70. He had a stroke in 2019.

News of his passing broke on April 20, though he died on April 12. 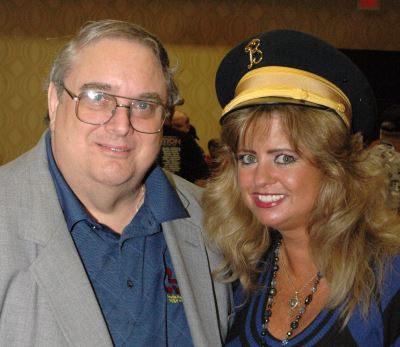 Joe Pedicino and Boni Blackstone at a fan fest in Charlotte in 2011. Photo by Ashley Forrester

Pedicino hosted Superstars of Wrestling from 1986 to 1991, with his wife Boni Blackstone usually alongside him.

“RIP Joe Pedicino. I used to LOVE watching Pro Wrestling This Week. He was awesome,” wrote Joel Gertner on Twitter.

For a full career retrospective, go back to 2011, when Michael Andrews did a lengthy interview with Pedicino: Superstars host Pedicino still a fan.

Later, he worked for a variety of promotions as a host and commentator, from the GWF to WCW.

It wasn’t always obvious when Pedicino was in fact the man running the show, such as he did with the Global Wrestling Federation in the early ’90s, which ran for a time on ESPN.

The shows he aired and the time he took to talk about up-and-coming wrestlers made an impact.

“Without Joe and Boni Blackstone, The Patriot as I knew it would have never existed. Forever grateful!” wrote Del Wilkes on Facebook.

On Instagram, Sean Waltman said something similar: “If it wasnt for Joe Pedicino, most of you wouldn’t even know I exist. He gave me my first big break & I’m forever grateful to him. GWF on ESPN 5 days a week, provided a springboard for so many us & we all owe him a debt of gratitude. Sending my love to his Boni, their family & loved ones. #RIPJoePedicino”

Trapper Tom Leturgey noted on Twitter that “When Nick Busick worked with Pedicino, it was Joe who said Nick ‘looked like a guy from Pittsburgh’ with the big mustache. So, the hat and cigar were added to the mix. They thought that look was ‘a Bully.'”

Pedicino and Blackstone owned the FM country station 92.5 The Bear.

Further details on his passing, or the delay in the news getting out, are not known.