Starting a company from the ground up is no easy task but if it’s done right, there is no better feeling than that of success. AEW has had an explosive start to 2020, and Cody Rhodes, its executive vice president, believes that this theme will remain throughout the year.

In a conference call on Tuesday, Cody explained how even with a small team, they’ve been able to create memorable events, sign dynamic and talented wrestlers, all the while creating a new, engaged wrestling fanbase that he is proud of. 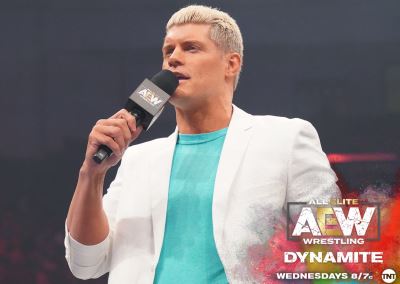 AEW operates as a small team, he said, and that won’t change going forward. “We always like to keep our inner circle small — no pun intended,” he said. “It was always Tony [Khan’s] plan to keep the AVPs on the creative side and it’s been great, because we are forming a team for the long term.” Currently, the executives include Rhodes, Kenny Omega, Nick and Matt Jackson as VPs, with Brandi Rhodes as chief brand officer.

Even through some of the growing pains he and his team have experienced, AEW has some exciting events that have been announced, including one that has found a home in Las Vegas.

The company will be returning to Sin City for the Double or Nothing pay-per-view, something that is special to AEW, according to Rhodes. “MGM Grand is just a magical place.” The VP said that this venue holds many important moments in wrestling’s history. “Just thinking about those green seats gives me goosebumps,” he said.

Rhodes also revealed that Vegas will host the following Dynamite after the pay-per-view. From that Saturday up until Wednesday, AEW wants to have many other smaller events during the week, hoping to get fans to join in on the fun. “We want the entire wrestling world to come out to Vegas and celebrate Memorial Day weekend with us.”

Another idea that Rhodes would like to see come to fruition are some dates in the Great White North. “When I think about Canada and wrestling I think of some wonderful memories that I’ve had at the Bell Centre in Montreal and in Abbotsford, [B.C.]… man you can never go wrong there!” he said excitedly. This has definitely been something that’s been talked about and he hopes to see this happen this year.

He added that the first stop would most likely be in Toronto, though nothing has been confirmed. “I have a great love for that country and the type of fans they are.”

Rhodes wants to keep all of the fans by providing them with talent that will entertain him personally in the ring. That, he said, starts with scouting and AEW has been looking in new places for potential new competitors. “Taz and I want to take a trip to the NCAA finals for collegiate and folk-style wrestling and there are eyes on the combine for potentially grooming professional athletes,” he explained. Even during this conference call, Rhodes said he was multitasking and looking into a new recruit.

“Chris Bey is someone that could possibly be a good fit for our singles division,” Rhodes said. The 24-year-old wrestler from Las Vegas has performed for many indie promotions such as Wrestling Without a Cause and Maverick Revolution. Bey’s name was mentioned in response to whether or not AEW was making signing men of colour a priority for the company. “I wasn’t pretending when I said we want our show to be congruent with what America really looks like in 2020, and moving forward.”

AEW is also making the women’s division a priority, something that it has been criticized for in the past.

“You hear the good and the bad things about your shows, and you just have to keep your ears open to it and the one thing that is going to take time is the women’s division.” Rhodes said, elaborating, by saying that AEW is a merit-based show and that the best wrestlers will continue to perform every Wednesday.

This division has produced some of the most popular segments and shows it has had to date. “Nyla Rose becoming the second women’s world champion is an amazing moment, and maybe the best match on the best show we’ve done all year and that just speaks to the talent level we have.”

Overall, the executive vice president has no regrets since he’s been involved with AEW. “Everyone is always really excited to get to the venue on Tuesday and no one really wants to leave after the show on Wednesday. That’s a passion and you can’t really put a price on that.” He added that he wanted to do this right for every wrestling fan, and even create new ones down the road.