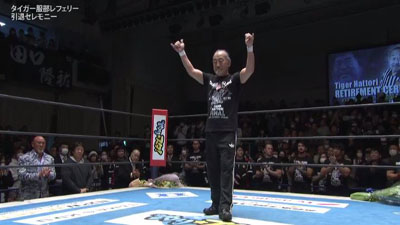 Tiger Hattori has called it a career. After 42 years of being a wrestler, a trainer, a manager and most notably the senior referee in NJPW, Hattori has retired.

The retirement event had more of a casual vibe to it as Hattori himself has a playful personality.

Colt Cabana joined Chaos in saying thank you to Hattori for all his dedication and hard work. As a tribute to him, Okada allowed Hattori to pin him with a three count.

Tiger wiped away some tears as Chaos left the ring.

Jushin Thunder Liger himself led the rest of the NJPW talent to the ring. The group included Katsuyori Shibata.

The NJPW referees presented Hattori with a special referee jersey signed by all of them. That gesture brought more tears to his eyes.

There was also a video message from Antonio Inoki. Before he took to the microphone, the crowd chanted “Thank you, Tiger!” in unison.

“I have spent my whole life loving this sport that is professional wrestling. There is so much happy moments and sadness. There is so much team work, so much backstabbing in this business but it has been a hell of a journey. Thank you to everyone who supports this business that we are all a part of,” said Tiger to the fans in Korakuen Hall.

“I will forever treasure this moment and all the moments that I have had in this business,” he said also extending a note of appreciation to everyone who is involved with making NJPW what it is today.

Hattori closed his eyes as the ring bell was sounded 10 times in his honour.

The NJPW talent then hoisted him into the air in celebration of his career.

Earlier in the evening during his two retirement matches Hattori made his presence felt more than just slapping the canvass and enforcing the rules. He kicked Gedo in the “lower abdomen” when Gedo threatened him during his first retirement match and did the same to Jado when he swung his kendo stick at him. Hattori then threw up his fist with the rest of Los Ingobernables de Japon after they beat Choas in the last official match.

Ryusuke Taguchi, Rocky Romero and Tiger Mask versus Will Ospreay, Sho and Yoh

Will Ospreay put Tiger Mask down for the 1, 2 , 3 with Storm Breaker. Romero and Taguchi got into it with Sho and Yoh as the others tried to separate them. Sho and Yoh face Ryusuke Taguchi and Rocky Romero for the IWGP Junior Heavyweight Tag Team Championship tomorrow night.

Winners: Will Ospreay, Sho and Yoh.

A Left Hand of God, a Stunner and Pulp Friction pins Bushi.

Winners: Will Ospreay, Sho and Yoh.

Kojima pinned Kanemaru with the Lariat.

Yano and Cabana double-teamed Fale for the win.

Sanada put Goto away with a roll-up.