As much as everyone likes to celebrate the amount of televised wrestling that is available, much of it in prime time on major channels, it can be tough to compare it to the past. Was there more wrestling in the 1970s in the territorial system? More wrestlers making a living?

What I CAN say, without a doubt, is that the amount written and researched about pro wrestling is incredible today.

There is no comparison to the past.

Again, jumping back to the 1970s, there were a few wrestling historians out there collecting results and information. It was based on an honour system of sorts, where fans and fellow historians in other areas sent in the results, whether gotten in person at the matches or from the notoriously inaccurate newspaper reports. And newspapers only covered pro wrestling as a novelty; some, like the Toronto wrestling office, had its public relations man write a column for the newspaper.

Today, everyone and their brother and sister can be a researcher. Armed with a library card, they can do even more … though it’s not the same as learning the Dewey Decimal System, flipping through index cards, or scrolling by hand through month after month on microfilm. Ever looked through a Canadian Periodical Index? Didn’t think so. Sometimes, you would get lucky and a library would have a clipping file on a subject, like wrestling, or a specific person, often if they were local.

This is not to discount or downplay the incredible work done by the likes of J Michael Kenyon, Terry Justice, Fred Hornby, Don Luce, Steve Yohe and others in the past, as it is the building blocks for the enormous treasure trove of research that exists today.

The real challenge is in sorting the wheat from the chaff, determining what’s legit and what could be made up or exaggerated, especially true in a worked business like professional wrestling.

This brings me in a roundabout way to the new book, The Eighth Wonder of the World: The True Story of André the Giant, written by occasional SLAM! Wrestling contributors Bertrand Hébert and Pat Laprade; coincidentally, this article is going live on January 28th, 27 years after Andre died.

In a quickly-made post I made to Facebook’s Professional Wrestling Historical Society Book Group, I wrote “There are more facts in the first chapter than the entirety of the earlier book by Michael Krugman.”

Think about that statement for a moment. Krugman’s Andre the Giant: A Legendary Life came out in 2009. It was a WWE Books publication, so everyone expected a little bit of bias towards the WWWF / WWF / WWE. Instead, it was a trainwreck of misinformation and ballyhoo, forgetting to tell the actual story of Andre Roussimoff.

Here we are 11 years later, and Laprade and Hebert were able to talk to Andre’s family, friends, dig up actual documents relating to surgeries, and so much more. Sure, Laprade also worked on the HBO documentary on Andre too, which helped him with access, but it’s more than that.

And it’s more than working hard. It’s just the sheer availability of everything today.

As a teenager who used to go to the main branch of the Kitchener Public Library downtown on a weekly basis, simply because it had newspapers from other parts of North America, meaning I could dig up more wrestling cards and stories, well, it’s an awe-inspiring time to be alive.

You’ll often hear me comparing writing about pro wrestling to pro hockey, with seven books of each under my belt now. The fact is that hockey has been researched and documented for decades, the various leagues even employing statisticians. Wrestling? It’s always been the Wild West, the promoters and wrestlers making up whatever stories they want.

Let’s declare today International Wrestling Researcher Day. Thank your nearest researcher, though you might have a tough time getting them away from a screen! 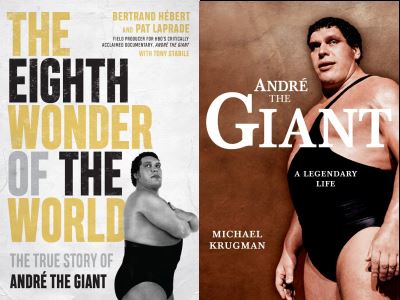