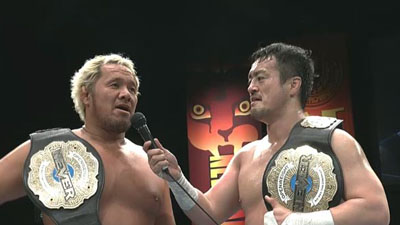 Ryusuke Taguchi in his rugby gear and wrestling in his hometown of Sendai taunted current IWGP Junior Heavyweight champion Taiji Ishimori before the bell rang. Ishimori defends that title against Taguchi at the New Beginning pay-per-view on February 11th. The two rivals locked horns to start the match.

Taguchi caught Ishimori in his ankle lock submission forcing Ishimori to flee the ring for a breather. Ishimori rolled back in and tagged Tonga. Taguchi tagged in Yano. Still insisting he has turned over a new leaf; ‘Good Guy’ Tonga offered Yano his hand in friendship.

“No, I am a good guy!” replied Tonga reaching for a hug.

Yano avoided Jado’s kendo stick as he hit the ropes.

From inside the ring, Tonga admonished Jado for attempting to cheat. Jado leapt up onto the apron and the two Bullet Club members argued. Yano pushed Tonga into Jado.

“What are you doing?” Loa asked Tonga.

After Loa, the illegal man, stomped Yano, Tonga apologized to him.

Ishimori tagged in heaving Yano out of the ring so that Jado could attack and choke him with the kendo stick.

Tonga leapt out of the ring to stop Jado.

“Jado, no!” yelled Tonga asking Yano if he was okay before rolling him back into the ring.

“Please, don’t cheat. I love you,” Tonga said to Jado.

Eventually, Taguchi and Ishimori faced off again. Taguchi had Ishimori pinned with his Dodon (Chickenwing Facebuster). The official, Red Shoes, was pulled out of the ring by Jado before he could slap the three count.

Chase Owens interfered bashing Taguchi. He lifted Taguchi up for the Package Piledriver; however, Yano punched him in the “lower abdomen”.

It was Bad Luck Fale’s time to jump Taguchi. This brought out Kazuchika Okada who drop kicked Fale out of the ring.

Next, ‘Switchblade’ Jay White jumpt into the ring. He set up Taguchi for a Blade Runner until Tanahashi blasted him with a Slingblade.

Shota Umino and Ayato Yoshida defeated Yota Tsuji and Toa Henare. Umino pinned Tsuji with a Fisherman’s Supex. Henare was pissed off at the loss.

Shingo Takagi defeated Yoshinobu Kanemaru via disqualification. Kanemaru spit his whiskey but missed. Takagi was going to finish Kanemaru but El Desperado attacked him with a steel chair. Bushi entered the fray to even the odds. The official called for the match between Bushi and El Desperado to start.