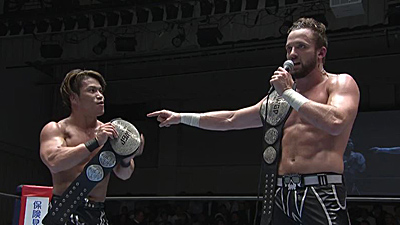 It is time once again for the “juniors” to shine. The eight teams competing in this year’s NJPW Super Jr. Tag League tournament are:

During Night One of NJPW’s Super Jr. Tag League the current IWGP Junior Heavyweight Tag Team Champions in Bullet Club proved why they are at the top of the ladder by defeating The Birds of Prey in the main event of the evening.

In the final moments of the match, El Phantasmo took kick after kick to the head from Eagles. Phantasmo and Ishimori combined to put a stop to that flurry of offence. As Phantasmo hoisted Eagles up for his Spinning Argentine Backbreaker, Ishimori gave Eagles a jumping knee strike to the head. Ospreay leapt over the top rope to stop the pinfall. Phantasmo rolled out of the way and Ospreay ended up landing on his own partner.

Bullet Club super kicked Ospreay out of the ring. Phantasmo got a two count on Eagles.

As the count cheered for Eagles he fought off both Ishimori and Phantasmo. Ishimori fell into the official sending him crashing into a corner.

“We are the IWGP Junior Heavyweight Tag Team Champions and we will win Super Junior Tag League 2019 and then you know what? We are going to get our faces on a poster for Wrestle Kingdom,” Phantasmo promised.

The winners of the tournament will get to face the current IWGP Junior Heavyweight Tag Team Champions in Bullet Club (El Phantasmo and Taiji Ishimori).

Yuya Uemura and Tiger Mask versus Titan and Volador Jr.

The team from CMLL does well in their first match just outmaneuvering the Young Lion. Titan pins Uemura with a Springboard Double Stomp although Titan is holding his knee in agony after the match.

Rocky Romero and Ryusuke Taguchi versus Clark Connors and TJP

Great to see TPJ back in New Japan. Sign him, like yesterday, NJPW or AEW. He is one of the very best of his generation. Romero spikes Connors with a Falcon Arrow and makes him submit with a Crossarm Breaker.

As the official is distracted, Kanemaru clocks Sho in the head with his whiskey bottle and Desperado bashes Yoh in the back with a steel chair. Desperado makes Sho submit.

Henare continues to improve as he pins Tsuji.

Taichi and Naito continue to have their issues as they head to their singles match at Power Struggle. Douki submits to Evil’s Scorpion Death Lock.

Kenta and Ishii aren’t getting along. Ishii attacks Kenta as he has Fredericks in a Boston Crab but Kenta will not break the hold no matter how much Ishii wallops on him. Kenta pins Fredericks with Go to Sleep.

John Powell is a veteran entertainment journalist, the Editor-in-Chief and one of the founders of SLAM! Wrestling.