AEW Dynamite: Allin gives his all to try to dethrone the Painmaker

Light the fuse, Philly! AEW Dynamite hits the City of Brotherly Love with a pair of title matches and the continuation of the tag team tournament. That’s a lot to pack in, so let’s not wait: To TNT we go. Insert some more explosion puns here if you wish.

This might really be the worst town SCU has ever been in, because Christopher Daniels gets attacked by Pentagon Jr. and piledriven on the ramp before the opening bout can begin. If only SCU had an extra guy who could take the place of Daniels … oh wait, they do. As Daniels is tended to, Scorpio Sky wraps his wrists and gets ready to fill in for his fallen teammate.

Sky tosses his shoe into the crowd, and mimicking the tradition at some baseball stadiums, the fans throw it back. Must have been some big Best Friends supporters. Despite the Best Friends managing to get in their hug, it doesn’t help them in the end, as Kazarian and Sky pull off a double team move to pin Trent. Sky needs a graphic that lists his record wrestling in socks and ripped jeans.

John Silver and Alex Reynolds, please take your time in the spotlight. Not much time, however, as the Street Sweeper finishes the match pretty quickly. Chris Jericho appears on the big screen to say his pit bulls did exactly what he expected, and that they want to challenge the Young Bucks at Full Gear.

Want to know more about Cody Rhodes? Then you should really watch the vignette that airs here ahead of his title match with Jericho at Full Gear, which features insight from wife Brandi, his mom, DDP, MJF, Jim Ross and Tony Schiavone. Very well done, enough so to remind you that WWE doesn’t have a monopoly and well-produced video packages.

There’s an interesting dynamic here as Baker gets to work as the powerhouse since she’s much bigger than Riho … though that’s true of nearly everyone. Both women are tested by each other’s submission holds, but as the Lockjaw is fully applied, Riho is able to flip Baker on her back to get the pinfall. A fine finish to a fun match. Is Baker going heel or will she show respect after the bell? Looks like it’s the latter as the women shake hands.

No Luchasaurus is a bummer. The announcers say that he has a non-contact thigh injury and had to visit a hospital for treatment. Sounds grim, so hopefully he’s OK. With Stunt filling in, there’s a lot more aerial craziness, as well as an extended sequence through a commercial break where poor Marko has to absorb a tremendous beating. That’s a good skill to have if you’re going to be the smallest performer in every match, and this version of Jurassic Express definitely is entertaining in its own way. In the end, the Lucha Brothers advance, so now the only question is whether they’re supposed to now be heels. They did get some boos before the finish here.

The crowd wishes Omega a happy birthday, but all he wants to do is get his hands on Moxley as quickly as possible. Page really needs this as a showcase, but we say that every week at this point. He certainly does look good, but the match is such that everyone else does too. The fans really like when all four men end up taking flight in fairly short order, and that’s not even the climax of the bout.

Eventually, Omega and Moxley end up facing off with their barbed wire-wrapped weapons, but PAC refuses to let Mox use his, unwilling to get disqualified. An enraged Moxley DDTs PAC, who takes a V-Trigger and the DeadEye that leave him down for three.

Perhaps unwilling to allow Allin to be the only one with a painted face, Jericho has his Painmaker makeup on for this title defense. It doesn’t take long for Allin to show a little blood.

The street fight aspect is thanks to a kendo stick and a steel chair, but the fans also want tables. Jericho does something even more sadistic, grabbing some electrical tape from beneath the ring and tying Allin’s hands behind his back. With no hands free, Allin still hits a springboard moonsault and a dive between the ropes to the floor.

He comes off the top as well, pinning Jericho by laying on him and earning a near fall. The champ powerbombs the challenger on his own skateboard and is surprised to only get a two count. Allin wills himself to the top turnbuckle again, but with the ref distracted, Jake Hager smashes him with a right hand. All that’s left after that is the Walls of Jericho and a submission by Allin. The rest of the Inner Circle joins Jericho to celebrate with a little bit of the bubbly as Dynamite wraps up. See you in seven! 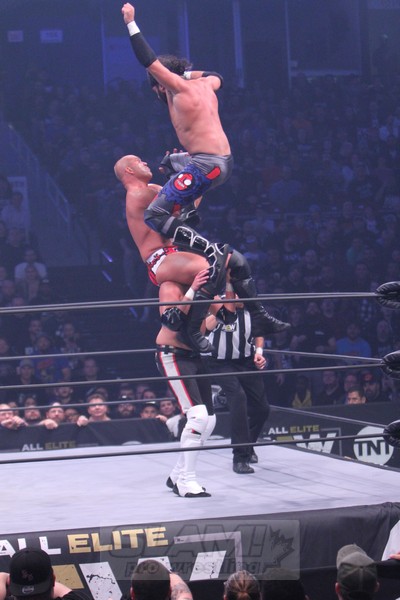 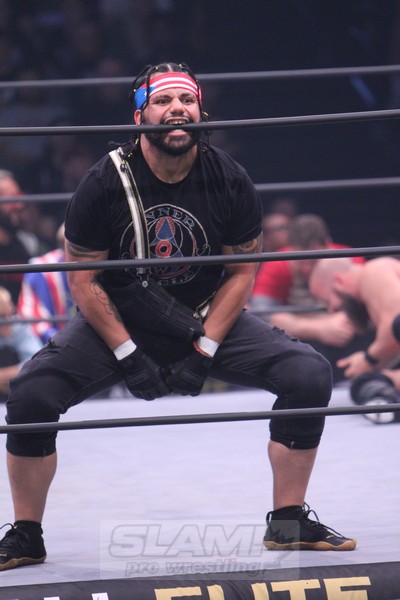 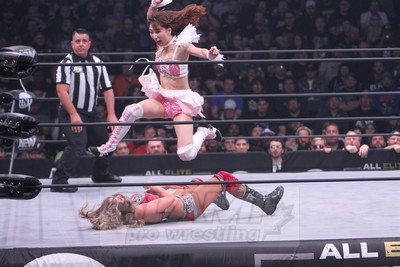 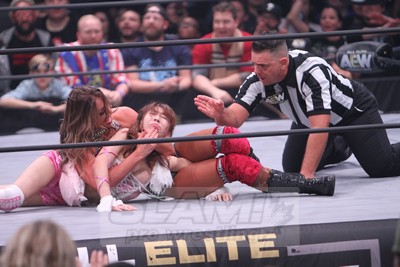 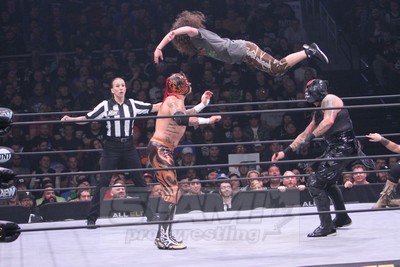 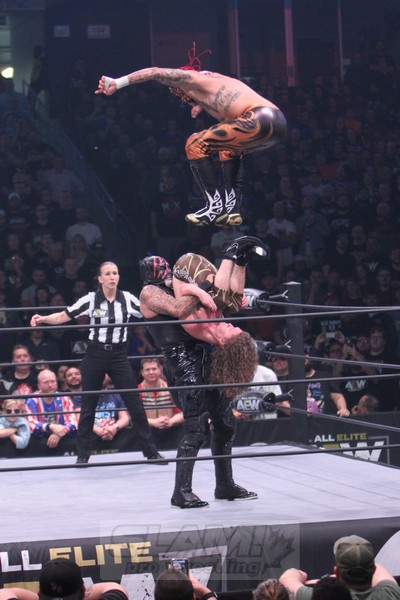 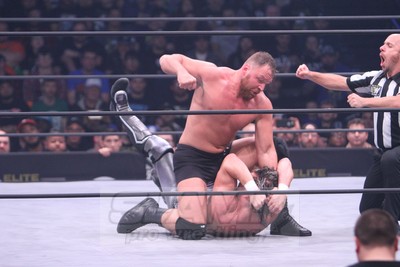 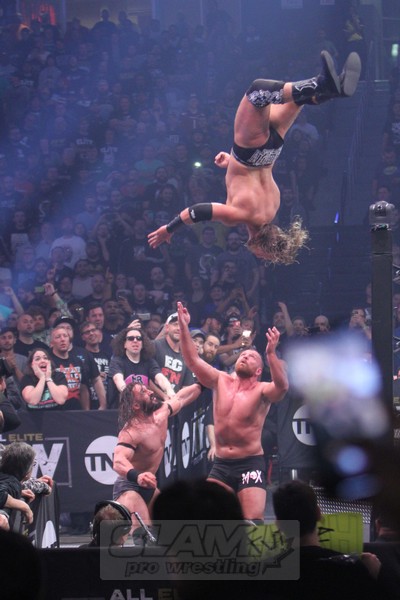 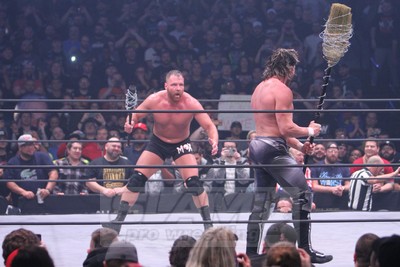 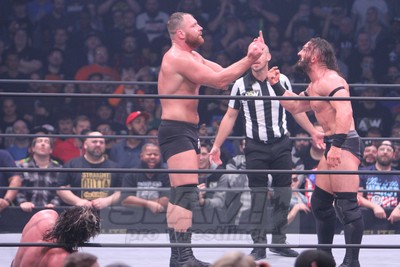 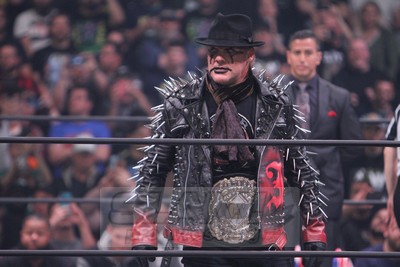 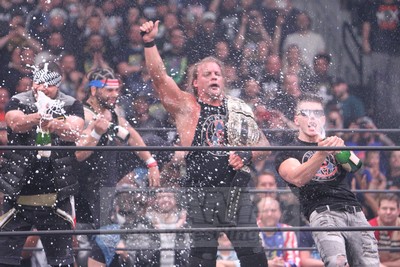 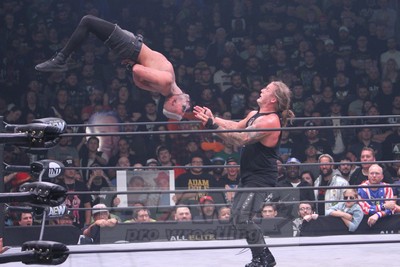 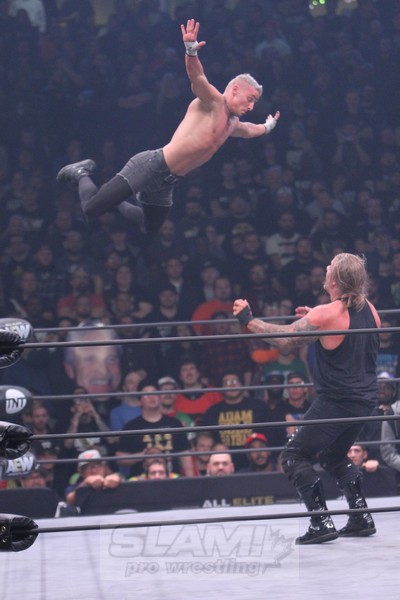