Rob Van Dam has always been the epitome of casual cool in the wresting world but outside the squared circle, he has faced and overcome some serious life battles, situations that forced his to grow as a person.

“My values didn’t change but my priorities did. I got divorced from a long-term marriage. We were separated probably 15 years in and took another 5 years until the divorce was final. It got ugly. As you see in my movie Headstrong, I’m real honest about this time period in my life. I kind of got dumped on. I got separated then my dog died and then my dad died. I was so low,” he confesses. 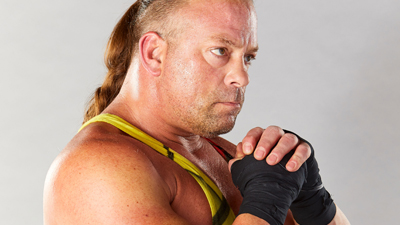 RVD says he had to “rebuild” himself. Photo: Impact Wrestling.

“I went through a deep depression and during that time it completely changed everything that was important to me because I couldn’t think big picture. I couldn’t even get to the end of the day. The one thing that helped me get out of it was that I had to live moment to moment. Someone told me to do that and I could enjoy happy moments but I couldn’t think past that. That’s what got me to feel joy again. I had to rebuild myself and when I did with different priorities. I’m now a grown-up. When I think about what happened before that, my outlook on the world, my vibe with WWE, the decisions I made, the way that I talked to people, the way that I thought people looked at me, it was completely different,” he continued.

Age has given Rob the gift of comprehension and wisdom too.

“In my mid-forties I now feel like I understand life more than ever. It’s completely different with the universe in a way that is rewarding right now. It’s where I’m supposed to be. I’m in a great relationship. Katie Forbes is amazing. I look at the past and knowing what I know now, I wouldn’t have stuck with that marriage. I wouldn’t have fought the divorce because I didn’t know life was going to be so good now. Where I thought I was happy before, I was complacent. I can look at a lot of feelings I had back then and realize I was looking at them from a immature perspective,” he said reflecting on his life. 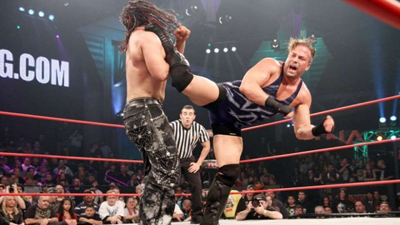 RVD is proud of the message behind his documentary Headstrong. Photo: Impact Wrestling.

“There’s an expression, if you become a pro athlete or if you get into the entertainment business as a kid, you stop aging at that age. I kind of think that I fell victim to that too. I got into pro wrestling right out of high school at 18 and honestly I feel like I’ve just always been successful. I’ve never had to deal with problems like those people who are so grateful to have their position and be on the road and not have to work that job at Home Depot that they use to have. I never had any of that. I got right into it and was always making enough money. I was a babyface and I could sell my merchandise even when the pay was really bad,” said RVD reflecting on his career.

Another battle RVD had to overcome occurred when he showed up for a stand-up comedy tour with concussion symptoms.

“At first, I thought I would just ignore it, it would go away. The show must go on. I tried to keep going but I had double vision and I kept thinking that I would wake up fine the next day but I never did and it became an issue. The movie about my life (Headstrong) became about my vision impairment that I got from this one concussion. After the tour I saw a neurologist and had to get a CAT scan then an MRI, and vision therapy and I bring the camera with me. This is all happening live. I’m putting everything on the line saying: What if I do have CTE? Let’s talk about that and inspire people. I did everything wrong when I got that concussion. You need rest and I felt like I needed to stimulate my brain,” said RVD.

“I’ve had hundreds of concussions but in 99 percent of them the symptoms are gone in 10 seconds and I’ve had a few, very few that lasted until the end of the night. This one, six months later, 12 months later, I was in vision therapy and it was still getting better and better and improving. I learned that the doctors, they don’t really know that much. They can only guess at what there were telling me,” he explained.

For RVD, concussions and the way the wrestling industry deals with them is a life and death issue.

“You know why it’s so important to me? It’s because my friends, so many of my friends over the years, had concussions and received long-term damage. What can happen and does happen, they get depressed and kill themselves. We’ve already lost 25 wrestlers in 2019,” said a regretful RVD.

“I want everyone to know what I went through so everybody can learn from it. It’s really important to me. I’m trying to continue the discussion because we are talking about possible cures for concussion damage. The Stem Cells, oxygen therapy and CBDs (part of the cannabis plant). I want to keep talking and come up with something so that we can put this behind us and it can be a thing of the past. When we can treat CTE or concussion damage we will also be able to treat Alzheimer’s and maybe even depression. It’s all very related. I love life. I don’t want something taking over my brain and making decisions for me,” he said.

RVD is thankful that Impact Wrestling gave him a platform to spread awareness about his documentary. He is glad to be part of the company again.

“Everyone is very respectful. All these young guys have come up to me at different times and expressed how excited they are to share a dressing room with me and that goes a long way with me. A lot of them tell me that the reason they wrestle is because they use to watch me and they’re risking sounding like a mark (laughing) but for them to open up like that means a lot to me,” said a grateful RVD.