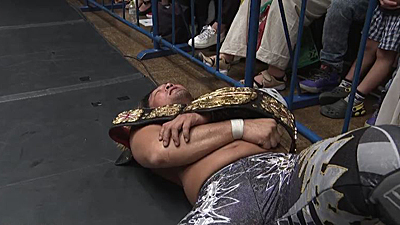 The battle for the RevPro British Heavyweight Championship wages on in NJPW. Zack Sabre Jr., who lost the championship to Hiroshi Tanahashi at NJPW Royal Quest last week, punished The Ace on the third night of the Road to Destruction tour.

During the mind-blowing finish, Suzuki held Taguchi in a sleeper in a corner while Mister Excitement gave Tanahashi and Taguchi a Zach Driver. Sabre Jr. then pinned Taguchi. The World’s Most Electrifying Superstar slapped on one of his breathtaking submission moves to damage Tanahashi’s arm and shoulder even further and wouldn’t let go. Suzuki was content just kicking the stuffing out of Taguchi.

At Suzuki’s instruction, Sabre Jr. stomped on Tanahashi’s arm apparently injuring it or breaking it.

“It this your champion? That championship is mine!,” screeched Mister Excitement to the crowd as Tanahashi rolled out of the ring. As he left, Sabre Jr. draped the title over Tanahashi.

“I barely broke a sweat. This isn’t my sweat this is the Ace, the champion,” said Sabre Jr. backstage after the match.

On September 15 at NJPW Destruction in Beepu, Tanahashi faces Sabre Jr. for the British Heavyweight Championship once again.