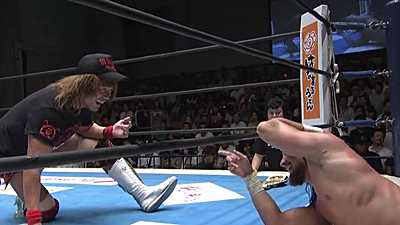 Naito puts his IWGP Intercontinental title on the line against White at Destruction in Kobe on September 22.

As the bell rang, Naitio taunted White advising him to maybe smile more often. The crowd chanted Naito’s name infuriating White. Naito backed away from Switchblade motioning him to take it easy and relax. Naito was distracted by Gedo allowing White to attack him from behind. Naito kicked Switchblade in the stomach, threw him out of the ring and slid along the mat finishing in his Tranquillo pose. Hanging onto the ringside barrier White smiled back at Naito. Los Ingobernables de Japon double-teamed White with Evil landing a senton drop and Naito delivering a running boot to the head. Naito stood over White leisurely kicking him in face.

Fale yanked Naito off the apron hurling both Naito and Evil into the ringside barrier. Fale took a souvenir Evil scythe and smashed it into Evil’s skull while Switchblade mimicked Naito’s taunt back in the ring. The crowd showered him with boos.

Once tagged in, Fale just walked over to a fallen Naito and stood on his chest. The Rogue General was quick to tag Switchblade back into the ring. White took Naito back outside slamming his spine back and forth between the ringside barrier and the ring itself. Switchblade sat on the apron, his arms crossed and smiling staring down at Naito. A cruel White clapped along with the crowd encouraging Naito to get back to his feet. When he did, White pitched him into another barricade. White tagged Fale back in. Naito just ignored Fale throwing punches at a departing White. Fale made him pay for it by slamming him hard to the mat.

After taking an incredible amount of punishment from both White and Fale, Naito finally tagged in a completely fresh Evil. Evil shoved Fale off of Naito so he couldn’t complete his Grenade finisher. Fale whipped Naito into Red Shoes. Red Shoes crumpled to the apron then fell out of the ring to the arena floor. With Red Shoes incapacitated, Gedo snuck into the ring. Natio atomic dropped him and shoved him to the canvass. This gave White the chance to hit Naito in the stomach with a steel chair. Evil rolled into the ring with a steel chair. He clobbered White with it. Naito spiked White with a Destino. Evil put one of the chairs around Fale’s neck then struck that chair with another as per his usual heel move. Naito put Fale away with Destino.

Naito crawled over to White. He grabbed White’s face forcing his one eye wide open as per his signature taunt.

Uemura has no choice but to tap out to Richards’ submission hold.

Fredericks’ arm and shoulder are heavily bandaged up. Narita makes Fredericks submit via his Butterfly Lock.

Just like Night One, the match ends the same. Kojima pins Tsuji with his Lariat.

No matter what he throws at him, Owens cannot pin Ishii. Ishii gets some help from Yoshi-Hashi before he puts Owens away with his Brainbuster.

Douki almost pins Sho but Taguchi and Tanahashi make the save. Sho won’t be put away with the Suplex de La Luna. Yoh super kicks him in the face. Everyone brawls, trades blows in the ring. A backcracker from Yoh on Douki leads to a drop kick by Yoh. Douki gets 3K’d into next week.

An Ushigoroshi and a GTR pins Bushi. Goto and Shingo share some unpleasant words.