Road to Destruction Night One: Los Ingobernables de Japón comes out on top 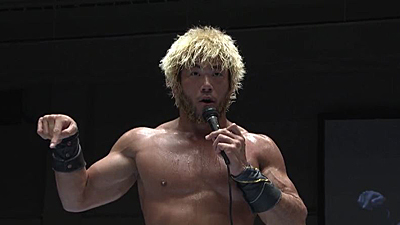 Los Ingobernables de Japón (Shingo Takagi and Sanada) scored a crucial victory over Hirooki Goto and Kazuchika Okada at the first night of the Destruction tour. Okada will be putting the IWGP Heavyweight Championship on the line against Sanada at King of Pro Wrestling in October and Shingo will be facing Goto in a special grudge match at Destruction in Kobe on September 22.

Sanada was well on the path to victory once he sent Goto to the canvass following a wicked forearm smash during their slugfest in the middle of the ring. Goto blocked a suplex attempt while Okada bashed a turnbuckle cheering him on.

Shingo rescued Sanada from being suplexed by smashing Goto in the back. For good measure, Shingo punched Okada in the face knocking him off the apron. Goto repelled the impending double team suplexing Sanada onto a prone Shingo. Okada tagged in running over Sanada with a back elbow to the jaw and a DDT.

Goto unleashed a furious attack, splashing, slamming and spiking Shingo for a two count. Goto and Shingo peppered each other with forearm smashes. A Ushigoroshi had Shingo tagging in Sanada. Sanada punched Okada off the apron. An angry Okada dove back into the ring attacking Sanada. Sanada sent Okada back out of the ring with his leap over, drop kick combination. Goto wouldn’t submit to the Skull End. Sanada had to roll him up with a bridge to pin him.

Love the fact that they are featuring more matches with the Young Lions. Connors makes Umino tap out to the half crab.

Just like his LA Dojo counterpart, Connors makes Umino submit to a crab.

Kojima blasts Narita with his finishing lariat to win the match for his team.

Pieter Tokyo Latina comes out with Takahashi and she is looking as fine as ever. It is a shame that U.S. wrestling has ditched valets and managers, whether male or female. Eagles needs to be the Junior Heavyweight Champion in the future. Henare kicks out of Jewel Heist but not the Package Piledriver. El Phantasmo and Taiji Ishimori taunted Robbie Eagles and Will Ospreay with their tag titles.

Yoshi-Hashi forces Jado to submit to the Butterfly Lock. Tanga and Tama attacked him after the bell. Yoshi-Hashi fought out of a Magic Killer. Yoshi-Hashi and Ishii beat the tar out of Tonga and mocked the Guerrillas of Destiny with their own title belts.

Although Douki’s foot was over the bottom rope, the official counted three for Taguchi. Douki argued with the official. Tanahashi made his way over and the two got into a shoving match.

Gedo submits to Evil’s Scorpion Death Lock. All throughout the match there is more heat between Naito and White to hype their upcoming title match.