Thoughts from the crowd at All Out 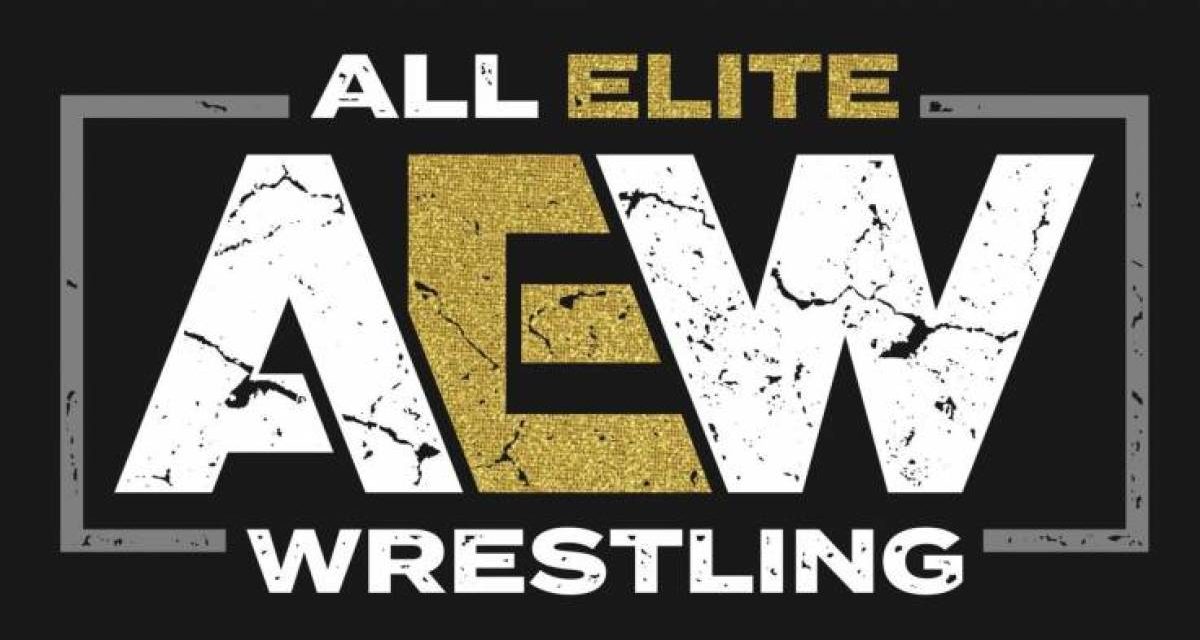 HOFFMAN ESTATES, Ill. – As I sat in the stands during All Elite Wrestling’s sophomore pay-per-view effort, All Out, on Saturday night at Sears Centre Arena, I couldn’t help but be almost stunned. 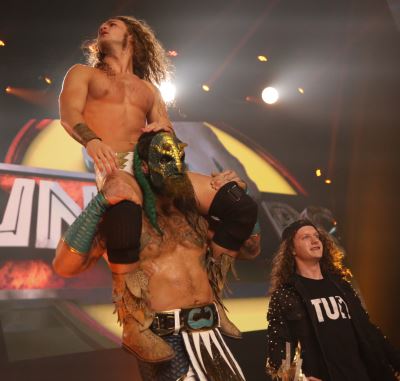 This isn’t an indictment against WWE. That company runs a very polished, almost robotic television production, and it shows in the in-ring action and by the crowd responses. Sometimes it’s for better, sometimes it’s for worse.

At All Out, AEW felt organic. For as much flack as wrestling fans generally get, one would almost expect a show in front of some of the most hardcore wrestling fans you can find to be nearly insufferable. Just like at All In last year in this same building, it couldn’t be further from the truth.

The fans clearly are taking to it.

Instead of trying to be part of the show, the AEW fans are making it a point to enhance the product. The reactions to many of the big moments on the show took the show from being very good to great.

In fact, instead of inane chants, the crowd just got up and cheered. What a novel concept.

Contrast that with WWE’s two latest big shows, NXT Takeover and SummerSlam in Toronto. While Chicago and Toronto are both known to be two of the best wrestling cities on the continent, the crowds could not have been any different.

Let’s use NXT Takeover as an example. Tremendous show, great crowd from top-to-bottom, but at times, they seemed almost programmed. Nearly every match drew a “This is awesome!” chant, sometimes at multiple times. But it seemed as if the wrestlers were wrestling to draw those chants. Do a lot of big moves, both wrestlers go down, and boom, there it is. As predictable as the clock each day.

Contrast that with All Out. There were times where about four of five people wanted to start a “This is awesome” chant. Although the action was great, it never got off the ground. In fact, the chant only got going once after a particularly rowdy sequence between The Young Bucks and the Lucha Brothers. 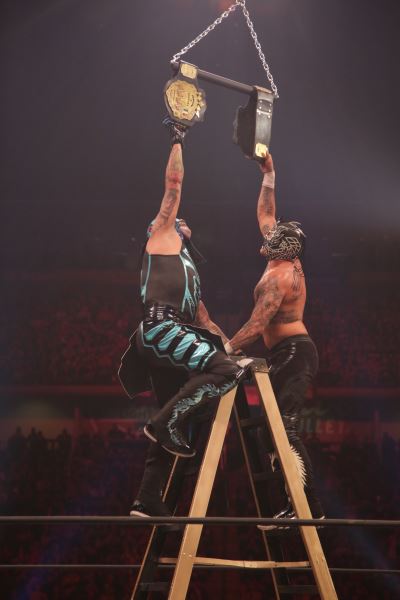 The Lucha Brothers atop the ladder.

Watching a non-Japanese wrestling show where the crowd wasn’t interested in getting itself over was a treat, that’s for sure. If AEW continues to get organic reactions like this when its weekly television show starts in October, that will be a big, big difference maker.

However, when looking at the live event experience for the consumer, WWE still is hands-down better in this department than AEW. On “Being the Elite,” which has launched or re-launched many careers during its short existence, those behind AEW have done a tremendous job showcasing people’s personalities through their interview ability. This doesn’t do you much good, though, when the sound isn’t loud enough for the crowd to hear the promos being held backstage. When MJF was shown on the video board before a promo during the pre-show, the crowd went crazy, but then silenced because they wanted to hear what he had to say. However, even with a silent crowd, you couldn’t make out anything he said. There were chants of “turn it up!” to no avail.

The same thing goes for the entrance music. Now, this is definitely an area AEW sorely lacks because nearly none of the music it uses is memorable or will help the wrestlers become more popular. But even if the music was good, again, you can barely hear it inside the arena.

When you go to a WWE show, you hear everything. The bass in Randy Orton’s theme makes your bones rattle. For something that is so critically important to the show’s presentation, AEW badly needs to invest in this before its TV debut next month.

When you’re doing most everything else right, it would be silly to let something like this bring the product down.

Having not seen the show on television, it’s tough to say if the crowd reactions came over as well on the broadcast as they did in person, but a few things really stuck out to me throughout the night.

First off, AEW really has something in its trio of Luchasaurus, Jungle Boy and Marko Stunt. This is a group that has strong appeal across the board and is just a likeable trio. One of the evening’s most incredible moments came when Luchasaurus ran wild over So-Cal Uncensored in the opening six-man tag team match and the crowd ate it alive and went berserk. With the reactions he is getting from the crowd, it might be worth it for AEW to kick the tires on Luchasaurus and strike while the iron is hot on him and see if he can hold his own at the main event level.

Although AEW is positioning itself as the future of professional wrestling, it’s also not afraid to honor the past. Cody is known for obviously having old-school influences, but after seeing legends get abused time after time, it was great to see two former Four Horsemen get to shine. 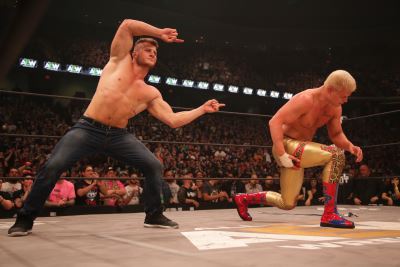 First off, having not been around the wrestling business much in the last 25 years, Tully Blanchard was incredible as Shawn Spears’ second during Spears’ match with Cody. But one of the biggest reactions of the entire came when Arn Anderson hit the ring to even the odds against his former tag team partner. Even though every single fan in attendance knew what was coming, the roof nearly blew off the arena when “The Enforcer” planted Spears with his patented spinebuster.

The ladder match for the AAA Tag Team Championship between the Lucha Brothers and Young Bucks was just about as insane as everyone would’ve predicted. Things got a little too scary at the end, especially for Matt and Nick Jackson, and the Lucha Brothers retained the titles, only for both teams to be battered further by Santana and Ortiz, the former LAX, who made their AEW debut to a huge reaction from the crowd.

Bless Chris Jericho. The sure-fire future hall of famer was the best choice to be the first AEW World champion. But what was most incredible is that some how, some way, Jericho got his new finisher, the Judas Effect, over as a devastating finisher. When he drilled “Hangman” Adam Page with it during the main event, the crowd reacted like Page had just been shot.