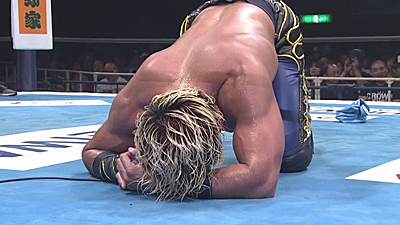 After Night 13 of the G1 Climax tournament only five superstars remain in contention as the competition in A Block was whittled down by exactly half.

Thinking quickly on his feet, Ibusho rolled out of the way of Hiroshi Tanahashi’s High Fly Flow in their match-up. Blood dripping from his mouth Ibushi landed a Bomaye for a two count. A jaw-cracking Kamigoye pinned Tanahashi.

Sanada earned a very emotional win over Kazuchika Okada giving the champ his first loss of the tournament. Sanada got the pin with two moonsaults off the top rope with less than 10 seconds left on the clock in an incredible match, victory.

Bad Luck Fale scored his second win of the tournament when Kenta is distracted by Jado and rolled up by Fale.

Will Ospreay Versus Evil

Evil dumped Ospreay with Everything is Evil.