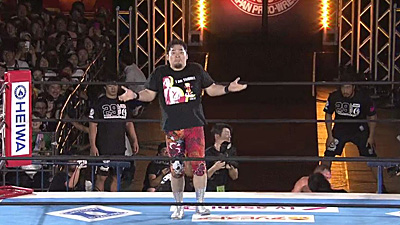 Sneaky Style has played spoiler once again. Toru Yano, the Sublime Master Thief of NJPW, bamboozled Jon Moxley to hand him his first loss of the G1 Climax tournament and his first ever loss in NJPW.

Yano was up to his old tricks even before their match began. Yano infuriated Moxley by spraying him in the face with a bottle of water from the arena floor.

A furious Moxley cocked his fist back. Yano got on his knees and prayed in the middle of the ring for forgiveness from the Deathrider. Moxley caught Yano trying to crotch shot him. Yano ducked a punch, crawled across the ring to retrieve one of his DVDs.

“This is for you,” he said to Moxley holding it out to him.

Moxley kicked the DVD into the air. He battered Yano with forearms to the jaw. Moxley raised his fists again.

“Sorry. Sorry. Sorry,” cried Yano backing into the safety of the ropes. Yano did his trademark “Break! Break!” chant with the crowd.

Moxley slapped him in the face. Yano rolled out of the ring to the floor holding his cheek. Moxley savagely crawled at Yano’s face on the floor. Yano reversed things, threw Moxley into the ringside barrier, grabbed a roll of tape from under the ring hiding it in his trunks.

Yano gave Moxley a really weak atomic drop on the floor. Moxley escaped being taped up by Yano. He taped Yano’s arm to the ringside barrier instead. Moxley slid back into the ring while the official laid down the count.

“S—t!” grumbled Yano unraveling the tape as fast as he could.

Yano beat the count back into the ring but not by much.

Yano pleaded with Moxley saying it was all a mistake. He offered to shake his hand.

As they shook hands, Moxley and Yano grabbed each other’s hair. They broke apart each heading into their corners to untie a turnbuckle pad. Yano and Moxley swung the buckles at each other until the official pulled away Moxley’s. Yano punched Moxley in the groin rolling him up. Moxley kicked out. Yano was whipped into one of the exposed turnbuckles. A Regal Knee knocked him out of the ring.

Moxley pulled a table out from under the ring leaning it up against a ringside barrier. He rammed Yano’s head into the table over and over again. Yano’s head hit it with a hollow thud each time. Yano pushed a Young Lion into Moxley and low-blowed them both. Acting quickly, he taped both their ankles together. Moxley struggled to his feet attached to the Young Lion but couldn’t drag him into the ring. He was counted out.

Moxley now leads B Block with 10 points. Due to the results of Night 12, Taichi and Shingo Takagi have no chance at winning the block and are, for all intents and purposes, out of the tournament.

In a battle of the bruisers, Cobb takes the two points with a Tour of the Islands on Shingo.

Naito has been charging ahead lately and earns another win with Destino.

It was an absolute war but Goto eventually wins with the GTR.

Suzuki-gun (Minoru Suzuki and Zack Sabre Jr.) beat Suzuki-gun (Yoshinobu Kanemaru and Lance Archer). The Most Electrifying Superstar in Sports Entertainment today pinned Kanemaru. Sabre Jr. and Archer argue. Archer tells Sabre Jr. he is going to break him in half in their upcoming G1 match.