Brian Shields created the Legends of Wrestling video-game franchise, worked with Ric and Charlotte Flair on their dual-memoir, Second Nature, and soon will be honored by the George Tragos/Lou Thesz Pro Wrestling Hall of Fame.

For the lifelong wrestling fan, receiving the Jim Melby Award from the Waterloo, Iowa,-based hall of fame and museum is an “indescribable” honor. The award, named for the wrestling historian and magazine editor, recognizes “excellence” in writing or historical documentation of the wrestling industry. Shields joins the likes of Larry Matysik, Dave Meltzer and George Napolitano in receiving the honor. 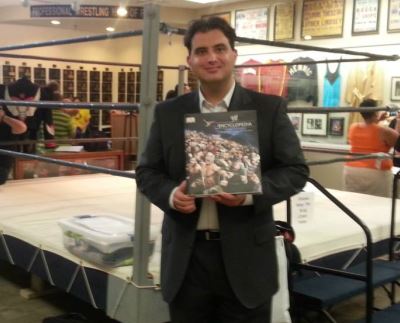 Brian Shields with the WWE Encyclopedia in the George Tragos/Lou Thesz Pro Wrestling Hall of Fame in 2013.

Shields’ journey to writing about the wrestling industry originated in the gaming world. He interned with Acclaim Entertainment’s sports marketing division in 1998 and worked his way up to become a marketing coordinator, where he played a supporting role with the creation of the company’s WWE products.

Acclaim was the first company to garner WWE’s video-game license for home gaming consoles and in 1998 launched WWF War Zone for Sony Playstation and Nintendo 64. In a world that combined his passions for marketing and business, Shields saw first-hand the business side of WWE until the company’s relationship with Acclaim ended in 2004.

“At that time in 1997, ’98, that kind of capability was a huge deal and the War Zone video game was one of the products that really set a standard at that time for wrestling video games,” Shields said.

In addition to its work with WWE, Acclaim produced two games for Extreme Championship Wrestling. Though ECW folded in 2001, Acclaim had spent “millions of dollars,” according to Shields, on developing a line of PlayStation 2 games for the company. So Shields reintroduced a concept that had been tossed around in the past, and the result was Legends of Wrestling. The franchise would focus on stars who were not under contract to WWE, WCW or ECW, along the lines of EA Sports’ Knockout Kings franchise.

“That kind of got the attention of, not only the video game business, but sports marketing business in general and probably WWE to a degree because it showed that there was a real interest in nostalgia products,” Shields said, “and after I left Acclaim, WWE became my first client.”

Jimmy Snuka, Ricky “The Dragon” Steamboat, Greg Valentine and Jimmy Hart appeared in the inaugural Legends of Wrestling game. Hulk Hogan was announced as the game’s official spokesperson in September 2001.

“We just had a game concept that people really fell in love with that they wanted to see succeed,” Shields said.

However, without the help of Terry and Dory Funk Jr., Legends of Wrestling would not exist.

“The Funks were two of the first people I contacted to see if they would be interested in the game,” Shields said. “King Kong Bundy was also one of the first. Both Terry and Dory were putting in some calls for me. I was calling the talent directly and working with these incredible legends myself. So they were huge helps in just kind of setting the table and getting people to understand what Acclaim was doing.”

As Shields became more ingrained in the wrestling world, he connected with Jim Ross and WWE executive Mike Archer — a key player in Acclaim’s WWE relationship — in the early 2000s to create what ultimately became the WWE legends program.

“In 2004, I was invited to a meeting with Mike and Jim Ross at WWE’s Stamford, Conn., headquarters. They were working on creating a program that honored WWE and sports-entertainment legends that included officially licensed WWE products,” Shields said. “I worked with them on building out the product offerings for WWE’s licensees and signing the talent. It is a highlight of my career — and the way I began writing for WWE.”

At the time, the focus was on creating “comprehensive consumer products” that re-introduced legends and hall of famers to younger audiences. The first items to hit shelves were Smackdown v. RAW video games and JAKKS Pacific action figures.

“That was just an amazing experience to talk to Jim about the greatest of the greats from pro wrestling past,” Shields said, “and if you go back and look at that line, Bruiser Brody is in that line. Wrestlers from all wrestling promotions, even though Brody did wrestle in WWE in the ’70s, not just wrestlers who made their biggest mark in the industry in WWE. That was the first time I worked with WWE in a significant way, and that really paved the way for me to start writing.”

Ross and Archer later reached out to Shields to gauge his interest in writing biographies for the company’s stars. Following positive feedback from that project, in 2005, he was asked about working with Simon and Shuster on a book about WWE in the 1980s. A couple years later, he got another call, this time about the WWE Encyclopedia.

Shields’ relationship with WWE continued to evolve, and in 2015, he received a “high-concept document” from WWE about a dual memoir with Ric Flair and his daughter Charlotte (real name Ashley Fliehr), a former WWE Divas and Women’s champion. The former video game marketer ultimately was selected from a pool of writers who met with the Flairs to present their book concept. Getting the call that he would be working alongside the Flairs to help pen their memoir was a “proud moment” for the New York native.

“I knew that it was going to be a very high-profile project because of Ric and Charlotte, and I didn’t want to let them down or let the WWE or the fans down,” Shields said. “And it’s a great responsibility to work among these kinds of projects.”

The book was published with much media attention in 2017. 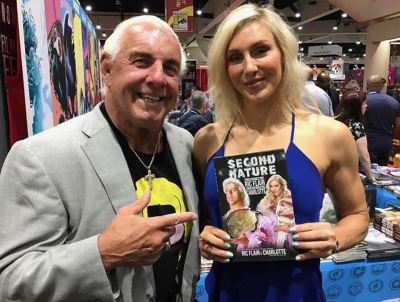 “Ric and Charlotte were very clear at the beginning that they wanted this book to be real. They wanted this book to be about their lives personally and professionally — not only the ups and downs as individuals, but as father and daughter,” Shields said. “So they told me right away that this was going to be a project that was going to be very close to them and mean a lot to them.”

“It was a project where we were really a team working on this together,” Shields said. “[It’s] not something where I’m writing in a silo somewhere, and they’d see it once or twice.”

Going forward, Shields has other projects in the works that he is not yet able to speak publicly about. Still, he said he looks forward to returning to Waterloo, Iowa, for the hall of fame weekend. He last was at the museum in 2013 when he presented a session on the history of WWE.

“You walk into the museum and Hall of Fame and right away you’re just — as someone who grew up a wrestling fan — you’re just immediately taken into this other world,” Shields said. “So when I think of these things together, it’s very difficult for me to describe how much this honor means to me.”