It was pure luck, and John Cosper is not going to call it anything else. While working on an earlier book, he became interested in the career of “Black Panther” Jim Mitchell, a worker from the 1930s to the 1950s. He shared his interest publicly, and then, through his website, he was pointed to a man who bought Mitchell’s home — which included tons of personal papers and memorabilia.

What had been an interesting topic, a book Cosper could only muse about completing, became something completely different once he got his hands on Mitchell’s personal letters, photos, posters, wrestling boots. 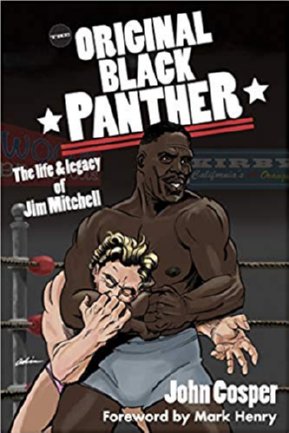 “I had a guy reach out to me through my website, and said, ‘Hey, my buddy bought Jim Mitchell’s house after he passed away. You need to talk to him.’ He had saved everything he possibly could,” recalled Cosper at the 2019 Cauliflower Alley Club reunion in Las Vegas, his first trip to the annual event. “It’s one of those amazing finds. The guy was not a wrestling fan. He just bought the house as a fluke and just had it, ‘You know what? This might be valuable some day.'”

It’s not everything, though, said Cosper, wondering what goodies he missed out on. “He said he tossed about two-thirds as much, this was a third of what he found, but everything was so water-damaged from being in the basement for so long.”

That first book, Bluegrass Brawlers: The Story of Professional Wrestling in Louisville, published in 2014, tied into Mitchell, since the Black Panther, trained by Jack Reynolds, was originally from Louisville, Kentucky.

At his website, eatsleepwrestle.com, Cosper blogs about pro wrestling, promotes his books, and details future projects, including Tracy Smothers’ autobiography and a book with Hurricane JJ Maguire, who Cosper likes to call “the Bernie Taupin to Jimmy Hart’s Elton John. They were the guys that wrote all those theme songs back in the day.” It’s all a sideline to his day job, selling metal siding and roofing, and his primary concern, his wife and kids.

Given the treasure trove of Mitchell info, Cosper built around it with research, particularly at Newspapers.com.

“It’s an untold tale, and it’s a guy who was forgotten, not because of anything he did, but just because he was the pre-TV era. The narrative was always Bobo Brazil was the guy that broke the colour barrier, but when Mitchell, Jack Clabourne, and guys like that started out in the 1930s, they were so scattered, they couldn’t segregate wrestling. Mitchell was wrestling other white wrestlers from the very beginning, never really had much of a colour barrier issue — never traveled far down south where it would have been more of thing. He was a pioneer. He was a main event star. He traveled to Europe, Canada, Australia, all over the country. He feuded with Gorgeous George, Gene Stanlee, Antonio Rocca and all the biggest stars of his day.”

One of the more recent big stars took an interested in the project, with “The World’s Strongest Man” Mark Henry providing the foreword and pushing the book.

“I got to sit down with (Mark) back in November and show him the memorabilia I’ve been showing everybody (at CAC), and he was just blown away by the story,” recalled Cosper. “He said he was actually upset that he’d never heard this guy’s name. ‘This was a guy, he was a real pioneer.’ Mark’s got a love for the history of wrestling, especially African-American athletics and stuff. He was like, ‘Anything you need,’ and he’s been a great supporter.”