I was spoiled growing up as a wrestling fan. I had the late, great Gorilla Monsoon and Bobby Heenan on commentary. It really doesn’t get much better, hasn’t gotten much better than that.

These days, the level of WWE commentary is the lowest it has have ever been since Vince McMahon shared the desk with a host of rotating colour commentators. 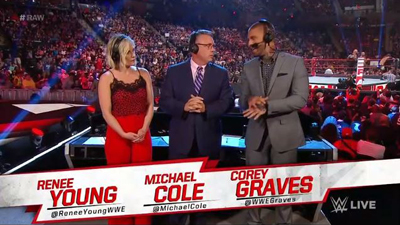 Nigel McGuinness, Mauro Ranallo and Tom Phillips are the best the WWE has right now. Vic Joseph and Beth Phoenix are nearly there; in fact I am not sure why the WWE doesn’t replace Renee Young with Phoenix, who has proven she has the skills to do so since evolving and growing with her duties on NXT.

The lead announce team is not representing the WWE brand, its flagship show or its pay-per-events very well. 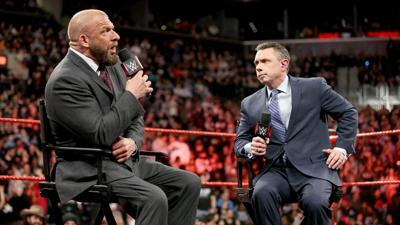 Firing on all cylinders, keeping his foot on the gas while keeping his head on a swivel is Michael Cole. Photo: WWE.

Michael Cole has become a solid anchor for the team but he has become too comfortable in his role. He recycles many of the same catch-phrases, turns of phrases nowadays. He needs a fire lit under him like when he did a phenomenal job announcing the United Kingdom Championship Tournament. 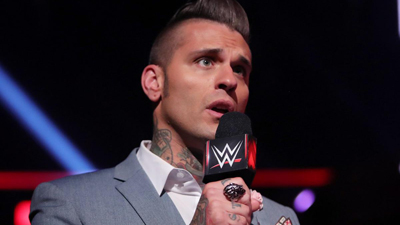 Does Graves have Socknaphobia? Photo: WWE.

Corey Graves has fallen from grace and it is not just the skinny hipster suits that make him look like Don Johnson from Miami Vice that are the issue but while we are on the topic, get Mella to buy you some socks for crying out loud. Graves is a shadow of what he once was. The creativity, imagination he used to have has been completely sucked out of him. He used to stand out. Now, he is just a generic announcer who could be easily replaced by anyone except maybe David Otunga. 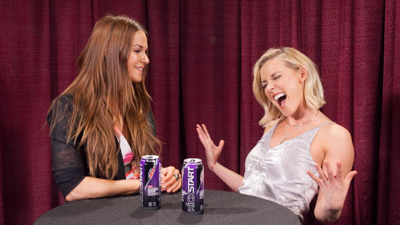 Renee is wearing white in this photo. Photo: WWE.

Renee Young’s contributions amount to oohs, ahhs, completely obvious statements (Nikki Cross is supporting her friend at ringside!) or she just expands upon or repeats what Graves and Cole already said, not providing many of her own insights. Phoenix should take her spot or the WWE should just go back to having two announcers. With three they just end up talking over each other most of the time anyways.

It isn’t even the overall delivery that’s the problem. It is that a lot of what they say either doesn’t make any sense at all, is completely inaccurate or doesn’t support the current storyline.

As an example, let’s take a brief look at their commentary during the Becky Lynch and Seth Rollins versus Baron Corbin and Lacey Evans match at Extreme Rules.

Cory Graves: “It is amazing how much more in love you can be when everything is going right in your life.”

John Powell: The true test of a relationship is when times get hard. Couples suffer setbacks all the time and a crisis brings people together. Most couples weather the storm coming out stronger than ever before. If Seth and Becky were to break up because they lost their belts they wouldn’t be much of a couple to begin with would they?

Renee Young: “The one thing about the Sassy Southern Belle is that she has never been in an Extreme Rules match-up. She is out of her depth completely. She doesn’t know what she is doing.”

John Powell: Just a month prior to Extreme Rules, Lacey Evans fought Becky Lynch in a Street Fight for the Raw Women’s Title. In her career, Lacey has fought in numerous triple threats, four way matches, six battle royals and in the Royal Rumble. While they may not technically be “Extreme Rules” matches to say Lacey, a former military SWAT officer, is “out of her depth” in no holds barred matches is ridiculous.

Cory Graves: “Seth’s focus is not what it once was.”

John Powell: Since revealing he is in a relationship with Becky Lynch, Seth Rollins has wrestled 44 times. He has won 42 of those matches. His focus seems fine to me.

Cory Graves: “You throw love and feelings into the mix and it changes everything.”

John Powell: Since revealing she is in a relationship with Seth Rollins, Becky Lynch has wrestled 34 times. She has won 32 of those matches. Despite losing the WWE SmackDown Women’s Title to Charlotte Flair at Money in the Bank, that is quite a win-loss record.

John Powell: Except when Becky kicks a chair into Corbin’s face, Lacey hits Seth with a kendo stick and Corbin gives End of Days to Becky. Based on the rules, all of those should have been disqualifications.

Renee Young: “You have to wonder what kind of things Corbin and Lacey have up their sleeves given the stipulation of this match.””

John Powell: Did Renee miss all those times Seth Rollins has battered superstars with steel chairs lately just for even speaking about being a special guest referee but Corbin and Lacey might use the rules to their advantage?

Renee Young: “You have to be impressed with the chemistry between Seth and Beth (?) now. People have been questioning it online. Fans have been wondering about these two but they are firing on all cylinders.” 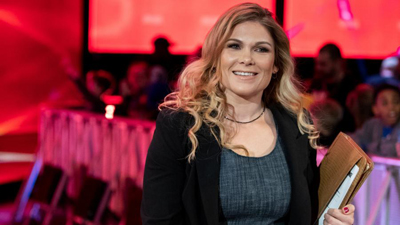 Beth is getting better and better. Photo: WWE.

Cory Graves: “I am not the only one. Don’t try and vilify me.”

John Powell: Renee just said many people have been questioning the chemistry which makes Cory’s earlier response about being singled out totally incomprehensible.

Cory Graves: “When Seth and Becky come up short tonight … they are definitely going to break up. There will be a professional divorce. They won’t want to be around each other.”

John Powell: According to Cory’s logic if either of them loses their titles they won’t be a couple anymore? Their relationship hinges on them being champions? What?

Putting someone through a table is not “extreme.” Whether someone is slammed on or through the announce table or a regular table it literally happens all the time on WWE television.

What the boomer WWE bookers and announcers don’t seem to understand is that the inaccuracies like those above really stand out in an age where any statistic, any fact can be looked up in mere minutes to verify its accuracy. This is an era in which fans are more often than not aware of a wrestler’s background, their history and experience so ignoring Lacey’s military background won’t fly with them. Pretending a superstar’s time in NXT is inconsequential is also absurd.

The lead announce team ineptness is more about the constant faulty logic and bizarre statements like Corey’s above about being “singled out.” It makes you wonder if the trio are actually listening to each other, really playing off each other as Monsoon and Heenan used to do so well. The WWE has made a lot of changes lately to their booking teams, to how their roster is utilized on both brands. It is now time to review the lead announce team and make some much needed changes there too.