Book excerpt: 100 Things WWE Fans Should Know & Do Before They Die

Thanks to the good folks at Triumph Books, we are presenting an excerpt from Bryan Alvarez’s new book, 100 Things WWE Fans Should Know & Do Before They Die.

The book, released in July 2019, comes with this description:

Covering the most charming babyfaces and hateable heels, the high-flyers as well as the hardcore heroes, this comprehensive, authoritative book explores the personalities, events, and facts every WWE fan should know. Dive into pro wrestling history with indispensable information on iconic matches, behind-the-scenes business, unforgettable feuds, and outstanding feats by superstars like Stone Cold Steve Austin, The Undertaker, John Cena, Ric Flair, Shawn Michaels, and Bret Hart. Whether you had the privilege of witnessing the glory days of The Rock, or are a more recent fan of Daniel Bryan or Sasha Banks, this is the ultimate guide to what goes on inside and out of the ring. Bestselling author Bryan Alvarez (The Death of WCW) has collected essential knowledge, trivia, and must-do activities and ranks them from 1 to 100, providing an entertaining and easy-to-follow checklist as you progress on your way to fan superstardom. 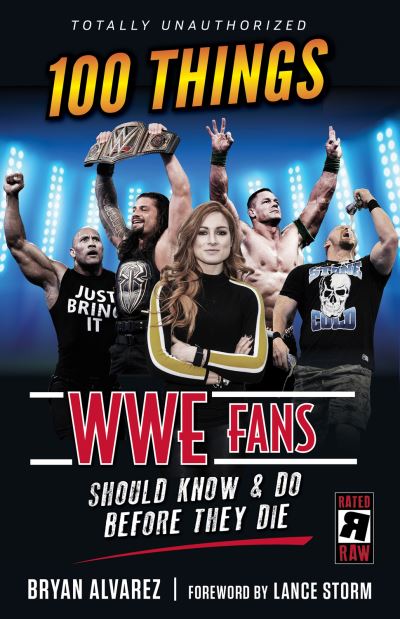 Alvarez himself is a former professional wrestler, and he has been the editor and publisher of the Figure Four Weekly newsletter since 1995, which is now part of Dave Meltzer’s Wrestling Observer. He hosts numerous radio shows, such as Wrestling Observer Live and Figure Four Daily, and is the coauthor of the best-selling classic The Death of WCW with RD Reynolds.

The foreword is written by Lance Storm, and before we get to our chosen excerpt, we’ll let him set it the premise of the book a bit more.
“While the title is pretty self-explanatory, I don’t think it conveys the true extent of this book’s usefulness. For a current WWE fan (or pro wrestling fan in general), it is both an amazing learning tool for things you need to know as well as a great bucket list of things you need to do,” wrote Storm. “The things to know will allow you to understand the history of the industry and its important figures without having to devote the majority of your life to reading 100 different biographies and history-of-wrestling books.”

Given the choice of an excerpt, we settled on a piece that is near and dear to many of the people behind the SLAM! Wrestling website itself.

WrestleMania VI, held on April 1, 1990, in Toronto’s SkyDome, is hardly a legendary WrestleMania, but it was headlined by a very famous match. You could almost say I am including it here for selfish reasons, since it was the first WWF PPV that I successfully convinced my parents to order.

You wouldn’t be wrong.

When Nitro premiered, I was 20 years old.
When Steve Austin won the WWF title, I was 22 years old.

In other words, during the hottest era of pro wrestling in this country’s history, the average wrestling fan was…me. Which means, in my opinion, that to the vast majority of fans who carried wrestling through the Attitude Era boom period, WrestleMania VI was a damn big deal to them, and the Ultimate Warrior vs. Hulk Hogan was the biggest match of their childhood.

I loved the match. The last time I watched it, all things considered, it was still a pretty decent match. That is a minor miracle, because neither Hogan nor the Ultimate Warrior were known for having good matches, and the two of them together sounded like a recipe for disaster. But they scripted the match out move-for-move, practiced it several times prior to performing it, and when I watched it live as a starstruck 14-year-old—man, it was the most awesome thing ever. In some ways, you’re reading this book right now because of that match.

Unlike today, where WWE builds up matches by having the two guys in the main event lose to each other on RAW or SmackDown repeatedly, the Ultimate Warrior vs. Hogan was the unstoppable force meeting the immovable object. Hogan had not been pinned clean since he returned to WWF in 1983. The Ultimate Warrior virtually never lost, and his most recent defeat, at the prior year’s WrestleMania, was the result of his opponent Rick Rude’s manager, Bobby Heenan, holding his foot down for the pin. The Ultimate Warrior regained the Intercontinental title at SummerSlam, so WrestleMania VI was WWF title vs. Intercontinental title. One of these behemoths was going to beat the other and leave with two belts. A young brain could hardly comprehend these ramifications.

The Ultimate Warrior won an epic battle when Hogan went for the Legdrop of Doom; in a stroke of genius, the Ultimate Warrior, like, moved, then hit his finish, the big splash, for the pin. It sounds goofy. To 14-year-old wrestling fans everywhere, it was the biggest moment in the history of sports.

The idea at the time was that the Ultimate Warrior would be Hogan’s successor. Long story short, he wasn’t. Historically, when a wrestling promotion successfully replaced its top star, it would do so with someone completely different than his predecessor. That was not the case with Hogan and the Ultimate Warrior. Even worse, even though Hogan’s job was to put the Ultimate Warrior over, he manipulated the fans in such a way that they felt more sympathy for him as the longtime champion who lost, rather than celebrating the Ultimate Warrior’s victory. WWF gave up on the Ultimate Warrior in less than a year and switched the title to Sgt. Slaughter, who was doing an incredibly tasteless Iraqi sympathizer gimmick to generate heat based on the Gulf War. It was all a setup for the American hero, Hulk Hogan, to beat Slaughter and regain the title at WrestleMania VII.

WrestleMania VI was the Ultimate Warrior’s peak. He had a very volatile relationship with Vince McMahon, and by the end of 1992, he was gone. He returned very briefly in 1996 with the idea that he’d get a gigantic push, but only lasted about three months before another falling-out. He was hired by WCW in 1998, where he proceeded to have two of the worst PPV main events in history, a War Games match and a rematch with Hogan. Then he disappeared again (coincidentally, his WCW gimmick included the ability to, no joke, magically appear and disappear in a cloud of smoke). Aside from a single match in 2008, that was the end of his pro wrestling career.

In 2013, the Ultimate Warrior, real name James Hellwig, opened up a new relationship with WWE which saw him inducted into its Hall of Fame the following year. Despite the fact that during his downtime he’d maintained a controversial blog where, among other things, he had gone on hate-filled rants about homosexuals, celebrated the death of Heath Ledger, celebrated Bobby Heenan’s cancer diagnosis, and ridiculed those affected by Hurricane Katrina, he was not only pushed as an all-time legend but they even created a “Warrior Award” given annually to those who “exhibited unwavering strength and perseverance, and who lives life with the courage and compassion that embodies the indomitable spirit of the Ultimate Warrior.”

The Ultimate Warrior was inducted into the WWE Hall of Fame on April 5, 2014. The next day he appeared at WrestleMania XXX. The day after that he made his first RAW appearance in 17 years. He cut a weird promo, almost a eulogy to himself. People backstage said he appeared frail and was breathing heavily and sweating profusely. The next day, after attending the full WrestleMania weekend, I was boarding a flight from New Orleans home to Seattle. Just as the flight was about to take off, I got a text that said something to the effect of “Warrior died.” I was floored. It was hours before we landed and I was able to get the news. The Ultimate Warrior had been walking from his hotel to his car that afternoon, clutched his chest, and died of heart failure. He was 54 years old.

EDITOR’S NOTE: This excerpt from 100 Things WWE Fans Should Know & Do Before They Die by Bryan Alvarez is printed with the permission of Triumph Books. For more information and to order a copy, please visit www.triumphbooks.com/100WWE.