There is no question that Booker T is one of the most decorated and unique wrestlers that has ever stepped into the squared circle. Even though the WWE Hall of Famer is no longer an active athlete, he does make an appearance on the WWE kickoff show for most pay-per-views. But when he’s not sitting on a panel, he’s running his own wrestling school called Reality of Wrestling in Houston, Texas. Although he claims that they are the “raga-muffins no one knows about,” that’s going to change.

Reality of Wrestling is partnering with IMPACT Wrestling for Deep IMPACT, which will air on Twitch on Saturday, July 6. Booker is excited to showcase his students to the fans, in a time where wrestling is at its highest point. 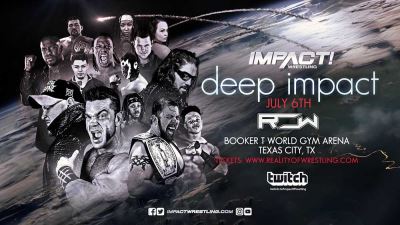 “I like where the careers of some of these young guys are going to go. The door seems to be open wherever you go,” Booker T said on IMPACT Wrestling Press Pass Podcast. He added that this opportunity would allow them to potentially collaborate in the future. “What’s also great is that the fans are also going to get a really good product, so it’s a win-win situation.”

There will surely be some fierce competition between these two promotions, but it seems like a contest has already begun between the students of Reality of Wrestling. “Only the best talent get to go out and compete with the best talent,” he continued, “it keeps my guys on their toes and everybody is hungrier now than they’ve ever been.”

When it comes to recruiting athletes for Reality of Wrestling, Booker said you can’t judge a book by its cover. He’s worked with so many young grapplers over the years and you can’t expect that they can all do the same things. “I do stress to all of my students that this business is not a game. It’s not playtime. You can’t show up unprepared, you just have to go out there and study,” Booker T said sternly. This sport takes a lot of discipline and you have to be prepared to do everything you can to get yourself to the next level. “I tell them to look in the mirror, because the one thing you can’t do is lie to yourself.”

Since Deep IMPACT will take place on the eve of IMPACT’s Slammiversary pay-per-view in Dallas, Booker did reveal whom he is most excited to see in the ring. “My friend, Rob Van Dam, is going to be out there doing his thing like he’s always done before.” He said RVD’s staple is to use the element of shock during his performances so he expects nothing less from him.

Booker T is also interested in seeing what IMPACT’s Moose will bring to the table. “He’s got a lot of talent and I can see him going up against one of my young guys and they’re just going to rock it.”

The transition to becoming a promoter can often be hard for some wrestlers, but not for Booker T. “When I was wrestling we had a promoter by the name of Paul Boesch. I basically used a blueprint of how he worked for my own business.” Boesch was a professional wrestler, announcer and promoter out of Houston.

Although it seems to be working for him, Booker admitted that there are some things he had to learn over time. “The wrestling style has changed and will continue to change. The one thing I always want to do is give the [fans] what they want.”

He added that wrestling is more than just a sport for the athletes and the fans. “They come to see a show, not just wrestling. It’s a thrill ride.”

Aside from doing the day-to-day work for Reality of Wrestling, the former WCW World champion said that he’s appreciating his life out of the ring. “A lot of guys want to [wrestle] forever and don’t know how to step outside and enjoy the fruits of their labor.” He’s been able to enjoy a round of golf and spending time with his two children. “With being able to do the kickoff shows with the WWE, I feel like I have the best of both worlds.”

When asked if he would ever step back into the ring and the tender age of 54, he didn’t rule it out. “Being in the ring with my students makes me always prepared for anything. At this point, I’ll leave it at never say never.”

Tickets are still available for Deep IMPACT on July 6 in Houston. Visit Reality of Wrestling’s website for all the details on how you can attend the show or watch it online on Twitch.