A question many wrestling fans think to themselves is, “What if I became a professional wrestler?” It’s a dream that few actually realize. Luckily, there is a way to see what becoming a wrestler for a few days is really like, thanks to the comedic duo of Kenny Hotz and Spencer “Spenny” Rice. These two Canadians were the stars of a hit TV show called Kenny vs. Spenny, and they both got to try their luck at pro wrestling during the show’s fifth season.

The show pitted the two best friends in a series of competitions to see who was better. The show’s various battles in the past have included, “Who can drink more beer?”, “Who can blow the biggest fart?” and “Who can wear a dead octopus on their head the longest?” just to name a few. 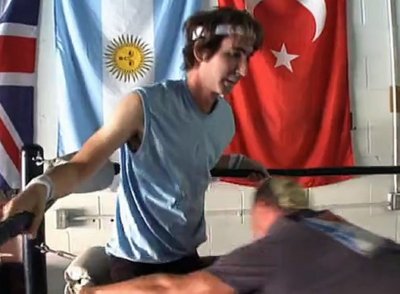 Spencer “Spenny” Rice in the ring.

When it came time to come up with new competition ideas, Spenny — himself a huge professional wrestling fan — came up with the idea to determine which of them was better in the ring.

According to Rice, the entire episode was shot in three days, two of which were spent training for an actual wrestling match against a real professional wrestler. During the shooting, Spenny devoted much more to his wrestling “match” than Kenny. Since Kenny and Spenny couldn’t wrestle each other, they were each paired with a real pro wrestler. In Spenny’s case, he faced noted Canadian wrestler Tyson Dux.

“I’m very proud of myself for having done this,” Rice recalled to SLAM! Wrestling. “It was great working with Tyson. We’ve even continued our feud on the independent scene for some time and I’ve gotten to work some independent shows with him.”

Spenny’s experience training in the ring exposed him to the kinds of physical pain wrestlers endure for the fans. Despite being completely untrained, Spenny got himself chopped in the chest which, in his own words, “stung way more because I had hair on my chest.” As if that pain wasn’t bad enough, Spenny the wrestling fan also bladed in his “match” with Dux, and gave interesting insight into what that practice feels like.

“Your adrenaline is running so it feels mostly painless, but it pops the audience. I was told to take aspirin before the match to thin my blood but I forgot to. Yet everyone watching said I ‘bled very well,'” he said.

The actual match with Spenny — wrestling under the ringname “The Nice Guy” — against Dux was a slow and simple affair. Of course, this is exactly what you’d expect when an untrained person enters a wrestling ring, and only further highlights how much training actual pro wrestlers do to make the action look both realistic and exciting.

Aside from showing exactly how “well” a wrestling match would go if a fan stepped into the ring, this episode of Kenny vs. Spenny is also famous for a cameo appearance by The Iron Sheik. Sheik’s first appearance was to give Spenny a pep-talk, which soon transformed into the usual (and always hilarious) expletive-laced Sheik rant.

Later on, after Spenny (spoiler alert) lost the competition, Sheik returned to be a part of Spenny’s show-closing humiliation. That segment included one moment during which Sheik tried to sodomize Spenny with a beer bottle, but Spenny escaped. “I wasn’t warned about that. It just sort of happened.”

Spenny was also candid about his wrestling memories, and reminisced about his younger days watching wrestling matches live in Maple Leaf Gardens and in Buffalo, NY.

“The Sheik [Ed Farhat] is my all-time favorite wrestler. I loved the way he carved people up. I felt genuine terror watching him when I was young,” he recalled.

Interestingly, Spenny also spoke about what turned him into a lapsed wrestling fan. He admitted he doesn’t watch much wrestling anymore; not only because of his own business and personal commitments, but also because he misses certain elements of a bygone era. Spenny prefers the days when wrestlers had managers, and larger-than-life characters like The Honky Tonk Man were the norm.

He also mentioned a specific element to today’s wrestling shows that to him, took the magic away from feud-building. Echoing something Jesse “The Body” Ventura once said, Spenny noted, “The wrestlers used to build up a match by having separate interviews away from each other. Now, they all walk into the ring and play up some angle. Just like that, the excitement and anticipation to see these guys fight is gone. It just doesn’t work for me.” 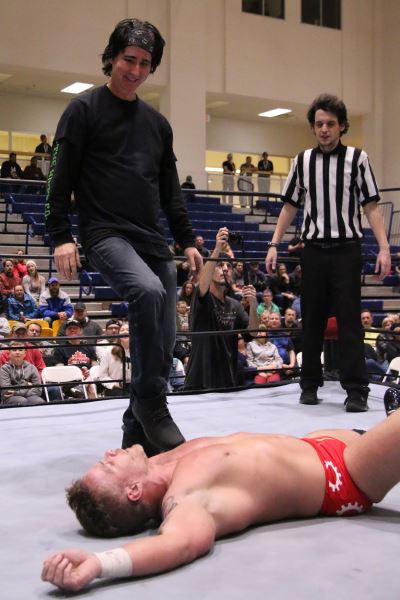 These days, Spenny spends a lot of time touring for various projects. He and Kenny have gone on a Kenny vs. Spenny tour to many countries, most recently in Germany, to talk about their experiences making the award-winning show. Spenny is also still actively involved in music, and travels Ontario performing at private gigs and shows.

He will also be a part of a big wrestling show and convention presented by Chinlock Wrestling in Kingston, Ontario, on June 15th. On top of Spenny’s involvement, that show will include legends like Tommy Dreamer, Mark Henry, Arn Anderson, Tully Blanchard, Billy Gunn, Bret “The Hitman” Hart, and more. All proceeds from this event will be going to charity.

After years of being taken down, all of the show’s episodes — including the ‘pro wrestler’ episode — can be found on Kenny’s YouTube channel.