Breznikov’s book comes from the heart of a fan

It took a couple of tries before Nikita Breznikov was able to convince Scott Teal of Crowbar Press that his book, When It Was Real, was worth adding to the lengthy list of books from the publisher.

The issue was that it was not a traditional autobiography, even if Breznikov was in the wrestling business for a few years as the manager of the late Nikolai Volkoff on the indy circuit. 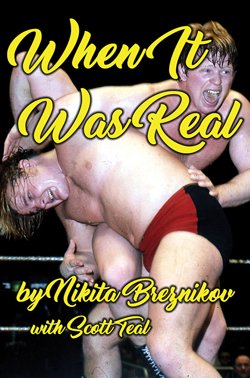 “It took me a while to get Scott Teal to get behind it, because at first, he’s like, ‘We don’t need another This Day in History. We’ve got a thousand of those.’ It was like, ‘Scott, please, just look at it.’ It took me three strikes and I finally got him,” recalled Breznikov (real name John Kruszewski) at the 2019 Cauliflower Alley Club reunion in Las Vegas, where he was selling books at the Crowbar Press table.

Instead, it’s a book “coming from the heart of a fan,” said Breznikov. He was a wrestling fan of the World Wide Wrestling Federation and his writing details from 1970 to 1979.

“The reason I call it When It Was Real is because we believed. Yeah. yeah. people told us it’s this, it’s that, it’s like, ‘I don’t care. I want to enjoy it.’ It was presented as legitimate sport. Not knocking anybody, what they do now, whatever, beautiful, enjoy it. But that, to us, was our life. We didn’t watch it, we absorbed it. We’d go to watch a one-hour television show, that’s all we had, and then every month, it would be at the arena. Every month would be Christmas. And for a kid like me, I was a severely abused child, they saved me, and I emulated them, the athletes, I wanted to be like them, I didn’t do nothing bad, no drinking, and I stayed good. In fact, I went on to have a career as a policeman, and it was because of those guys. Men and women followed them and loved what they did.”

Kruszewski did grow up to become a police officer, in Baltimore, and also dabbled in pro wrestling himself, occasionally as a wrestler, but mostly it was about his friendship with one of those he watched on TV in Volkoff. Many at the CAC asked about Nikolai and his passing on July 29th. At his first CAC, Breznikov said that his former charge was there too. “He’s here, his spirit is here, without a doubt, and that’s the greatest thing we can do on this Earth, is we leave a good legacy that people talk about us, and they smile when they remember us.” 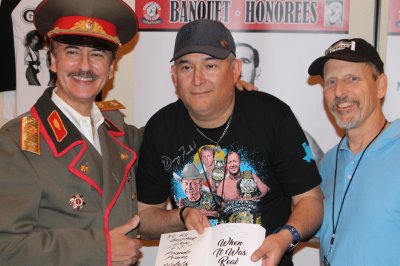 With When It Was Real, Breznikov’s own legacy has expanded beyond ringside. “Author Nikita Breznikov tells the story from two perspectives — that of a starry-eyed fan, and as the manager and tag team partner of the legendary Nikolai Volkoff. Nikita details the matches and feuds that took place during the ‘70s and gives his insightful, often-hilarious perspective of the events that took place,” reads some of the promotional material for the book. “Escape with Nikita as he transports you back to an era when wrestling was presented in an entertaining manner, but framed as legitimate competition. Escape once again as we did back in the day.”

He credited Teal, once he was convinced that it was a good project, with making it all work. “I call him the Maestro. I gave him the lyrics and he put the music to it,” said Breznikov, who also dabbles in acting. “I gave him 520-some pages that he took the meat cleaver to and fixed it up, and made it chewable.”

It is necessary to note that Breznikov’s goal is not to disparage wrestling today. He respects the wrestlers and fans in the game today. But he longs for the way it was. “We cared. You hurt Bruno or Chief, you were hurting our family, and we took it seriously and personally. I mean, that’s it, that’s my book, you’re looking into my heart and soul, what I still live to this day, and fortunate enough to be a part of it. but I’m happy that I was a kid then. I’m glad I wasn’t in it. I’m glad that I enjoyed it that way.”