I have no illusions of grandeur. No WrestleMania main event awaits me. I will not go sixty minutes against a talented foe in a pay per view title fight shrouded in mystery, spectacle or long term plans for a multi-match program.

No, in fact my performance will be brief. I didn’t make the poster. I don’t have expectations to win against more seasoned performers. And I don’t have rippling biceps or a catchy theme that includes a funeral bell or anyone proclaiming me to be a “sexy boy.”

But regardless, this is for all intents and purposes, my “WrestleMania moment.” 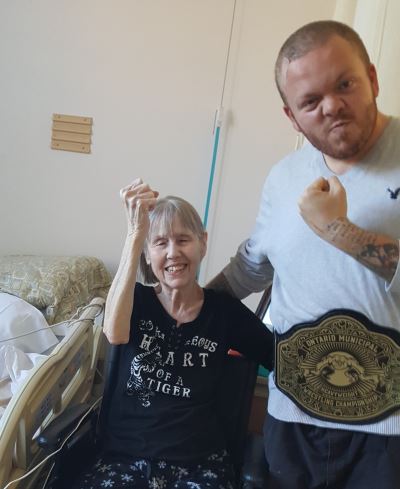 Leigh Bursey with his grandmother Margaret after Leigh won the Ontario Municipal Heavyweight Championship, which was a commemorative title awarded to the winner of a councillor vs councillor match he participated in last year. Margaret was in the hospital having hip surgery and could not attend.

This Saturday, a short, pudgy kid with a big mouth steps into the ring at Kingston’s Leon’s Centre arena to do combat as part of an explosive card of action. My role will be that similar to many others. I will be participating in an over-the-top-rope battle royal, where many other worthy adversaries may very well see me as easy pickings, and low-hanging fruit in a battle for a future championship match.

To me, win or lose, this match and this experience could not mean more. You see, Chinlock Pro Wrestling is promoted and orchestrated by a collective group of badass dudes who care about professional wrestling, just as they care about their community. Saturday’s special House of Hardcore/Chinlock Pro Wrestling cross-promotion is entirely non-profit and will benefit Kingston area charities like Community Living and Youth Diversion. As well, the entire afternoon affair includes not only a stacked card of talented gladiators doing battle, but also a “Legends Convention” that will feature talents I grew up watching and admiring.

They say to never meet your heroes. Yet, on Saturday I have the opportunity to wrestle on a card built around many of them, at an event that will help ensure that many other less fortunate people get to live comfortably, have options in their lives, and chase their dreams.

So yes, of course I want to win! Or at least give it my best shot and not go down without a damn fight.

But that’s not the only reason this matters to me. It matters because someone special will be watching at ringside.

My grandmother introduced me to professional wrestling. She was the smartest woman I had ever met. She knew the right words, and spoke them well. People liked her and admired her.

When I was but a wee lad, my communications skills lacked. I would get nervous and stumble while reading aloud. I would feel embarrassed and turn introvert, and eventually under-perform in school.

Things were tough for my family, and in many ways they still are. I can remember when our cable was cut off in 1996, just as I had finally began to bond with my peers around the unreal world of professional wrestling. I worshiped “Heartbreak Kid” Shawn Micheals and maintain to this day that his “Iron Man Match” against Bret “Hitman” Hart was everything that dreams are made of.

Finally I was cool, only to watch the cable company take my only escape away. I can remember vividly how my grandmother Margaret told me not to be disappointed. She taught me to celebrate the small victories, and in doing so actually bought me my first WWF Magazine.

Shawn Michaels emblazoned on the cover, as his boyhood dream had come true at WrestleMania XII and he was now the World champion. He was the man! I desperately wanted to know what was inside those pages so I spent countless hours each evening sounding out snapmares and sharpshooters.

I desperately craved an escape!

Today, I am an author, an editorialist, a talk-show host, a musician, an activist, and a politician. Everything in my life I owe to my ability to connect with people, to inspire others by way of speaking or writing.

And today things are different.

My grandmother is suffering with a rare neurological disorder called Huntington’s disease. It causes a complete neurological breakdown. She can no longer walk distances without support, and her memory is failing her more and more each day.

Worse yet is that she may not be the only one in my family struggling, and the future for all of us in uncertain right now. So thus, our desire to make memories has never been more aggressive.

Saturday, Margaret will be there at my match in Kingston. Both to meet our heroes who connected us when times were tough, and to cheer me on as I likely receive the pummeling of a life time.

Win or lose, I am a champion in her eyes.

It seems that when all logic begins to seep away and her ability to remember the basics continues to decline, for whatever reason the unreal world of professional wrestling still seems to resonate with her. She remembers her favourites better than she remembers days of the week or when to take her medications. 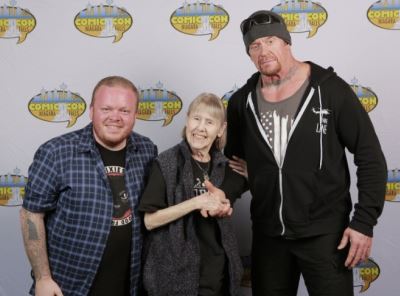 Margaret and Leigh meeting The Undertaker, who is her all time favourite, at the Niagara Falls Comiccon in May 2019.

In some ways, this is more real to her now than it ever was. Just as it was to me when I lived vicariously through my preferred superstars as they battled in the pages of my colourful magazines.

It would be nice to win and dedicate my victory to her, but again, I have no grand expectations and I recognize my experience is limited. As a fan, I already know the animosity of seeing part-time performers win accolades on the backs of those that break their bones and their hearts to capture ours.

Yet, win or lose, it isn’t a title belt or main event that drives me to compete. It’s a hope that she remembers me as her favourite wrestler long after she forgets me as her grandson. 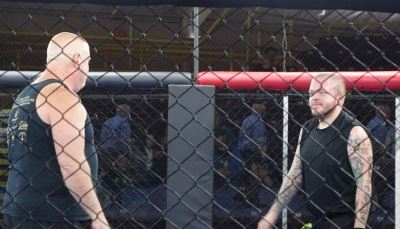 A councillor vs councillor match in Brockville in May 2018 with former Smiths Falls town councillor John Maloney, left, against Leigh Bursey.

On Saturday, a grandmother struggling with her mind and body, and a nine-year-old kid who lives in the fantasies illustrated through the pages of Raw Magazine get to enjoy a moment where they both live through a man who isn’t afraid to bleed nor fail to make the moment count.

I have no illusions of grandeur, but I plan to fight like this is my “Iron Man Match.” Like I am nine years old again, and the only place to make my dreams come true is in a ring in front of masses all seeking an escape.

This is my WrestleMania!