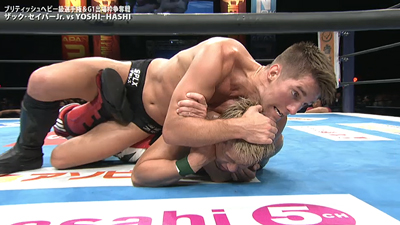 Kizuna Road 2019 continues with the June 25 event taking place in Miyagi at the Sendai Sunplaza Hall. No English commentary on this one in a card.

Main event: British Heavyweight Championship and a spot in the G1 – YOSHI-HASHI vs. Zach Sabre Jr.

Probably a safe bet with these multiple restrictions on the winner of this match that ZSJ is going to retain. YOSHI comes out with his left shoulder heavily bandaged. ZSJ comes out in his Suzuki-Gun black trunks.

We start out with ZSJ utilizing his ground skills. After getting tied up at the ropes, YOSHI counters a hold, shoves ZSJ to the ground and both release their holds and restart at the center of the ring.

YOSHI uses his strength for a bodyslam and gets the advantage. The two trade strikes with YOSHI getting the better with a nasty chop.

ZSJ locks in a leglock using the ropes for leverage while Red Shoes finally gets the break he asks for. Zach takes the fight outside and continues to work on YOSHI with kicks. Red Shoes starts the count and YOSHI gets into the ring at 15.

Zach goes back to work on the legs with a modified Figure Four. We’re at the 5-minute mark. A bunch of kicks and another leglock and ZSJ continues his dominance. The ankle now gets wrenched and Sabre continues to pull apart YOSHI’s legs before HASHI gets to the ropes to cause a break.

YOSHI finally gets his fighting spirit and hits a suplex to buy him some time. He’s still favoring his leg but a few strikes to ZSJ’s upper body and a rolling necksnap followed by a running drop kick puts both men on equal footing again. We’re at the 10-minute mark.

A neckbreaker puts ZSJ on the ground. YOSHI goes for a swan dive that he misses. Sabre pulls on an armbar and starts manipulating YOSHI’s fingers before he gets to the ropes to cause a break.

YOSHI goes for a powerbomb but ZSJ catches him in a tringle submission and drags him down to the ground. YOSHI tries to power out and hits a sit-out powerbomb to get some breathing room. YOSHI goes to the top rope again, but Sabre cuts him off.

The two fight at the top of the ropes. YOSHI hits a Diving Headhunter for a two-count. YOSHI then locks in a submission and turns it into a shoulder buster coming off a Tombstone piledriver. He then transitions into a shoulder submission. We’re at the 15-minute mark.

Zach struggles and can’t reach the ropes. YOSHI brings him into the middle of the ring. Zach finally reaches the rope for a break. YOSHI goes right back on the offensive and hits an elbow against Zach’s neck.

Zach continues to wrench and press YOSHI in the hold, but YOSHI finally gets to the ropes for the break. ZSJ takes off his wrist tape but eats a Backcracker and a double knee pinning attempt but Sabre kicks out.

Zach avoids an Enziguri and counters with a Penalty Kick and adds another kick for good measure. We’re at the 20-minute mark. Crowd is chanting for YOSHI. A few chops by YOSHI allow Zach to grab the arm and turn it into a debilitating stomp on YOSHI’s shoulder.

A few hard slaps to the face and European uppercuts allow YOSHI to go on the offensive including a nice lariat. Zach kicks out at two. YOSHI goes for another slam but Zach counters into an octopus-like hold. Yoshi’s four limbs are all wrapped up and he can’t escape. Red shoes calls for the bell and this one’s over.

An unexpectedly good performance by YOSHI-HASHI. Typically, he’s there to eat a pin in tag matches and after pinning ZSJ in a tag match to earn this title match it seemed like Sabre would run over him. Not the case. Great work by both men.

Here’s the results from the rest of the card:

Matthew Asher is the sports reporter in Carlsbad, NM. Email Matthew your thoughts or suggestions and follow him on Twitter @Caveman_Masher.