Willie Mack’s career all about ‘opportunity’

Nearly a decade into his career, Willie Mack earned a tryout with WWE’s NXT brand. He spent three days training and showcasing his talents for WWE brass, ultimately making the cut. But mere days before moving to Orlando, Fla., where the company’s Performance Center is based, he got the call.

“Everything went blank,” Mack said. “I heard the guy, Canyon Ceman, [say] don’t plan on coming down. Everything just went quiet in my head… When you get the news that you can’t go, it tore me up inside.”

But less than one week later, Mack found a home with Lucha Underground.

“It started a long time ago, like a year before maybe,” Mack said of how his relationship with Lucha Underground began. “I did a tryout for what was supposed to be AAA USA, [but it] turned out to be Lucha Underground later.”

His NXT tryout was in that same timeframe.

“Lucha Underground was a brand new thing, and it wasn’t even on TV yet,” Mack said. “As soon as I got released [from NXT]… they hit me up [and said], ‘We want to get you on TV as fast as possible.'”

That being the case, Mack said, his biggest takeaway from that time of his career was simply not to give up.

“A door may close somewhere else, but another one will open up at a different time and place as long as you got your heart into it,” Mack said.

Mack has been with Lucha Underground since 2015, though the promotion currently is on hiatus, and said he enjoyed the variety of people he worked with, noting his falls count anywhere matches during seasons one and two and working with Johnny Mundo.

“I was mostly a tag-team dude… I got a one-on-one opportunity, and it was like a big changer for me,” Mack said.

He also won Lucha Underground’s Trios Championship, the first “real national title” he held on a television, on two occasions — first with Dante Fox and Killshot, later with Killshot and Son of Havoc.

Making his way through the independents, Mack signed a multi-year deal earlier this year with Impact Wrestling. He specifically noted the X Division and tag-team scene as personal draws for the company.

“Impact is pretty much one of the top [companies] out there,” Mack said. “There are good people, good wrestlers, great matches. The roster is unbelievable.”

In his time with the company so far, Mack has teamed with Rich Swann and worked alongside the likes of Tommy Dreamer, Brian Cage and Killer Kross. He also has crossed paths with Sami Callihan, who Mack will face on Saturday at Chinlock 5 in Kingston, Ontario, with the HoH Twitch Television Championship on the line. Mack said he’s looking forward to returning to Canada, meeting new people and entertaining new fans. But as far as his title defense against Callihan, Mack is ready to get back to beating up his Impact Wrestling nemesis. 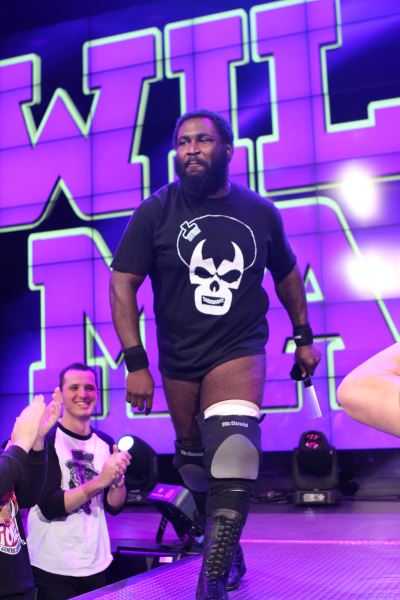 Willie Mack heads to the ring in Impact Wrestling. Photo by George Tahinos

With his Impact affiliation, Mack said he wants to prove that he is one of the best wrestlers. And through Twitch, he said, fans have different ways to watch.

“I can prove my naysayers wrong and give myself the confidence to keep doing it,” Mack said.

In recent months, Mack also showcased his talents in the new era of the National Wrestling Alliance. Billy Corgan, of Smashing Pumpkins fame, purchased NWA in 2017 and shows have been running under his ownership since.

“They showed that they were still around and that they can change the game with the old-school mentality,” Mack said. “When you hear NWA, you think back to Ric Flair, Dusty Rhodes… I was all for it when they came back.”

Mack also was featured in an episode of NWA’s web series Ten Pounds of Gold, defending the NWA national heavyweight championship. He won the title, which had been vacant, in a bout against Sam Shaw in October. Mack defended the championship in five states before losing it to Colt Cabana in April.

“It was good because it’s the revamped National title, and I’m pretty much the first one,” Mack said. “Everybody else had it before, but this is a brand new thing that ain’t ever been out.”

Throughout his journey, the highs and the lows, Mack’s connection with the wrestling industry has been rooted in childhood fascination. And it was one of his high school teachers who helped Mack get his start. Mack got his first taste of training on a day when school was out, but after graduation his training began with Revolution Pro Wrestling in California, followed by Alternative Wrestling Show.