There’s nothing like a good trip down memory lane, and this is definitely the sentiment while reading WWE Smackdown: 20 Years and Counting. It gives plenty of detail about the crazy storylines and insane matches that went on throughout the years. What’s more, its foreword by one of the greatest wrestlers to enter the WWE ring.

In a cool, dark and immortal tone, The Undertaker writes a short foreword on how the reader will re-discover every superstar that journeyed through Smackdown and how some bouts made history. For instance, his legendary battle with Triple H, Stone Cold Steve Austin and The Rock in 1999. The fact that The Dead Man was chosen to write this little introduction, the expectation was that the book would feature everything we needed to know about the “blue brand.” 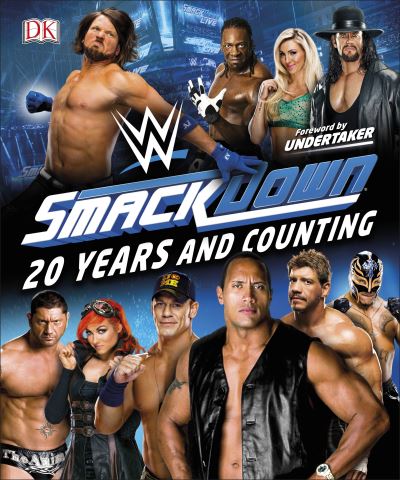 The entire book is broken down by year, starting from the birth of Smackdown in 1999. Throughout these little chapters, the authors, Jake Black, Jon Hill and Dean Miller, write out each episode by the week, which makes the storylines easier to follow.

There were historic scenes I had already known from watched old matches, but when reading about them I felt the need to get on my computer and head to YouTube or the WWE Network to re-watch some classic match ups.

Nothing is more exciting than a ring that’s engulfed in flames, and that’s why the Inferno Match of Kane and Triple H will always been burned in my brain. We have yet to see such a thing happen again in the WWE because it seems so dangerous. When I watch this event on TV or online, it opens my eyes to how different things were when Smackdown first came into fruition and made me wish how we would see more matches like that today. I don’t think there is a single fan that would disagree.

The book, published by DK Books and clocking in at 200 pages, was also a learning experience for me, as there were some wrestlers who debuted in the early beginnings that I hadn’t heard of. It may seem odd coming from an avid wrestling fan, but in 1999 I was just learning my ABCs.

One of those characters was Rikishi. This mountain of a man intrigued me to learn more about him and piqued my interest to see more of his in-ring ability. That’s one thing you can’t get from a book. The details of the matches do paint a picture, but there’s nothing like watching old WWE matches.

There were other characters, like Paul Heyman, whom I already knew about but I didn’t know their background or how they got started in the WWE. From owning and running ECW to becoming a ring manger for multiple stars like Rob Van Dam, Kurt Angle and CM Punk, it’s fascinating to watch his career go through different stages (but it does not address his role behind the scenes as a key Smackdown writer). We see many wrestlers go through multiple phases in their careers, but we don’t always think about the valets or commentators. Little details like this are what took me on a journey in this book from cover to cover.

Although the creative storylines are fiction, the WWE doesn’t have so much romance between the characters presently, but they definitely did back in the day. I enjoyed reading about Triple H and Stephanie McMahon’s roller-coaster of a relationship, which was briefly interrupted by Kurt Angle. The most comedic of them all was in 2007, when Mr. McMahon discovers that he has an illegitimate son who turned out to be Hornswoggle. Applause is necessary for the creative team to come up with tales like this, as it kept all of us fans entertained for years.I would be lying if I said that I didn’t find this book stimulating and exciting, and undoubtedly one of the best about wrestling. However, there were a couple of things that I thought should be included, but were not.

Paige is arguably one of the superstars that had a significant career. She went from being an amateur wrestling in England, traveling all over the world, to landing a WWE contract and training at NXT. There’s something to be said about debuting on the main roster and winning the Divas Championship the same night. Although the book does give a short bio on her when she was introduced in 2014, they could have outlined her career more as the years went on. Paige is very different from the other women on the roster, notably when she debuted, and was a role model for those who felt like they didn’t fit in. She made history in and out of the year and I felt that should have been demonstrated more than it was.

Another thing I would have liked to have seen were more descriptions of the pay-per-views throughout the years. These events include some of the most interesting and memorable matches in the WWE. Especially towards the later years, I felt that these little blurbs describing what happened at, Money in the Bank 2010, were lacking.

Some of the bigger pay-per-views like WrestleMania were mentioned, but we weren’t given any details on the results. Another example was the all-women’s pay-per-view, WWE Evolution, which also wasn’t mentioned. This was a historic time for all of the female superstars and it was worth talking about, even to mention what it meant for these women going forward.

If you’re someone who has been following the WWE for years, this book is a nostalgic treat. For those who are new to sport entertainment, it may be hard to follow, but it will give you a little taste of this world and make you want more.