Back in the days of yore, when World Wrestling Entertainment still had a monthly magazine, many readers would immediately turn to the trivia page to eagerly test their vast wrestling knowledge. This was a time before the internet and the WWE Network, so you had no real means of quickly verifying a question that had you stumped. You had to really know your pro wrestling. 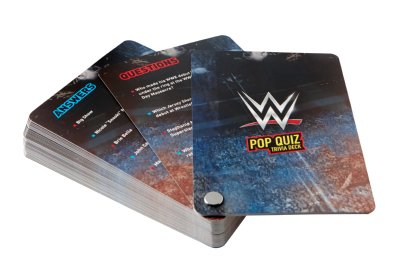 Eric Gargiulo was one of these wrestling trivia geeks. Taking it a step farther than most, as a kid he would often make up his own trivia, write it out on cards and host trivia sessions with his friends during breaks at school. Now his skills have come full circle as he is the author of the first ever WWE Pop Quiz Trivia Deck, released by Insight Editions.

Gargiulo, who resides in Royersford, Pennsylvania, was first introduced to professional wrestling by his father.

“So, my dad had wrestling on the TV in his bedroom and I just happened to walk by, I want to say this was 1982,” recalled the 46-year-old Gargiulo in a phone interview with SLAM! Wrestling. “And there was this interview, I’ll never forget it, with the Wild Samoans, Blackjack Mulligan and Captain Lou Albano and they were promoting a match at Madison Square Garden against, I think it was The Strongbows and Andre the Giant. And I was just scared to death of the Samoans and Blackjack Mulligan, totally scared to death, but I liked it. There was just something about it that just kind of drew me in.”

Gargiulo’s love of wrestling, in particular the antics of Ric Flair and “heel Roddy Piper,” grew and his passion extended into his professional life. In the late ’90s he worked in the original Extreme Championship Wrestling (ECW) as a ring announcer. The gig resulted in countless and memorable hours spent with ECW owner, Paul Heyman. Gargiulo enjoyed watching the infamously talkative Heyman as he would come up with show lineups, sometimes when the show had already started and navigating the personalities on the roster. The experience also led to more rounds of wrestling trivia during road trips with the promotion and an angle with ECW original Tommy Dreamer.

“I’d always been friendly with Tommy Dreamer so there was a level of trust there,” explained Gargiulo. “But there was one show and I remember Gabe Sapolsky, who is now a booker in WWE, he was the camera guy at ringside and he had said to me in-between the matches, ‘During intermission you’re doing an angle with Tommy.’ And mind you, I had no idea what that was. So I went in the back at intermission and Tommy Dreamer came up to me and said, ‘Hey, we’re going to do this angle and just roll with it and when it’s time I’m going to give you a piledriver.’ So I was like, ‘Okay.'” 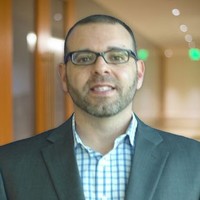 Gargiulo continued, “So Tommy came out and I kind of just followed his lead and he would give me like some openings to say something that would get me some heel heat and I was kind of smart enough where I could just say something really simple and just watch and see. So I would say something and he told me my tagline was, ‘You wouldn’t hit a guy with glasses, right?’ And then he would take off my glasses and give me a piledriver. And that was awesome to just be part of the show and do that around the circuit. It’s just kind of cool to have that very minuscule footnote in ECW history.”

Gargiulo would leave the land of extreme and get into wrestling commentary for a variety of independent wrestling promotions including Ring of Honor (ROH) and Combat Zone Wrestling (CZW). He moved onto radio, hosting Pro Wrestling Radio for about a decade every Saturday. He then took ownership of the show and changed the format to podcasting. In addition, he created the pro wrestling focused Camel Clutch blog. In the last few years, Gargiulo admitted he has gotten away from wrestling, focusing on his full-time job as a digital marketer in the financial space, which he’s done for over 10 years now. But when Insight Editions contacted him about the trivia deck project, he was quickly drawn back into the world of the squared circle.

Armed with years of wrestling trivia experience, Gargiulo submitted some sample questions and a book outline to the publishers who in turn took the material to WWE for approval. After getting the green light, Gargiulo estimates it took about three weeks to get his first batch of questions in, adding that he presented more than the 195 questions and answers that ended up in the final product.

“I sat with a spreadsheet and I just started writing questions on things that I knew and that I thought would be fun,” stated Gargiulo. “I don’t want to say easy, but not hard, kind of mid-ground questions. So I started writing them down and cataloging them and then eventually I would look at my sheet and kind of see where I had gaps in eras that needed questions. Then I would start to just write stuff down that I thought was right and then I would research it just to make sure that I was right on how I remembered it.”

And while Gargiulo admits he has a penchant for early ’80s wrestling trivia, he wanted the deck to appeal to all wrestling fans.

Gargiulo says he had some initial trepidation about working with WWE on the project, thinking the organization would act as strict overlords over his questions, but to his surprise and delight, he found WWE to be professional, accommodating and helpful during the entire collaboration.

“I thought, ‘My gosh they (the WWE) are going to make me ask you know 75% John Cena questions or something like that,'” he confessed with a laugh. “But no! Not at all! They were great! They only time they asked to take something out was if the answer might have been a little subjective, but otherwise no. You know, with that said too, I also approached it understanding who was editing the book. I didn’t submit any questions that I thought would be controversial or that I thought would maybe ruffle some feathers. I mean, I know the way the game is played.”

Gargiulo points out that one example of controversy he had to face was how to incorporate Hulk Hogan into the trivia. Gargiulo began working on this project in the fall of 2017, a time when Hogan was still not in the good graces of the WWE after racist comments he made went public.

“It was kind of hard to write a comprehensive WWE trivia game without Hulk Hogan in the game so I put him in there,” remarked Gargiulo. “I thought they (the WWE) were going to make me take him out, take questions related to him out and they didn’t. At the same time, I didn’t overload it with Hulk Hogan questions with that understanding.”

After having approximately three or four editing cycles with the publisher and WWE, Gargiulo submitted his final draft in the late fall of 2018. After the initially planned release dates came and went, Gargiulo waited patiently to see the finished product which finally came out in March of 2019. Understandably, he was quite ecstatic upon receiving his copies of the deck.

“I think it’s great,” he said unabashedly. “I didn’t know what to expect. That’s the other part about this project, once I hand in my stuff, and my stuff is all on Word documents so I don’t know how it’s going to turn out! I had heard different ideas around presentation along the way, but I didn’t know until I actually got my copies in the mail. And I love it!”

As for upcoming wrestling projects, Gargiulo says he would love to make another trivia deck as he still has ample trivia to share with wrestling fans. He would also love to publish a book he’s been working on “that has been burning a hole in (his) hard drive” consisting of pro wrestling interviews from his radio/podcast days.

“It’s just so crazy, ironic that like 30 something years later this opportunity would come full circle,” concluded Gargiulo. “It’s really bizarre how it all worked out.”