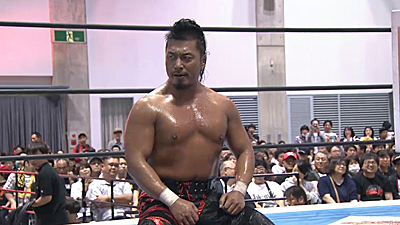 Ishimori used his speed and agility to counter Takagi’s pure brute strength. Takagi catches Ishimori in a leap frog slamming him into a corner with authority. Takagi plucked Ishimori right off the top rope dropping him on his knee and skewering him with a DDT.

With both men sporting injured necks, Takagi was the first to make the spine his focus. Ishimori returned the favour though giving The Dragon a scissor lock neck snapper. Ishimori hooked Takagi in the ropes. He ran hitting his German Suplex off the ropes.

Pacing at ringside, Ishimori threw off his imaginary gloves. Ishimori whipped Takagi into a steel ring post, choked him over the middle rope and rammed his head, neck into the turnbuckle. The Dragon responded with a Death Valley Driver on the ring apron.

A sliding lariat by Takagi almost pins a wobbly Ishimori. The Dragon absorbs a DDT suplexing Ishimori to the mat. Takagi rises to his feet holding his neck. Takaki takes a Canadian Destroyer, pops up and clobbers Ishimori with a Pumping Bomber.

Ishimori kicked out of a second Pumping Bomber. Takaki stops a Bloody Cross pinning Ishimori with a Last of the Dragon.

The other NJPW superstars who have won The Best of the Super Juniors with a flawless record are Jushin Liger in 2001 and Prince Devitt (Finn Balor) in 2013.

Following their tag match tonight, Taguchi offered his hand to help Ospreay up. When Ospreay refused, Taguchi stepped on his ankle, put him in ankle lock. A limping Ospreay had to be helped to the back by his Chaos stablemates Rocky Romero, Tomohiro Ishii and a Young Lion.

The final A Block standings are:

A very strange ending to this one. Tigers clips Titan with two stiff kicks. Tiger Mask looks for the Tiger Driver. Titan backs him up into the ropes freeing himself. Tiger Mask labels Titan as he runs in with a kick to the stomach. Titan arm drags Mask over. The two roll around, Titan is on top of Mask. Mask clearly kicks out and even rolls over on his one shoulder. The referee still counts three. Titan is not happy, shaking his head, ripping off some of his wrist tape. Tiger Mask pleads with the official saying his shoulder was off the mat. As Titan leaves they continue to have words.

Sho gets the better of Gresham with the Shock Arrow.

Dragon Lee has Scurll pinned with Desnucadora. Brody King pulls the official out of the ring. Lee dives into King knocking him out with a suicide dive. Lee helps the official back into the ring. Running bare bone knee strike and another Desnucadora gets Lee the victory.

Yota Tsuji, Shota Umino, Bandido and Ryusuke Taguchi beat Yuya Uemura, Tomohiro Ishii, Rocky Romero and Will Ospreay. Umino pinned Uemura with a Fisherman’s Suplex. Taguchi and Ospreay go at it on the floor. Tsuji took some shots at Ishii too.

Suzuki-gun (Taichi and Douki) defeated Bullet Club (El Phantasmo and Gedo). Gedo puts on his brass knuckles. Taichi grabs his microphone stand. There is a standoff in the middle of the ring. Taichi drops his weapon. Gedo doesn’t. Taichi super kicks the brass knuckles out of Gedo’s hand. Gedo submits to the Stretch Plumb.