Best of the Super Jrs. Night 12: Taguchi and Ospreay to meet in B Block final, Phantasmo’s run ends 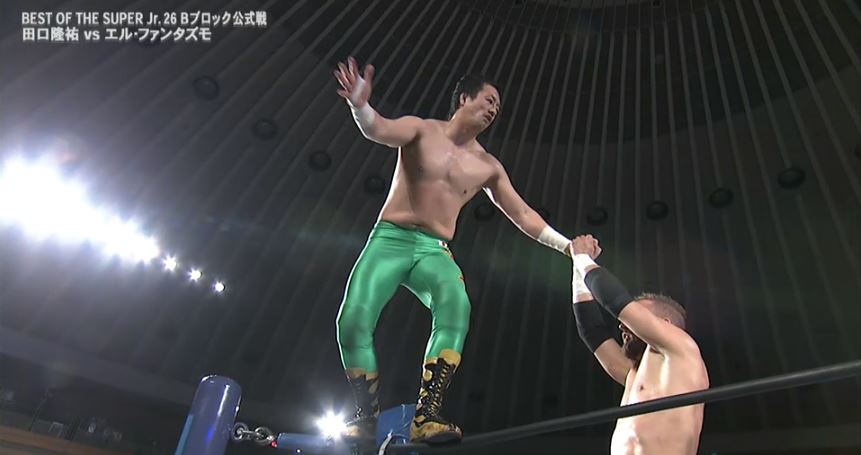 After starting the tournament with such promise, Canadian Phantasmo has lost his third match in a row and is out of the Best of the Super Juniors tournament. He finishes in second place tied with Robbie Eagles, Bushi and Yoh.

Even at 12 points a piece, Ryusuke Taguchi and Will Ospreay will meet to decide the winner of B Block.

Canadian Phantasmo started his match with Taguchi being heelish. He kicked the ropes in the groin of the Young Lion carrying out his gear out of the ring.

“Pass it to me,” says Phantasmo to Taguchi asking him to throw his rugby ball to him.

At first, Phantasmo throws it back. During the second pass Phatantasmo punts the ball down the entrance way and into the backstage area.

Taguchi kicks Phantasmo in the stomach punishing him with a wrist lock. Phantasmo reaches the ropes to stop a nasty ankle lock.

Phantasmo mocks the crowd as they call out Taguchi’s name.

“A great talent but an obnoxious personality,” says Kevin Kelly of Phantasmo.

Phantasmo tries to break out of leg lock by using a handstand. Taguchi stops him each time by spanking him.

Phantasmo claps Taguchi on the back as he gets stuck in a loop running the ropes until he is out of breath. Phantasmo drops down. Taguchi trips over him collapsing to the mat. Phantasmo gets a two count.

Phantasmo gives Taguchi a little of his own medicine with some hip attacks.

Shaking like a Chihuahua all the way, Taguchi walks the ropes until he slips off crotching himself. Ouch.

Phantasmo makes him ride the ropes. Taguchi drops to the floor.

“Hey, look! A fan!” shouts Phantasmo getting the official to look behind him. As he does, Phantasmo knees Taguchi’s crotch. Ouch.

Rolling Taguchi back into the ring, Phantasmo leads the crowd in a cheer…for himself.

“Why did you do that, Taguchi, you big dumb idiot?” asks ELP.

Taguchi’s next hip attack doesn’t miss. A series of hip attacks in the ropes has Phantasmo reeling. A springboard hip attacks results in a two count for Taguchi.

Phantasmo shoves Taguchi into the ring post landing a moonsault from the top rope to the floor. Phantasmo holds his knee in pain rolling around on the floor as Taguchi lays motionless. Robbie Eagles arrives checking on his Bullet Club pal.

ELP super kicks Taguchi in the head, falls over clutching his knee again as Red Shoes looks on with concern. ELP cannot execute either Canadian Revolution as his knee just gives way. He mule kicks Taguchi in the “lower” abdomen to prevent a Dodon. ELP drops Taguchi. He cannot hold him up for the Canadian Revolution airplane spin. Taguchi forces ELP to tap out to the ankle lock.

Narita fights with such heart even though he submits to Yoh. Narita is furious at his loss. He slaps away Yoh’s hand even though Yoh is praising him on a job well done.

Bandido picks up his fourth win of the tournament.

Both men have really excelled in the tournament, Rocky proving he deserves a much bigger push as so many of the fans are behind him. Bushi pins Romero with the MX from the second rope.

Will Ospreay Versus Douki

Douki swings his pipe at Ospreay before he can even take his entrance gear off. Ospreay loses it punching and splashing Douki. While the Young Lions grab a hold of Taichi, Ospreay wins with two super kicks, a Hidden Blade and Storm Breaker.

Los Ingobernables de Japón defeated (Tetsuya Naito and Shingo Takagi) Bullet Club (Gedo and Taiji Ishimori). Gedo is pinned by a Pumping Bomber by Shingo and a roll-up by Naito.