CHIKARA to host Shakespeare in the Square(d Circle)

William Shakespeare will step between the ropes this weekend to referee fights between some of his most well-known creations.

Shakespeare in the Square(d Circle), produced by Renaissance Rumble, will run June 1 at CHIKARA’s Wrestle Factory in Philadelphia, Pa.

Renaissance Rumble founders Joe Grasso and Mike Martin participated in a seminar earlier this year that CHIKARA founder Mike Quackenbush held in Maryland. It was then that Quackenbush asked Grasso, who was wearing a Renaissance Rumble shirt, about the group and expressed interest in collaborating. 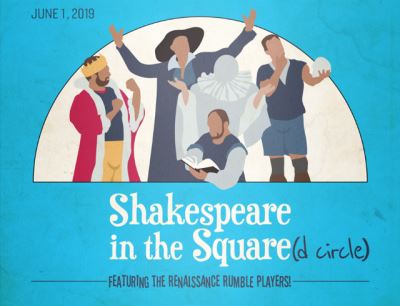 Shakespeare in the Square(ed) Circle

“This is the seminal moment or the first step we have in solidifying what this [show] looks like,” Martin said.

It has been neat to work with Quackenbush and see how his mind works, Martin said. Quackenbush, according to Grasso, also has “that Willy Wonka-esque brain of his with pro wrestling.” Grasso and Martin’s thought processes, according to Martin, are similar to Quackenbush’s in the sense that they can take the medium of professional wrestling and showcase it in a way that it reaches people who aren’t necessarily wrestling fans. 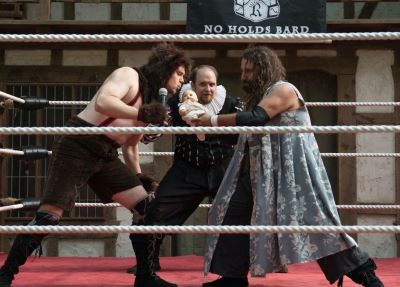 “Here’s a sight for thee; look thee, a bearing-cloth for a squire’s child!” Now bring that baby over here and let me give it a little kiss!

“And to have someone like him, when we talk and see it through each other’s eyes, it’s invigorating because it’s fun to see,” Martin said.

The show itself is structured like an anthology, with Shakespeare playing host. Shakespeare, according to Martin, connects everything together while also taking on the referee role.

“There’s a little bit of play between the characters and Shakespeare in terms of, he’s here to present these scenes, the fights, in the way he intended them to be, as seen in pro wrestling,” Martin said.

Most of the action happens in the ring, though dialogue is delivered mostly “promo style” into or around the audience.

“We play with the different levels [of dialogue],” Martin said, “and it’s used for comic effect and dramatic effect as well.”

The production also is one in which the “dichotomy switches,” Grasso said. One scene features parodies of 1980s-era Hulk Hogan and Randy Savage within the construct of Macbeth, while a scene from Romeo and Juliet features servants as “Shakespearean actors who just happen to wear lucha masks” and wrestle in a lucha libre style.

The beauty of the show at the festival, according to Grasso, was that it “merged an interesting crowd” of wrestling fans and “Shakespearean nerds.”

“There’s this combination of fans that didn’t realize both had so much in common,” Grasso said.

The “intermingling” of people who like wrestling and theater is unique, according to Martin, when it comes to the Renaissance Rumble.

“Breathing life into this is something that is an important aspect,” Martin said. “For someone who’s a theater major and comes from that background, it’s always fun to see ways to liven up and freshen up old material and have people go, ‘Wow, this is what people need to see so it connects today, so it resonates with them.'”

For more information or to purchase tickets to Shakespeare in the Square(d Circle), visit the CHIKARA website.